Oh, What a Lovely Cosplay This Wheelchair User and Mad Max: Fury Road Fan Made 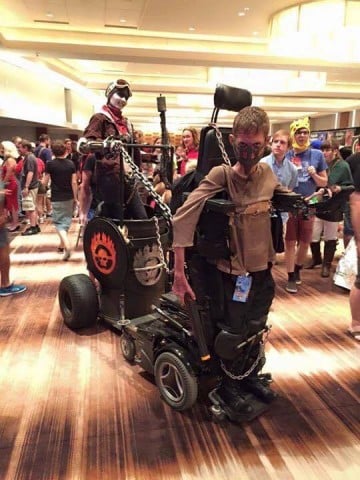 The moment Max Mad: Fury Road came out, we all started planning our Warboy and/or Furiousa costumes (for conventions, Halloween and beyond!), right? (Some of us took it to the next level and made go-karts.) But it’s doubtful we’ll ever be able to outdo this awesome 20-year-old fan, who turned his wheelchair into a brilliant ode to the movie.

As The Mighty reports, Florida-based student Ben Carpenter has been going to cons all summer dressed as Max and in an amazing rig (or, as he calls it, a “Bloodbag chariot”!) that manages to incorporate his standing wheelchair. Ben, who was born with spinal muscular atrophy, even has his own Warboy in friend and fellow Mad Max cosplayer Amy Brumfield, whom he met at Metrocon in Tampa earlier this year.

What’s super cool about Ben and his cosplay tribute to Mad Max is that he keeps stepping up his game as he goes to more and more conventions. While he recently got some new attention at Dragon Con, that version of his rig was actually a new version designed especially for that con. Still, his earlier versions were just as awesome.

A clearer shot of what exactly the Bloodbag-mobile looks like. We're going to keep adding on to it and will hopefully be building a doof-warrior/guitar guy cosplay next! #madmax #furyroad #cosplay #costume #tbcc #tampabaycomiccon #bloodbag #warboy #witness #shinyandchrome #awesomegroup #tbcc #tbcc2015

According to Ben’s Instagram, he’s hoping to build a Doof Warrior rig next, so we’ll definitely want to look out for that. Oh, and apparently he wants to encorporate the rigs in his family’s Halloween plans! As he tells The Mighty, “One of [his] family’s favorite things is to scare people as they come up to [their] house, and the rigs would give [them] a lot of different options.”

(images via Imgur and Ben Carpenter)