Mirror, Mirror On The Wall, Oculus May Be The Scariest Movie Of All 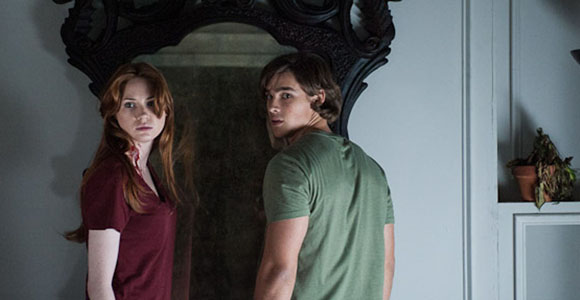 When we first heard there was going to be a horror film starring both Doctor Who’s Karen Gillan and Battlestar Galactica’s Katee Sackhoff, we knew it was a must-see. Lucky for us, we were invited to an early screening of Relativity Media’s Oculus to see the horror for ourselves. We’re not ashamed to say, we’re still shaking in our boots.

[Editor’s Note: This review does not contain spoilers, however, there is a section at the very end which gives a few warning details.]

Full disclosure: I already have an intense fear of mirrors. My family home growing up had one entire wall composed of them so my personal fear response to this film may be peppered by that. But bottom line – Oculus is scary as hell.

And boy, was that a relief. Horror movies are a dime a dozen and I’ve been searching for one to haunt me for a while. While films like Insidious and Paranormal Activity scare me in the moment, their effects don’t linger. Oculus had me shaking all the way back to the office. Which is funny considering all three films share the same producer.

The story, written by Jeff Howard and directed by Mike Flanagan, centers around the Russell family – mom, dad, sister, brother, and dog – whose lives are irrevocably changed thanks to an antique mirror with an extremely dark past. Sackhoff plays the mother, Marie, Rory Cochrane (Empire Records, Argo) plays her husband Alan, Gillan is the modern-day version of their daughter Kaylie, Brenton Thwaites (Maleficent) her brother Tim, while Annalise Basso and Garrett Ryan play young Kaylie and Tim. 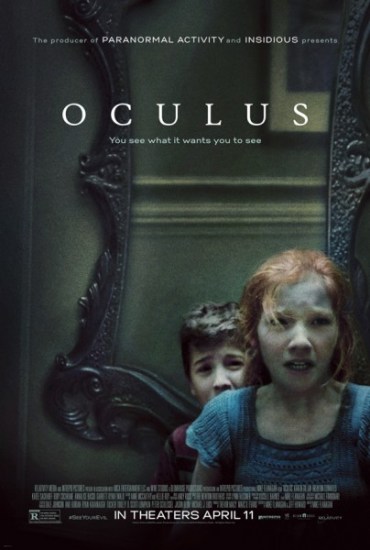 Oculus begins by telling the history of events in our current timeline, Kaylie’s parents are both dead under terrifying circumstances and her brother Tim has been in a mental institution for the last eleven years. Authorities assumed he was to blame but he and Kaylie insisted it was the mirror in their home, officially called the Lasser Glass. Slowly but surely we come to realize Kaylie’s seemingly normal life working with antiques, engaged to be married, is hiding her life’s work – figuring out how to destroy the Lasser Glass. And she wants Tim to help. Perhaps not the best idea for someone fresh out of an institution but maybe he can use his experiences there to talk some sense into his sister?

That view is shown in alternating, sometimes concurrent position to eleven years past, when the family just moved into a new house, the patriarch having purchased a gaudy antique mirror for his home office. But soon we realize the Lasser Glass is home to an unhappy entity bent on destroying the happy home by any means necessary. And then things get…crazy.

I don’t want to give too much too much away for the sake of your viewing enjoyment but suffice to say, Oculus has a unique take and execution on the tired “haunted” plot. Much like the reality of a mirror itself, with Oculus, you can never be sure you’re getting an accurate reflection of things.

The performances were above par for your run of the mill horror acting with young Kaylie (Basso) being the standout for me. As for Gillan, there’s one particular scene early on which will scream Doctor Who to fans of the long-running series, but otherwise you’ll forget about Amy Pond. Partly due to Gillan’s American accent, but mostly because you couldn’t imagine Amy doing anything this dangerous (at least without aliens involved). Sackhoff also pulls impressive weight by playing a woman who slowly dissolves due to extraordinary circumstances.

Oculus is in theaters today. See it if you’re looking for a smart horror film to creep the bejesus out of you.

And now, “A List of Things For People Who Can Handle Scary Movies But Not If They Have X, Y, or Z.”

Some of these items may be considered spoilery for those who want to go in fresh, but I know a lot of folks who would prefer to know going in if there were certain horror movie staples they wouldn’t be able to handle. Do not read any further if you don’t want to know those specifics. They are: