5 Things We Learned at the NYCC GTAV Panel

No, none of them are "How to effectively hotwire a car in under 20 seconds," sadly. 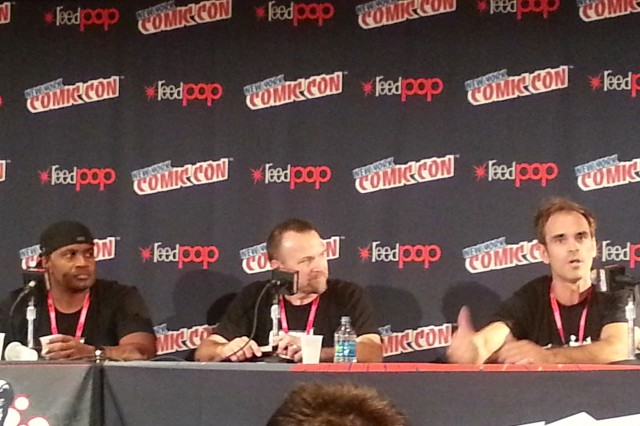 Yesterday, Geekosystem was able to hit IGN’s GTAV panel at New York Comic Con, and it was probably the raddest thing of all time. Hosted by IGN’s Greg Miller, GTAV actors Ned Luke (Michael), Steven Ogg (Trevor), and Shawn “Solo” Fonteno (Franklin) took the stage, and the gamers went wild. Here’s what we learned (see, GTAV can be educational, you guys!)

1. These guys are rockstars (no pun intended)

I’ve seen a lot of panels in my time (nerd alert!) and none of them has ever started like this. Upon walking into the room, Luke, Ogg, and Fonteno were greeted by a crowd which I imagine is pretty similar to one you’d find at a One Direction concert. They were immediately mobbed by the audience for photos, videos, and adulation – and, honestly, the guys were beyond cool about it. The panel started about 20 minutes late because all three actors were so kind with their time, autographing games, handing out signed photos and t-shirts, and taking photos with fans. No one really wanted to listen to Miller when it was time to get the panel started!

The actors were surprised and thrilled by the fan response, too. “This is unbelievable, man,” said Luke. “I cannot believe the kind of fans we have. I mean, who are we? We’re just guys playing GTAV. Ya’ll are the guys who made it happen.” Cue fan cheering. 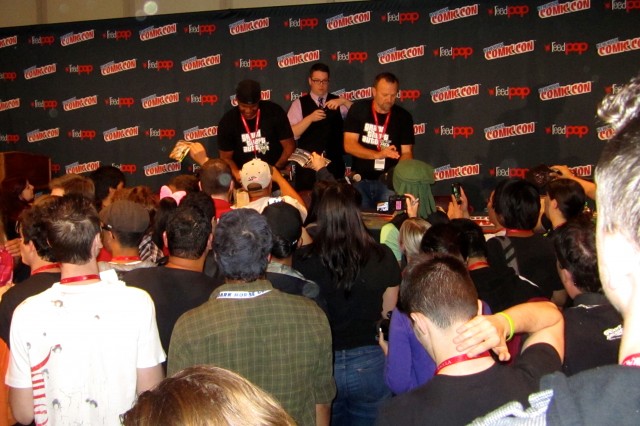 2. They hate it when you call them “voice actors”

Because these guys were not voice actors – they were full out, Andy-Serkis-as-Gollum motion-capture actors, during their 3-year filming process. “It was a lot of imaginary sh*t,” said Fonteno. “We had to sit on a f*cking crate and imagine it was a f*cking car. We really brought ourselves to these characters. We brought it to life.”

Ogg agreed, saying, “I’m pushing the performance aspect of it, because these were our faces, our bodies, our fingers, our voices. It wasn’t us sitting there voicing a cartoon character. We are the cartoon characters,” he emphasized. “That is us. So when you’re in a room, which is like, this big, white, with cameras all around it, you’re dressed in head-to-toe spandex, essentially, with balls all over you,” pause for audience laughter, “which never got old after three years.”

“It was a great challenge,” continued Ogg, “because you had to come in that morning, and you better know your character. Because if you’re shooting a film – I mean, for Trevor – if I was wearing some of his outfits, walking around in my dirty underwear, and I had those tattoos on me, and had my head shaved, in a trailer on a set, you can have something to inform your character. To lean back on, your surroundings, things you’re smelling. We had none of that. In motion capture, you’re imagining everything.”

How many hours have you put into GTAV? Like Luke, is it over 100? I imagine for a lot of you, it is. So it’s pretty crazy to see these characters that you’ve become intimately familiar with (I mean, you can make them have sex with strippers or torture a guy with nipple clamps), just up on stage like regular guys. Because of the incredible talent of the dev team on GTAV, the in-game versions of Luke, Ogg, and Fonteno look, move, sound just like their IRL counterparts. The crowd let out a nervous giggle every time Fonteno started speaking because he basically was Franklin. It was just too much. And, along those lines…

4. It is terrifying when Trevor screams in your face 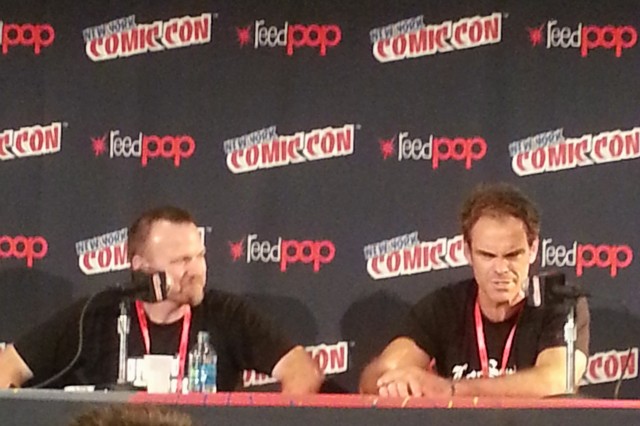 The very best question at the panel came from one dude who just sheepishly asked, “Steven… can you curse at me? Like, you know… tell me to go f*ck yourself, or something?” As the audienced LOL’d, Ogg jumped down off the stage, stormed over to the guy, got up in his face, and – in his very best Trevor – screamed, “Go f*ck yourself!”

As Miller said after, Ogg could charge for that at the Rockstar booth and make a fortune. I need a new voicemail message, come to think of it.

5. GTAV is really a love story

Both on- and off-screen, the guys of GTAV were all about the “broken bromance,” as Ogg described it. They’re seriously BFFLs.

“It was great,” agreed Luke. “I loved Solo from the moment I saw him, and I love Trevor. The relationship part of it came, because Solo reminded me of guys I grew up with, great friends, we hit it off real quick. And I can’t think of any person on that set I didn’t love to death. And it was almost instantaneous, too.”

“I say – it sounds crazy, I know,” laughed Luke, “but I say – GTAV is a love story. It really is. If you want to look at it that way. And that’s how I felt with the interaction with the cast, and the crew, and the director. Everyone was so cool, and ego-free, and just wanted to make the best thing ever.”

(story and image via my own self)