Due to an earlier incident, all trains are now running express TO THE FUTURE 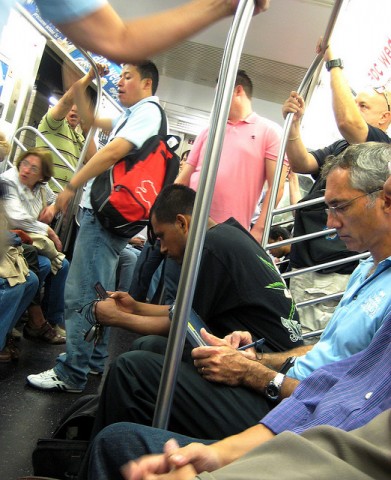 For the last month New York’s transit system has been slowly invaded by visitors from the future, come to offer directions and guide us on our underground journey. After over a year of planning, 18 giant interactive touch-screen kiosks are now up in grand Central Station, and the creators claim they’re finally ready to face commuters’ scrutiny.

The touchscreens are part of a collaboration between the MTA and the technology firm Control Group, which is probably the most horrifying name a company that’s automating the transit system could have. Their partnership means that the city isn’t footing the bill for the futuristic experiment, but unfortunately Control Group will be funding the ambitious undertaking via advertising, so look forward to seeing lots more Dr Zizmor ads.

The kiosks’ arrival comes six months later than originally projected, since that is obviously how the MTA does things, and because the original prototypes failed to account for the hellish conditions of the New York subway.

The refined models have screens with greater durability, and are supposedly  sensitive enough to register light touches from subway clientele who may be unfamiliar with touch-screen technology (looking at you, old people) but not so sensitive that they’re impacted by train vibrations. No word yet on how they will hold up when they are inevitably peed on or scampered across by rats.

Although there are obvious upsides to automating aspects of the subway system (you might avoid resentment-fueled, unhelpful conversations with booth agents), and the automated directions will likely prove useful for tourists. I also suspect the screens will be an excuse for the MTA to let commuters down with more frequency and  anonymity.

Not to mention the germs. Dear God, all the germs.

Gizmodo posted this video showing off the screens on their Vimeo account if you want to see them in action, but don’t actually want to get your hands dirty.

(Via Gizmodo, image via Annie Mole)