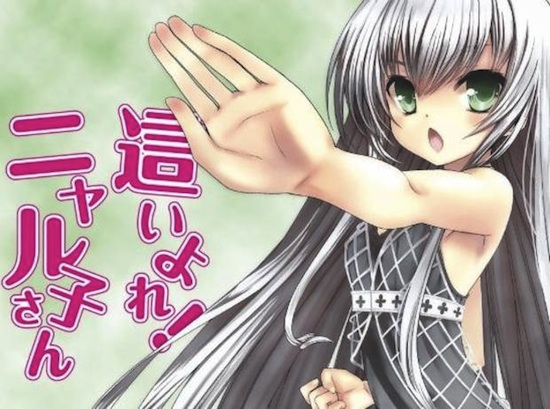 Nyarlathotep, or the Crawling Chaos, or Him of a Thousand Masks, is a malevolent shapeshifting deity in the short fiction of H.P. Lovecraft, appearing in stories like “The Dream Quest of Unknown Kadath” and “The Haunter of the Dark.” Now, Nyarlathotep is getting an anime series of his own, titled Haiyore! Nyaruko-San, in which he takes the form of … a silver-haired loli in a comedic schoolgirl anime series.

Series creator Manta Aisora announced the series via Twitter (and garnered over 100 retweets).

Readers familiar with H.P. Lovecraft’s horror may be familiar with the deity Nyarlathotep, a.k.a. The Crawling Chaos. He/she/it’s a sort of messenger of the Outer Gods that mentally enslaves human beings, usually as a charismatic man. Well, not here. In Haiyore! the abomination takes the form of a silver-haired young girl who saves a high school boy from aliens and takes to hanging around him. Those wacky Outer Gods–you never know what they’re going to do next (probably enjoy some shaved ice and attend a summer festival).