NPH and James Corden Sing Hamilton's 'My Shot,' and More | The Mary Sue 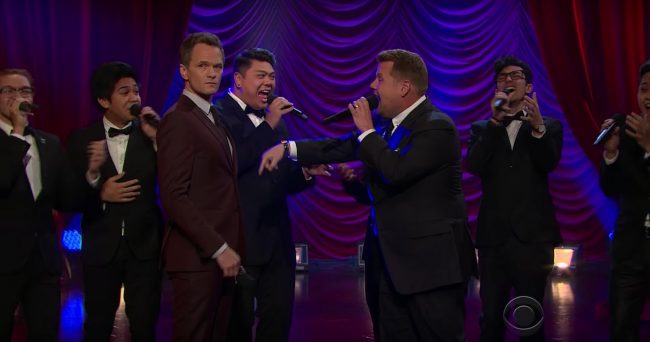 What is it with people interrupting James Corden’s Late Late Show just so they can challenge him to singing duels?

A few nights ago, Corden was just getting ready to settle into a nice joke about acronyms when he was interrupted by none other than Neil Patrick Harris, who wanted to challenge him to a Riff-Off, Broadway style. The two of them, along with a cappella group Filharmonic, jammed out to some of Broadway’s most iconic hits, including “All That Jazz” from Chicago; “On My Own” from Les Miserables; “Everything’s Coming Up Roses,” from Gypsy; and, of course, “Sugar Daddy,” from Hedwig and the Angry Inch (for which NPH won a Tony in 2014).

Fun fact: apparently when Harris dropped to his knees during “Sugar Daddy,” he ended up splitting his pants, “from my ass to my knee,” as he put it in the post-Riff-Off interview. So, you know, if you ever had any doubt as to why he won, there you go.

This being modern Broadway and all, they also ended up joining together at the end in a rendition of “My Shot” from (duh) Hamilton.

As I’m so fond of saying: I’m a fan of both Corden and NPH, and seeing them belt it out like this just makes me very, very glad. Cinnamon rolls, the both of them. Too perfect. Too pure.

It’s also really hard to compare this with one of the last Riff-Offs to happen on the Late Late Show, wherein Anna Kendrick utterly wrecks Corden with some solid pop music.

So, okay. All of this being said, I have to ask: should I go ahead and listen to the Hamilton soundtrack now? I still haven’t heard it, and this is making me wonder what I’m missing. Feel free to drop off your fervent enthusiasm in the comments. I’ll be watching.