Notch’s Latest Project, Cliffhorse, is a Masterpiece of Gaming 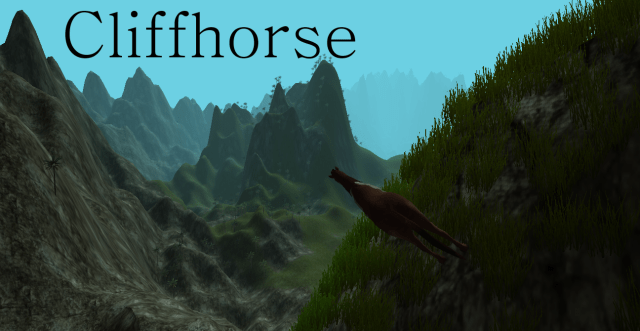 Swedish video game programmer Markus “Notch” Persson first created Minecraft in 2011, and though he’s worked on a number of projects since then, he hasn’t released any new games. At least, not until today! Enter Cliffhorse, the latest Indie game that’s sweeping the nation.

In this gorgeously rendered Unity Engine game, you play a horse in a breathtakingly realistic panorama of beautiful cliffs covered with totally climate-appropriate palm trees and grass. Your objective is to be a horse. There’s a ball, also. You can kick the ball around. But mostly just be a horse. A horse who can stand vertically on cliffs in the exact way that all horses do all of the time. It’s so lifelike, man. I really feel like I am this vertically-climbing horse.

Just astounding. Truly this is the future of gaming.

In reality, Cliffhorse is presumably meant to be a biting commentary on Steam Early Access, which allows Indie developers to release and make money off of unfinished games, many of which are never completed and don’t even work the way they’re intended to most of the time. The Cliffhorse website notes this with a small disclaimer at the bottom of the page, which claims, “No guarantee of future updates.”

Cliffhorse is completely free to download for Windows PC,  though the developers request that you kindly donate a dogecoin to their cause. In fact, Notch claims that he’s already earned up to  280,000 coins ($100), technically making it his “first commercial game after Minecraft.”

(via On the Media and Polygon, image via Cliffhorse)