Is the Norwegian Curling Team Wearing Illegal Pants? (Probably Not, We Hope)

A curling team once bit my sister. 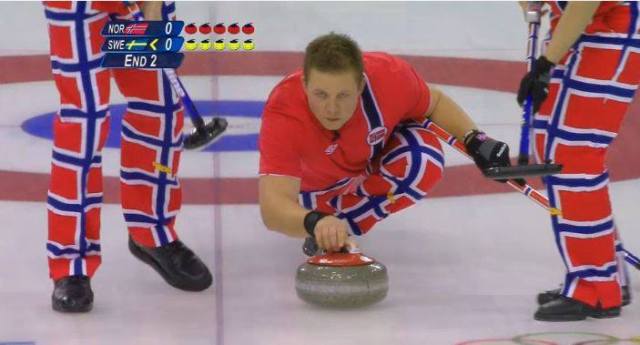 In addition to being a sport that involves brooms and sweeping, curling also has surprisingly strict rules about what constitutes a proper uniform for the sport (you know, so people remember that it is a sport). As it turns out, Norway’s Olympic team might be in trouble, and all because of the funky-fresh pants they’re styling.

The Norway men’s team has been widely celebrated for their unusual fashion choices in the lead-up to the Sochi Games and have even sported the above in competition as their official kit — that’s fancy curling talk for “uniform.” Apparently rumors have surfaced that the International Olympics Committee isn’t happy about it, and other onlookers, such as News.am sport and Aftonbladet, have even suggested that because the team wears a different pair every time they play, the pants might be considered “unofficial” and could be against proper uniform code. But are they?

IOC codes mandate that uniforms must be identical (“All team members [to] wear identical uniforms and appropriate footwear when accessing the field of play for games or practice sessions”), approved in advance (“the colour of these garments shall be registered with the WCF prior to the start of each competition”), meticulously labelled (“Each shirt and jacket/sweater has the player’s surname, in 5.08 cm. (2-in.) or larger letters, across the upper back of the garment”), and even tucked in or out. However, they fail to mention anything specific about whether a weirdly patterned pant might be against policy.

But there’s hope for Norway! As U.S. skipper John Shuster told the Miami Herald, the pants aren’t actually all that distracting during play — in fact, he loves them. “Anytime people are going to talk about curling in USA Today or the New York Times due to wardrobe, it helps bring curling to the forefront, and that’s good. Honestly, when you’re out there, you do not notice them. Not at all.” So even if they are eventually found to be against the rules, they’re at least doing something for the sport.

If you want to buy your own  pair of Sochi Norway pants, you can; turns out they’re actually golf pants made by a company in the U.S. called Loudmouth, and they’ll run you about $110 a pair. That makes more sense to us than we care to admit.

For their part, Norway is protesting this possible IOC decision by choosing to go pants-less at Sochi. No, seriously. We’re not kidding.

(via Policymic, image via the Norway Olympic Curling Team’s Pants on Facebook)