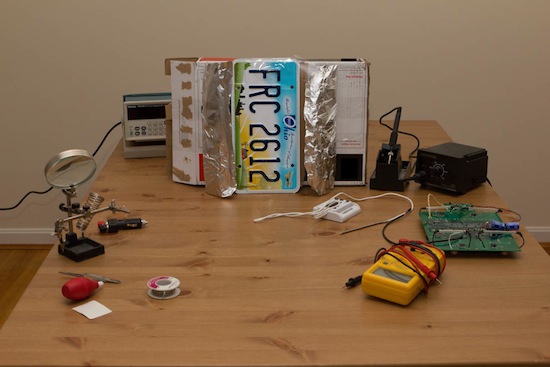 Hidden traffic cameras take all the fun out of driving. Even if it seems like there’s nobody around for miles, you never know when there’s going to be a camera on a traffic light or telephone pole that’s going to snap a shot of you driving just a little too fast. There’s nothing worse than getting a ticket in the mail that you didn’t realize you got nicked for at the time. Jonathan Dandrow knows your pain, and he wants to help: He created the NoPhoto, a license plate frame that detects traffic cameras, and blocks your plate number when big brother tries to catch you red-handed.

In the simplest terms, NoPhoto works as a counter-flash, flooding the plate-area with light and making it illegible for a short time. The frame is equipped with a sensor that detects the flash from a traffic camera, which triggers its own flash on a delay intended to make it go off exactly when the camera would be taking its photo.

Dandrow created the device, not because he wants to get out of a few moving violations, but because he feels that issuing tickets based on images from traffic cameras infringes on a driver’s right to due process. “They are trying to circumvent the constitution,” he says. According to Dandrow, the device is completely legal to use in the US, though that may be because most local and state governments haven’t had to deal with them yet.

At the moment, the NoPhoto is still in the prototype phase. If it sounds like something you might be interested in picking up, Dandrow is currently trying to raise $80,000 on IndieGoGo to cover certification and manufacturing costs. According to the site, Dandrow plans to sell the device for about $350 once it’s complete, but investors can get one for pledge $199. If you want to learn more about the device, you can also check out the NoPhoto website.

Related to Your Interests