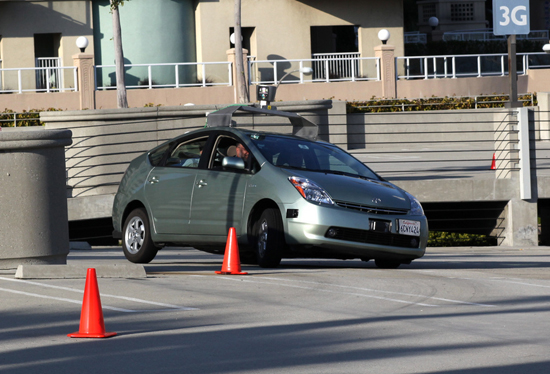 Google‘s been testing self-driving cars for some time now. It is known. Most of this has been private tests, conducted on approved courses. Following in the footsteps of Nevada, however, California has now approved Google’s autonomous cars for their roadways — in a trial capacity, anyway. Google will still be required to have a human handler present to take over if needed, but all the heavy lifting will be accomplished by the car itself. Obviously, Skynet has already won.

Self-driving cars will soon motor around the most populous U.S. state, at least on a test basis, after a law written with the help of Google Inc. was signed by California Governor Jerry Brown.

The law signed yesterday allows trials of autonomous vehicles on the state’s roadways as long as there’s a licensed human in the driver’s seat to take over if needed.

“Today we are looking at science fiction become tomorrow’s reality,” Brown said at a signing ceremony at Google’s headquarters in Mountain View, California.

The handler is really just a formality, however, as Google’s self-driving cars have an impeccable safety record. Those few incidents that they’ve been involved in were all eventually attributed to user error. Garbage in, garbage out, after all.

(via Bloomberg, image via Steve Jurvetson)