OK, I mean, I’m exaggerating: there are apparently a couple of Warner Bros. executives who want to keep milking the Watchmen cash cow. But you know who really, really doesn’t want to see Watchmen on screen again? Its creator, Alan Moore.

CBR has the news that Warner Bros. is making a straight-to-“video” R-rated animated adaptation of the Alan Moore/Dave Gibbons acclaimed graphic novel. Here are the plans:

“A faithful adaptation of the Watchmen graphic novel executed in an animation style that mirrors the source material.” Going by that description, it’s safe to assume Warner Bros. Animation has opted to take a similar approach to the comic as it did when bringing Frank Miller’s “Dark Knight Returns” and Moore and Brian Bolland’s “The Killing Joke” to life; both of those films homaged the respective artist’s style, making changes as needed to properly animate the story.

Cool? The thing is, this might actually be really neat, visually. Gibbons’ style is distinct and dynamic, and if they manage to faithfully replicate it in animation, I’d be curious to see the result.

However, what I’m not sure will work (and a problem with the Zack Snyder-directed live action film) is the dialogue, subtext and deeper story. Watchmen is a complicated, difficult comic that pretty much single-handedly changed the genre, and I believe it is best understood in its totality. Snyder’s Hollywood version cut the “Tales of the Black Freighter” narrative, amongst other changes, for all of the much-touted scenes and shots that were pretty much ripped directly from the book’s pages. Just because you make something that looks like Watchmen doesn’t mean it has the same spirit.

As this thesis on Watchmen explains:

One of the most interesting narrative devices in Watchmen is the frame narrative within the story, where a minor character is reading a pirate horror comic book that provides a parallel symbolism for the actions of several of the characters, such as Rorschach and Ozymandias. The story of “The Black Freighter” is juxtaposed against the current action, including the images from the comic book, creating a dialogue between the two texts.

I think even the most faithful of animated adaptations would have trouble portraying this interplay. But really, what’s the point of making another Watchmen except simply to make more money? Warner Bros. already made a 12-chapter animated series to coincide with Zack Snyder’s Watchmen DVD release.

Alan Moore himself is literally the last man on Earth clamoring to see his masterpiece on the silver screen again. Per CBR:

While Gibbons participated in the production and promotion of director Zack Snyder’s 2009 live-action “Watchmen” adaptation, Moore has made his disapproval of any “Watchmen” follow-up extremely clear. He was once quoted as saying he’d be “spitting venom all over” the Snyder-directed film, and has expressed on numerous occasions his preference that the original story be left to stand on its own.

Alan Moore is just like me, only a wizard. The impetus to use the property to make more and more money despite the very explicit wishes of its creator is clear, and it’s pissing me off. CBR also reports that HBO is in preliminary talks about a goddamned live-action Watchmen TV show. Please, no? And DC is also planning to introduce Watchmen characters in its superhero ‘verse: “… the next several issues of “Batman” and “The Flash” will find the title characters investigating the appearance of Watchmen member The Comedian’s signature “smiley face” button in the Dark Knight’s Batcave.”

The Comedian’s smiley face button inside the Batcave. If that sentence made you queasy, as it did me, I’ll meet you on Mars for a drink and we can talk about it. 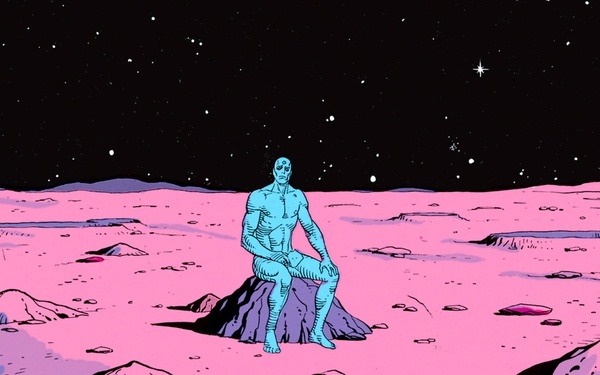