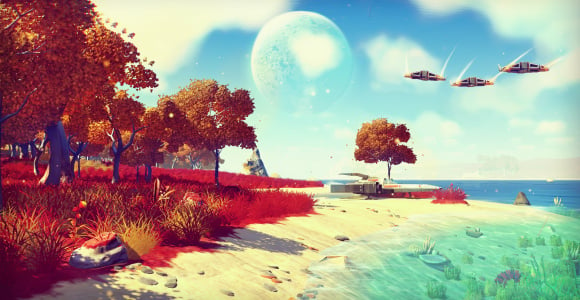 Deflating more than a few expectant gamers’ expectations, Redditor “Daymeeuhn” has “beaten” the hotly-anticipated No Man’s Sky by accomplishing the game’s de facto objective: reaching the center of the universe. According to Daymeeuhn’s Reddit post detailing their saga, it took them only about 30 hours all told, which is a fairly far cry from the original length promised by the game’s creator, Sean Murray.

Daymeeuhn acquired an early release version of the game—which they purchased—and not 30 hours later, set out to Reddit to share their thoughts. The thread, which you can read if you don’t mind spoilers, details a lot of the issues still plaguing the game. Some of the problems Daymeeuhn ran into involve things like ship resource usage, frequent crashes to the PS4 home screen, and some hefty imbalances, the most prominent of which helped them achieve their quick finish.

To be more specific, Daymeeuhn found one item in the game that could be sold on the market for a hefty sum of cash. Seeing as how they were able to repeat the acquisition of this item, it didn’t take long for Daymeeuhn to establish a nice cash flow to grab a lot of powerful ship upgrades, propelling them closer to the universe’s core.

It’s important to remember that Daymeeuhn played an early version of the game, so it’s likely that some of the issues they described will be addressed in a day one patch, which is what Daymeeuhn has urged purchasers to hope for.

It’s true, we’re a little over a week from release at this point, and it’d be a shame to have some of the game’s surprises ruined this close to the date. But if you, like me, have avoided pre-ordering because of some suspicion regarding the incredible hype around this game, then the spoiler thread may assuage some of your fears. Otherwise, I’d recommend avoiding it and just waiting patiently for the next week.