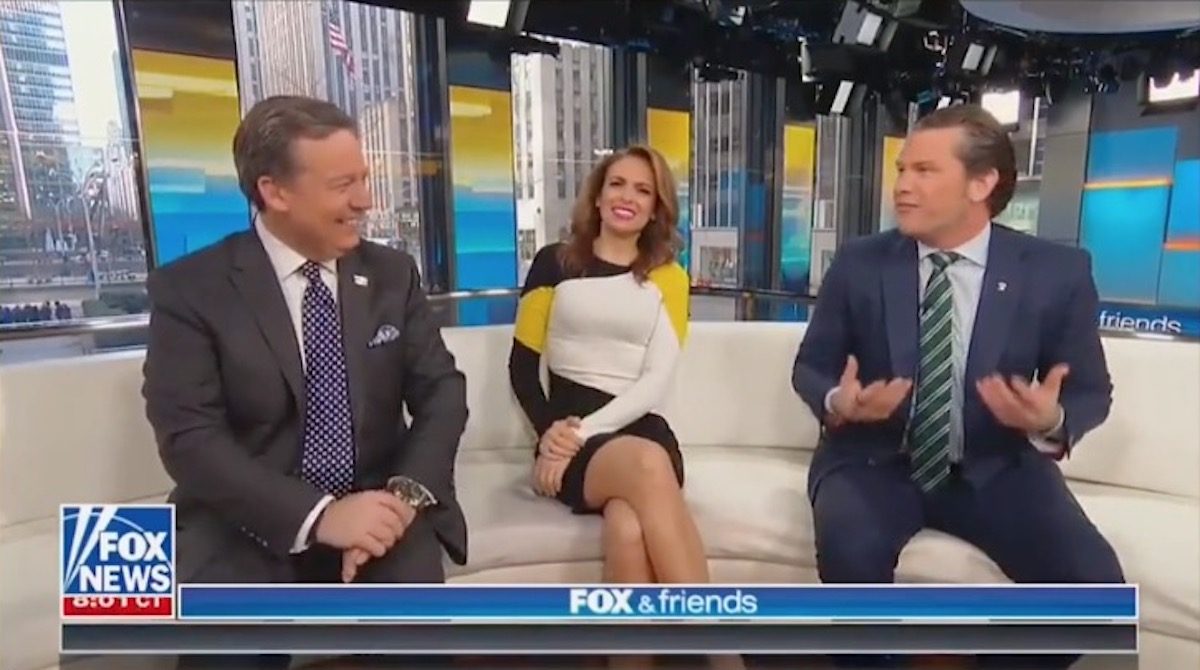 A common refrain from usually conservative politicians and pundits looking to deny human effects on climate change is the old standby “I’m not a scientist, but …” For some reason, we’ve all just accepted that that’s an adequate lead-in to talking about a scientific subject and, moreover, denying the scientific consensus on that subject.

This weekend, Fox & Friends personality Pete Hegseth took “I’m not a scientist, but …” to new levels when he told his co-hosts that he hasn’t washed his hands in a decade, apparently advising viewers to do the same because “germs are not a real thing.”

Fox News’ @PeteHegseth admits, unprompted, that he hasn’t washed his hands in 10 years.

“Germs are not a real thing,” Pete says. “I can’t see them, therefore they’re not real.” pic.twitter.com/9hsAb9YA9j

“My 2019 resolution is to say things on air that I say off air. I don’t think I’ve washed my hands for 10 years. Really, I don’t really wash my hands ever,” he said. “I inoculate myself. Germs are not a real thing. I can’t see them. Therefore they’re not real.”

Hegseth–who has run for a Senate seat and has reportedly been considered for the position of Veterans Affairs Secretary twice–later implied online that he was joking, but for starters, to make it clear that you’re “joking,” a thing should probably be funny, which this was not.

When even @chrislhayes can see the obvious…Twitter really has come full circle. https://t.co/o1dPPaWEhS

He also shared a follower’s tweet and seemed to his endorse his obviously genuine disbelief in germs.

So whether Hegseth was joking or not, he didn’t make that clear enough to dissuade people who may actually believe what he was saying. And by using the depressingly enormous platform that is Fox News to share this misinformation, he’s put us all in a position where we’re actually having to have a conversation about the reality of germs and the importance of washing your hands, like we’re all back in preschool–preschool in the year 1870.

America has become so idiotic that people have to say things like “germs are very real.” We’re not talking about ghosts here, people. https://t.co/IUCFtqGnfr

Thanks to anti-vaxxers, we’re seeing outbreaks of previously eliminated diseases like measles. Hegseth would like those anti-vaxxers to hold his germ-covered beer.

FUN FACT: President James Garfield might have easily survived his assassination attempt in 1881 if people back then had believed in germs. They didn’t, so doctors went into his body with bare hands and he died from infection. So congrats to Fuckhead here. https://t.co/fAIjxdyAoA

Anyway, happy Women in Science Day, everyone! Remember to listen to actual scientists and not Fox News personalities for information regarding personal hygiene or, really, anything else.

It’s somehow just perfect that yesterday a dude on Fox News declared that he doesn’t wash his hands because “germs are not a real thing” and today is #WomenInScience Day.