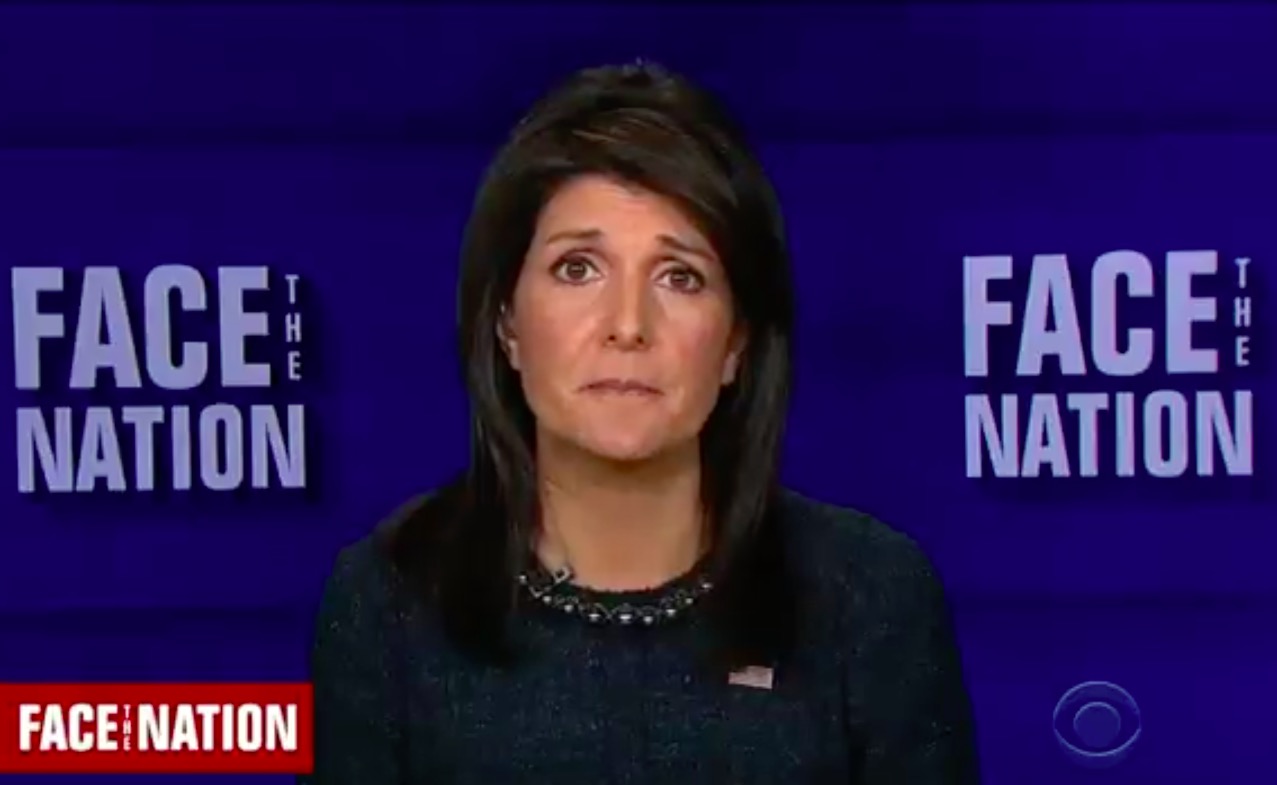 In a Sunday interview on Face the Nation, Nikki Haley responded to allegations of sexual assault and misconduct against President Trump. Haley, who currently serves as U.S. ambassador to the United Nations, first spoke about the recent resignations of Minnesota Sen. Al Franken and Reps. John Conyers and Trent Franks over allegations of sexual misconduct. But the conversation, in which Haley claimed to be “proud of the women who have come forward … of their strength … of their courage,” did not stop there.

Like Kellyanne Conway, Sarah Huckabee Sanders, and other prominent women of the Trump administration, Haley was naturally presented a question about the roughly 19 allegations of sexual misconduct against her boss, who was notoriously recorded on hot mic advocating that sexual assault and grabbing women “by the p-ssy” is OK “when you’re a star.”

UN Amb. @nikkihaley on cultural shift and what it means for the @POTUS accusers: Women who accuse anyone should be heard and dealt with pic.twitter.com/HLCUpfVNnO

And yet, noticeably missing from Haley’s commentary was confirmation that she believed the nearly two dozen women accusing Trump, or that she believed he should be held accountable, investigated, or punished. Instead, asked if the accusations against Trump were a “settled issue,” she replied: “That’s for the people to decide”—which is, in essence, the same cop-out we’ve been hearing from the Republican Party officials asked about Senate candidate and accused child molester Roy Moore.

And yet, the fact of the matter is that listening to women and encouraging them to speak up in order to misleadingly, self-servingly posture oneself as an ally is meaningless unless you actually demand accountability from men who abuse their power. Women can continue speaking up, as many have for decades and decades—but the harsh reality is that nothing will change until men in positions of power realize that going forward, there will be actual consequences to their actions. If powerful men across the country continue to watch other powerful men go unpunished for abusing women, the cycle will only continue.

It’s true that Haley’s defense of the women speaking against Trump may have been different from Conway and Sanders’ abject denials of allegations of Trump. Sanders, for her own part, attacked not only Trump’s accusers, but ultimately all women, when she argued that allegations against men should only be investigated if the men admit to their actions. It was a jarring blanket defense of all sexual predators and raised the question of why women should speak out at all if only powerful men will be believed.

But at its core, Haley’s encouragement of survivors of sexual abuse was really just words—a weak attempt to have it both ways. You can’t simultaneously serve President Trump—a man who opposes women’s right to bodily autonomy and access to basic reproductive health care, who has a long record of objectifying and attacking women’s appearances, and of course, who has been accused of creating hostile work environments for women and even committing sexual assault—and be a feminist ally.

In many ways, the feminist movement has become something of a powerhouse in which the support and empowerment of women by other women is a tremendous asset—EMILY’s List and other highly successful groups that work on behalf of other women are proof of this inspiring and deeply important phenomenon. There’s a lot to gain from supporting other women. But doling out a couple of surface-level positive quotes—think: Kellyanne bemoaning her experience of working her way up in a “men’s club,” or Ivanka Trump identifying as a champion for working women and girls while supporting her father’s decision to repeal gender wage equality measures instated by President Obama—isn’t the same thing as supporting women, and women who do so while defending a sexual predator and known misogynist don’t deserve recognition as allies.

By no means is speaking up for women meaningless, but it is if the words come from women who can gleefully overlook the detriments of this administration on American women just because it empowers them as individuals. Other women—in America and around the world, because of an executive order defunding global organizations that offer basic sexual health education and care signed by the president—could see their lives and health severely jeopardized as a result of policies supported by this administration. Giving a couple women high-level positions, or sending them out to be the ones to explain to other women why they’re about to lose their health care, isn’t feminism. It isn’t the advancement of women as a whole, but the advancement of a few individual women.

Just as Haley can’t be an advocate of women who speak against sexual misconduct and work for an alleged serial abuser, nor can she and other women in the Trump administration claim to be champions for women’s rights and empowerment while supporting an administration that’s already done so much harm to women. They are, at best, callous enablers, seizing on the rare opportunities for women in this country without regard for the condition of other women, and at worst, active players in an administration that is on every level an unmitigated disaster for women’s rights.