And her entire "career" needs to be put between quotes. 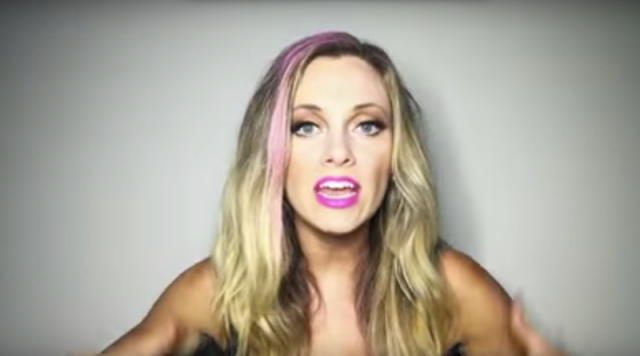 So, “comedian” Nicole Arbour, whom you might know from such platforms as YouTube or….Periscope, recently made a video called “Dear Fat People,” in which she, in an attempt to be “satirical” (I don’t think she knows what that word means), ended up offending fat people, compassionate people, basically anyone with a soul. Now, she’s dealing with the consequences of not only her insensitive actions, but her really shitty comedy.

I’m not going to link to the video, because I don’t feel like giving Arbour any more traffic than she deserves, but she basically spends several minutes giving fat people “tough love” (that they never asked for) by going on a rant about a fat family she met at the airport (which probably didn’t happen, and certainly not the way she describes) in an attempt to highlight the importance of…good health? *sigh* Her comments include:

They complain, and they smell like sausages, and I don’t even think they ate sausages, that’s just their aroma. They were so fat that they’re that ‘standing sweat’ fat. Crisco was coming out of their pores.

She also talks about how fat-shaming isn’t actually a thing, and that it’s something that fat people made up so they can stay as fat as they want. Uh-huh. Never mind that her entire video was one big fat-shame. Thankfully, however, she allows some people to be fat. But only if they have a legitimate medical condition (which she can apparently determine magically by just looking at someone). Gee, thanks for your permission in special cases, Nicole. It’s good to know that people are only deserving of not being ridiculed and being treated like human beings when you deem it so. Thanks for clearing that up. I was one of those crazy people who thought that people had a right to live their lives and not have to be shamed by the general public, you know, all the time. But what do I know? I’m not a brilliant, incisive comedian like you are. /sarcasm

Now, her “comedy prowess” seems to have lost her a job.

Pat Mills, director of an upcoming teen movie, Don’t Talk to Irene, spoke to Zap2It about having hired Arbour as a choreographer on the film (she used to work with the Toronto Argonauts Cheerleaders) only to come across Arbour’s “Dear Fat People” video and fire her. Mills says:

[I’m making] a dance movie, so obviously we needed a choreographer. We met with a woman who not only did traditional dance choreography, but was a cheerleader as well. She was fun and nice and had a lot of energy. [Arbour told me she] had a YouTube channel and identified as a ‘YouTuber.’ She seemed like a perfect fit for the project. I shared the script with her. She said she dug it and was excited to come on board.

I was supposed to get together with her this week for what she called a ‘choreo party’ to watch my favorite dance scenes and talk ideas. And then a crazy thing happened on Saturday — I saw something on the Internet that made me never want to see her again.

[Don’t Talk to Irene is] a body-positive teen dance movie set in a retirement home. It’s about a 16-year-old girl who dreams of being a cheerleader, but she is constantly bullied for being fat. She learns that she doesn’t have to change anything about herself to be awesome because she already is.

[‘Dear Fat People’] is an unfunny and cruel fat-shaming video that guises itself about being about ‘health’. It’s fat phobic and awful. It went on for over for six minutes. I felt like I had been punched in the gut. I was so upset I was shaking like Shelley DuVall in the ‘The Shining’.

I’m not currently, nor have I been attached to any feature films as of late. 😉 #gossip

She’s then done a bunch of press (as well as another stupid video) basically defending her right to be an asshole. The thing is, she has every right to be an asshole. What she shouldn’t have the right to do is to pass that off as “comedy.” Being an asshole is its own thing, and if she wants to be good at that, great. But too many comedians mistake assholery for comedy, and it’s just not cute. What’s more, it’s not even accurate.

Comedy as an art form has never been about being an asshole, or offensive, for its own sake. From its origins as an art form in Ancient Greece, comedy has been used as a tool for people without power to have recourse against people with power. People have always used comedy to talk about the ways in which they feel powerless. In other words, comedy is comedy when it “punches up” and is not comedy when it “punches down.” That’s why, while it might be funny to see the janitorial staff of a Fortune 500 company laughing about how much money their superiors have and what they must do with it, it’s much less funny to see Fortune 500 CEOs sitting around and laughing at their janitorial staff or about how broke they are by comparison. Comedy is designed to attack the powerful and give the marginalized a voice.

And even in the case of, say, relationship humor where a comedian will joke about all the sex they’re having, or the lack thereof, or inadequacies in their partner – it’s clear that the comedy is stemming from the insecurity the comedian feels themselves. So, even if they’re tearing down a boyfriend or girlfriend, or other relationships in their lives, it’s generally coming from their own inadequacies. They aren’t actually tearing down their loved ones, they’re examining themselves. When Louis CK talks shit about his daughters, it’s clear that he’s worried about what kind of father he is.

Which is why it bugs me when “comedians” like Arbour (or Amy Schumer, for that matter, even though I enjoy her) hide behind comedy to give them carte blanche to say whatever they want about whomever they want. That’s not how comedy works, and if you’re going to go into the business of comedy, you should know that.

If you’re in a position of privilege – ie: you’re white, or male, or cisgendered, or able-bodied, or heterosexual, or wealthy, or thin – you don’t get to attack members of a  group that you hold that privilege over. That is, by definition, not comedy. At least, not in the sense of the art form. Sure, plenty of people find the misfortunes of others hilarious, and the technical term for that is Being a Really Shitty Human Being.

So, Arbour is not a comedian, she’s just mean for a living, and the only people who find her schtick funny are those who already think it’s OK to laugh at fat people. So, basically douchebags. Enjoy making the douchebags laugh, Nicole. The rest of us are interested in actual comedy.