Amy Schumer: The Daily Show, The Bachelorette, and Why She Should Embrace Intersectionality in Her Feminism 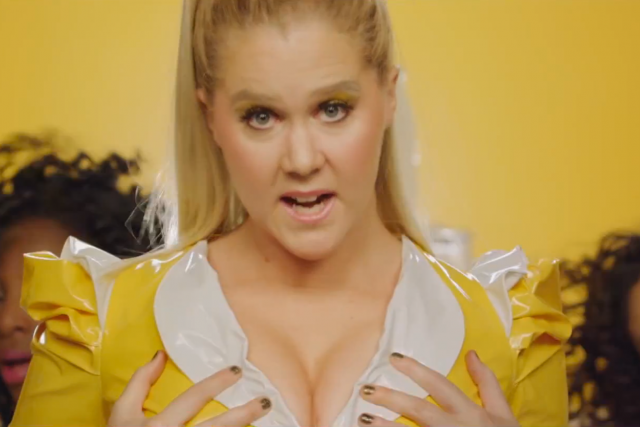 Full disclosure: I love me some Amy Schumer. I think she’s hilarious, and when she delivers her material through a feminist lens, it can be amazing. That said, it can also be problematic.

She’s been everywhere lately promoting her upcoming film, Trainwreck, in which she plays a woman who’s not into commitment, until she meets Bill Hader. It’s going to be awesome to see her in a feature film! Another place we might see her – The Bachelorette? Well, only if ABC meets certain requirements. According to E! Online, Schumer would be on The Bachelorette, which is a guilty-pleasure show for her, under these conditions:

1. Back up the Brinks truck: “Money,” Schumer says. A lot of money.”
2. Let’s get real: The reason Schumer, who is a “huge fan” of the show, doesn’t think she could ever truly be the Bachelorette is because she would be “very honest and I don’t think there’s room for that in the franchise.
“They would have to say, ‘We will let you be yourself,'” she adds. “I would say what was really up.”
3. No turds allowed: The biggest hurdle for ABC to land Schumer? “The casting process would have to be different,” the Inside Amy Schumer creator and star says, hilariously mocking the show’s “weird” job descriptions. “It’s like, ‘former investment banker’?! They’re like, ‘flower enthusiast’? You’re like, ‘But what do you do? How come you could leave your life?'” she says. “I love when it’s like, ‘I have five kids at home but I just came here to follow my heart.’ It’s like maybe go take care of your kids? I would keep it very real. And I don’t know if it’s good for that show.”

I’ve never in my life watched The Bachelorette, but you know what would make me tune in? Amy Schumer as the Bachelorette going on there to purposely tear shit up from the inside. However, according to The Daily Beast, one place we just missed having Schumer’s unique sensibility is on The Daily Show. That’s right, before Trevor Noah (who’s problematic in his own right), Schumer was approached to host the long-running news satire show. Apparently, she turned it down, because while it would be an amazing opportunity, she didn’t want to be locked into such a long-term gig:

I was so honored to be asked and considered. With Comedy Central, I project so much ‘You’re my parents!’ on the network and the people that run it, so them saying, ‘We believe in you and trust that you can do this,’ I thought, ‘Oh my god, thank you!’

And then I thought, ‘Well, I could give everyone I love a job and we could all be together for five years. But picturing being in a building and knowing what I was going to do for five years—I love not knowing. And I’ve never done anything safe or to make money for that reason. So, you know, I said, ‘I can’t start now.’

This is probably a good thing. Schumer would have been an interesting Daily Show host, but she’s better at playing characters – performing and writing sketch and playing comedic roles. In fact, a lot of her trouble comes in when she’s just being herself.

Trans issues aren’t the only area in which Schumer has been problematic. In her parody video, “Milk Milk Lemonade,” Schumer skewers all the booty videos out there. However, for many people, like Courtney Taylor at For Harriet, her use of black women’s bodies in the video reinforces the already problematic media images we see in which black women are basically props for white female performers.

I have to say that, for me, the problem isn’t necessarily with the Bailey Jay interview, nor is it with “Milk Milk Lemonade.” For the first, while there are problematic moments, Bailey Jay also had the opportunity to clarify a lot of misconceptions, which she did. To me, Schumer in these interview segments is interviewing the way Stephen Colbert did – half herself/half in character and saying the stupid thing so that the guest can correct her.

As for the second, I don’t think that Schumer was only parodying “booty songs.” She was specifically parodying videos like Meghan Trainor’s for “All About That Bass,” Taylor Swift’s for “Shake It Off,” and Lily Allen’s “Hard Out Here.” Part of the parody seemed to be the fact that there are actual, real-life white female musicians appropriating black culture in music videos, and Schumer’s video disapproves of that in addition to disapproval of women being reduced to their posteriors. It’s a parody, and a take-down, of all those things.

So, yeah, I generally find Schumer’s work less problematic than most. However the thing I do have a problem with is with Schumer’s response. Yesterday, she took to Twitter to address the race issue:

Put down your torches before reading this so you don’t catch on fire. pic.twitter.com/JyRQGvFuX8

This argument that people have to learn how to “take a joke,” this automatic defensiveness by performers whenever anyone criticizes the problematic elements of their work – it has to stop. It’s not just comedians, but anyone with any kind of a platform. It would have been nice if Schumer would’ve taken the criticism as an opportunity to delve into her work a little more deeply (since she likes “going deep”) and used the moment to enter a dialogue with her fans. Instead, she seems to misunderstand what people are upset about, or perhaps doesn’t care as long as there are those who laugh, and gets immediately defensive and says she’s gonna keep on doing what she wants to do. Now, I’m all for bravery in art, and for risk-taking – but those risks should never come at the expense of people, and her stance is particularly frustrating, because there’s so much about which she seems to give genuine, feminist thought. So, I know she’s capable of it. I just want her to apply those skills more often, and treat criticism like an opportunity, rather than an obstacle to be overcome.

Schumer’s hugely talented and really funny. I hope she recognizes that by embracing intersectionality in her feminism, her work can only get better. Amy, you’re good – you can be better. And your feminist comedy should not come at the expense of your trans sisters, or your sisters of color.