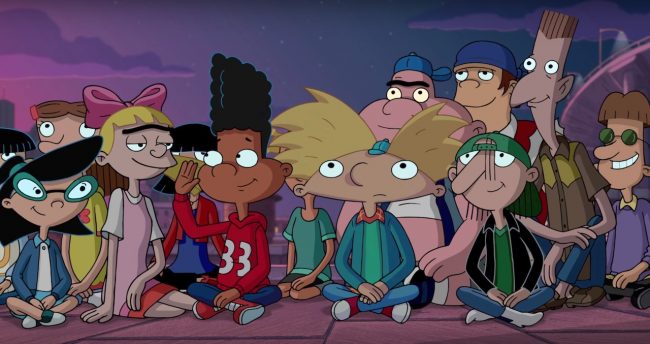 Real talk: it makes me kind of sick (in the best way!) to see how much nostalgia they poured into the new trailer for Hey Arnold: The Jungle Movie, Nickelodeon’s made-for-TV film that’s supposed to send off football head in (emotional, pining, wistful) style. I mean, look. It’s actually just a big sneak peek at the film, the central conceit of which revolves around Arnold winning a trip to San Lorenzo, where he finds out the truth about what happened to his parents. The trailer itself is a look at the video the neighborhood kids made about Arnold, talking up his incredible character and his really kind nature.

It’s a super, super clever look at some of Arnold’s best moments. Rather than just show them straight up like a “Hey, remember this, fellow kids?” kind of thing, they actually present it as if someone was filming those events from a different angle. The shot from the window of karate-Arnold standing off against those bullies is especially novel, and so is the one with Arnold, Harold, Harold’s kitty, and the cops standing in front of the boarding home where Arnold lives.

All of the moments in the trailer are tied to a specific episode in the show’s history, and they’re very cleverly presented here.

But what got to me the most was the short interview with Pigeon Man, who featured in one of the series’ most touching and poignant episodes. For those unaware: Pigeon Man, much like Stoop Kid, refused to leave his rooftop abode, saying he prefers the company of pigeons over other humans. Arnold convinces him to come see the city, which has changed significantly since his self-exile. While away, some of the school bullies come up to the Pigeon Man’s home and attempt to pull a prank, but accidentally end up ruining everything up there instead. Arnold is left appalled by what happens, and the Pigeon Man just sort of loses much of his faith in humanity. He actually ends up tying himself to a bunch of pigeons, who fly him off into the sunset.

In fact, this ending proved to be a bit of a hotbed for fan theories and rumors, which argue that Pigeon Man actually killed himself (or was supposed to kill himself, until studio execs disagreed), and Arnold kind of revised the memory there because it was so traumatic. Yeah, freakin’ dark, right?

Series creator Craig Bartlett refuted any and all such rumors as they popped up, and he hopes to put them all to a final rest as he pointedly put Pigeon Man in this sneak peek. Here, he’s shown alive and well in front of the Notre-Dame in Paris. “Arnold helped me escape the cage of my old rooftop habitat,” he says. “Now, I’m as free as a bird. Merci, Arnold.” Like. Damn.

Okay, just. We make a lot of jokes about nostalgia and how everything these days is kind of just cashing in on that trend. But I have to say that in a world full of Ready Player Ones and other “Hello, fellow Millennials” franchises, this might actually buck the trend and give an earnest look at a show that certainly made an impact on many lives, both within and without its own universe.

I’ll say this, though: I fully expected Mr. Hyunh to make an appearance in the film. Mr. Hyunh is an immigrant from Vietnam, and in the episode, “Arnold’s Christmas,” Arnold learns that Mr. Hyunh has an estranged daughter. He and Mai, his daughter, were trying to escape from war-torn Vietnam, but the helicopter filled up before they could get there. Mr. Hyunh handed Mai, an infant at the time, over to the U.S. soldier who was watching the door of the helicopter. He told Mr. Hyunh where to find her when he got to America, but Mr. Hyunh couldn’t hear him over the rotors.

Arnold spends nearly the entire episode trying to find her, and ultimately fails as a bureaucratic adoption agency guy staunchly refuses to work on the case for him. Helga actually comes to the rescue (secretly!) and convinces the guy to make the connection. It ends with Mr. Hyunh reuniting with Mai in another one of the series’ most touching scenes.

True, Arnold wasn’t directly responsible for her showing up, and true, it was part of a secret Santa exchange, so he might not have known, but still, I think such a powerful, compelling moment could have certainly found a place in this scene.

But who knows, we’ve still got a whole lot of movie ahead of us, and there’s still a lot to see. I just fully expect the tour will pay some solid nods to some of the show’s more heartfelt moments. And given the look of this trailer, I also think those expectations will be well paid off in the end.