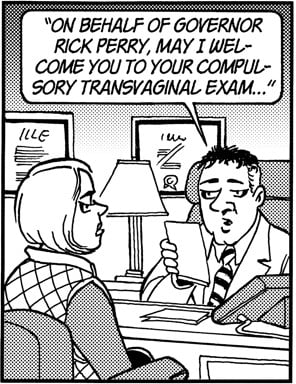 In a move that is not exactly the most surprising of moves, several newspapers have pulled the syndicated comic Doonesbury from its funny pages for the next week because its creator, Gary Trudeau, will be tackling the issue of yet another state law (this time in Texas) requiring women to undergo a transvaginal ultrasound before getting an abortion. While some papers will run old Doonesbury strips during the duration of the story, one paper has agreed to run the new strip online while running reprints in the actual newspaper. They cited “different audience expectations” for print vs. online. Uh huh.

Trudeau, whose strip undeniably slants to the left of the political spectrum, wasn’t exactly surprised by this move, either. In fact, he completely expected it to happen, and would have been surprised if it hadn’t. The Standard-Examiner, the paper running the new strip online and reprints in the paper, had this comment from Trudeau:

“Abortion remains a deeply contentious subject. Having said that, the goal is definitely not to antagonize editors and get booted from papers,” he said in an email to The Associated Press. “It’s just an occupational risk.”

However, while this is not unexpected, it’s also not making huge waves in the print newspaper world. Lee Salem, president of Universal UClick, says that 1,400 newspapers run Doonesbury, but only about 20 to 30 papers will pull this week’s upcoming strip. Maybe slightly bigger than a “drop in the bucket,” but not so incredibly controversial that it’s a cause for outrage.

According to Bleeding Cool, the strip will lampoon the Texas anti-choice law every day next week and will follow a woman who is trying to procure an abortion, receiving guidance from a Republican lawmaker. At some point, the woman is asked to sit in the “shaming room” and, as can be seen in the panel above, welcomed on behalf of Texas Governor (and former presidential candidate) Rick Perry. Hey, they got themselves involved, and now they might as well be in the shaming room with us.

What’s a little stranger about this particular ultrasound law — which, unlike the other bills, has actually already been passed — is that somehow, it completely flew under the radar. Probably because it was introduced and passed in one of our country’s “reddest” states, Texas. While the Texas legislature does have Democratic lawmakers, it’s led by conservative Republicans and has a solidly conservative Republican governor to support it. Without question. And Texas’ law is actually even stricter than the one we recently saw in Virginia:

Women must have a sonogram at least 24 hours before an abortion, and the doctor must play the heartbeat aloud, describe the fetus and show the woman the image, unless she chooses not to view it.

The Texas bill does not specify whether the ultrasound is abdominal or vaginal. However, in order to hear the a heartbeat in the very early stages of pregnancy, only a vaginal ultrasound will be effective. So, guess what kind of ultrasound these women will be subjected to? (Alabama’s bill, on the other hand, goes right ahead and specifies a “vaginal” ultrasound. They really, really, want to make sure women are clear that their state government is requiring that they undergo an invasive procedure. How honest of them!)

So, while Trudeau could have tackled the ultrasound issue with any of the states that have been in the news recently — Virginia, Alabama, or Pennsylvania — he would have had to imagine this situation had the bills passed and become law. And then people could say, “That’s terrible! But at least it’s not the law!” Well, it’s the law in Texas. No one has to imagine anything. It’s reality, and some newspapers don’t want people to see it. And that’s terrible.