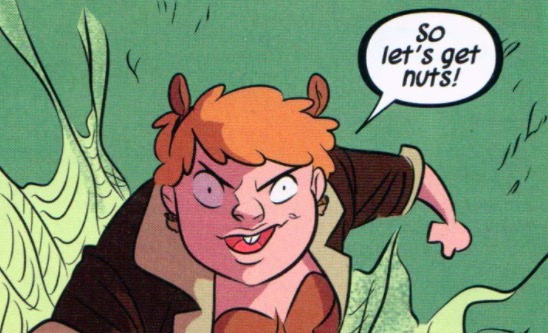 There’s bad news and good news, Squirrel Girl/New Warriors fans. Marvel’s New Warriors TV show, which had previously received a 10-episode order from Freeform (the Disney-owned former “ABC Family”), is suddenly without a home now that the network has decided it doesn’t fit into their schedule. The good news is that Marvel is far from giving up on it, now reportedly looking for a home that will agree to two seasons.

While the half-hour comedy that promises to finally bring Squirrel Girl to the screen (played by Milana Vayntrub) is currently in limbo, Freeform at least agreed to let Marvel shop it elsewhere in order to get it on the air in 2018, according to the Hollywood Reporter, so hopefully there won’t be much of a delay. In further encouraging news, THR added that the show’s pilot tested “through the roof,” making high-level Disney execs invested in its success.

There’s a chance it could even launch on Disney’s forthcoming streaming platform, although that’s considered unlikely. It’s probably better if that’s not the case, though, not just because we’d all have to add another streaming service just to watch (which, let’s be honest, Disney will probably manage to compel us to do anyway), but because that service isn’t expected to launch until late 2019. We won’t have to suffer through that long a wait if Marvel Entertainment president Dan Buckley has his way.

Along with Vayntrub as Squirrel Girl, New Warriors is packing Derek Theler as Mister Immortal, Jeremy Tardy as Night Thrasher, Calum Worthy as Speedball, Matthew Moy as Microbe, and Kate Comer as Debrii. We’re all very much looking forward to a change of pace like this from Marvel, so we’ll be eagerly looking to see which network lands the show.