New Star Wars Attractions Coming To Disney Theme Parks, Will Be Based On The New Movies

But I wanna blow up a DEATH STAR! 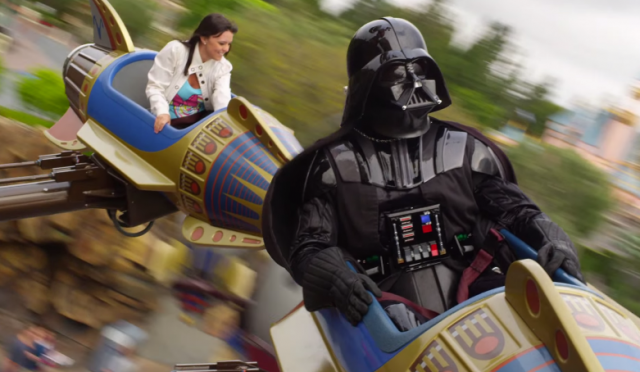 If your first thought upon seeing the Star Wars: The Force Awakens trailer was “whatever that weirdo circular droid is, I wanna ride it,” then your dreams might soon come true. Yesterday, Walt Disney Co-Chief Bob Iger announced that the company is looking to expand its theme parks to include new Star Wars-based rides and attractions—but only ones which are based on the upcoming films.

At Variety‘s Dealmakers Breakfast on Wednesday morning, Iger said the two-year delay in bringing Star Wars to the Disney parks since buying the franchise came from a concern that the audience for new films would be disappointed if they went on a ride which only depicted material from the  already-existing Star Wars trilogy and prequels. Currently, there are Star Wars attractions at the parks as well as annual Star Wars Weekends at Hollywood Studios.

“I didn’t want someone to say, ‘I just saw the movie and there’s nothing in that movie in this (attraction),” Iger said. “We waited to see what this film would have in it.” (Because everyone knows that Star Wars fans will not be satisfied with what is already familiar to them and always embrace a new element of the franchise they know and love without hesitation.) Instead, “what we come forward with will have a blend of the past, present and maybe the future,” referring to the eventual sequels and spin-offs that are also in the works.

But Iger also told those present at the breakfast that Disney is well aware of their new franchise’s history with hyping people up for new films and then massively disappointing them, and that this has definitely influenced the way they’ve approached these new movies.

“I keep telling J.J. Abrams this is a $4 billion movie,” Iger said, referring to the amount of money Lucasfilm eventually sold for. “We need to treat this very special. It’s an unbelievable privilege and unbelievable responsibility to take a jewel and treat it in a way that is respectful of its past but brings it into the future.” He also stressed the new films’ commitment to “the look George (Lucas) created in the ’70s” through the use of physical sets and practical effects over CGI.

The first look at the new Star Wars attractions is expected sometime next year, most likely before The Force Awakens premieres in December 2015. Let’s hope it’s not a pod-racer situation where the cool new machines and gadgets are better than the movies themselves.

(via JoBlo and Polygon, image via Disney Parks)