Who's a widdle carnivorous South American mammal species? You are! Yes you are! 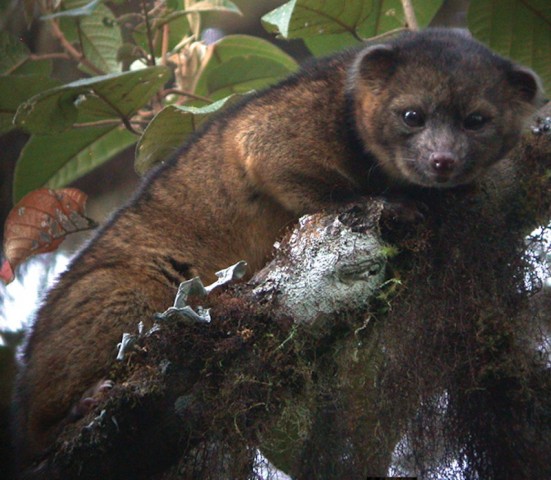 New species of insects, amphibians, or fish are to the natural world like what Starbucks are to major urban areas — all you have to do is start walking in any direction and you will eventually find one. New mammal species are trickier to find, but recent research published in ZooKeys takes note of a newly discovered critter — the olinguito.

Formally called Bassaricyon neblina, the olinguito is a carnivorous relative to the raccoon that’s been eluding the scientific community for ages. These tree-dwelling guys live in Ecuador and Colombia and tend to be most active at night when fog is especially dense, so they’ve been tricky to pin down and study, despite the fact that specimens existed in museum collections, but had been mislabelled. That’s because olinguitos look remarkably like another carnivorous species, the olingo, which definitely confused a couple of zoo-owners who it seems had access to a captive olinguito in the 1960s (apparently they just thought he was a weird looking olingo who refused to breed).

The distinction between olingos and olinguitos was first noticed by Kristofer Helgen, curator of Mammals at the Smithsonian National Museum of Natural History. In his efforts to describe the known species of olingos, he came across preserved samples of specimens unlike anything he’d seen before, and took a team to Ecuador’s Otonga Reserve in the Andes to figure out what these unusual creatures might be like. And oh my gosh, what they found is the cutest most furriest little dude and I just want to pet him and love him and hug him and name him George.

But seriously: while it’s unlikely that any of us will encounter an olinguito in the wild, I should point out that actually attempting to pet them would probably be a mistake, even if they are super adorable, which they clearly are. You know, what with them being carnivorous and wild animals and all. Just putting that out there.