The New MacBook Pro’s RAM is Soldered Onto the Motherboard, Cannot be Upgraded 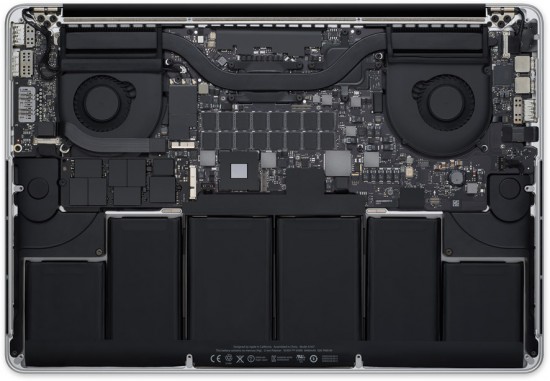 Unfortunately, like the MacBook Air, the new MacBook Pro line that Apple announced Monday at WWDC 2012 that has everyone abuzz contains RAM that is soldered onto the motherboard, and thus cannot be replaced or upgraded.

This might better explain the 16 GB RAM configuration that everyone’s been so keen to bring up when discussing the new line of Pros. Though we are barreling through time each passing second and computer specs seem to climb higher at a perpetually increasing speed, 16 GB of RAM, especially in a laptop, still seems pretty unnecessary, as half that amount of RAM is still quite a bit and more than enough to handle, for example, modern day high-end gaming. However, since we cannot modify the RAM on our own, it would seem that purchasing the 16 GB RAM model would make more sense if you’re trying to get the longest amount of life possible out of your brand new MacBook Pro, considering you cannot pop the bottom off and throw in some better sticks of RAM when they’re cheaper in a few years from now.

Though this might frustrate would-be purchasers of the new line of Pros, remember, this isn’t exactly foreign territory for Apple products. Sure, the RAM was always the one thing Apple was fine with their customers easily replacing, but think about their line of mobile devices: iPhones and iPods don’t allow us to change the battery, or even provide a slot for an SD card. With the last line of MacBooks (that the Air replaced), Apple required us to pop the entire bottom off in order to even access the battery, whereas the old PowerBook G4 line had a simple battery release that, when turned, would pop the battery out.

It’s been pretty clear for quite some time that Apple hasn’t wanted much to do with third party hardware or storage media being shoved into their units, and the soldered RAM making its way to the Pro line only solidifies that stance. If you want to future-proof your new MacBook Pro as much as possible, it seems like you should probably shell out the extra cash for the maximum amount of RAM.