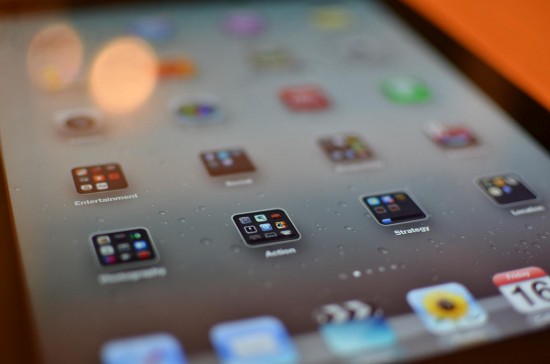 Since the launch of the new iPad last Friday, some owners have begun voicing concerns over how warm Apple’s new tablet device seems to run — some saying that their device spits out a warning message and shuts down due to heat. Apple has remained mum, saying that some components in the ultra thin device do get warm during extended use, but have generally downplayed the issue. However, a new report confirms consumer’s feelings: When running full tilt and plugged into a wall socket, the new iPad can reach 116ºF — 13º warmer than its predecessor.

The findings come from famed consumer watchdog Consumer Reports, which ran an iPad 2 next to the new iPad under a thermal camera. To push the devices to peak performance, the testers ran the graphically intense Infinity Blade II for 45 minutes. During this test, the iPads were propped up with their Smart Covers in a 75ºF room.

While unplugged, Consumer Reports found that the new iPad hit 113ºF, and when plugged into its AC adapter it reached 116ºF. While pretty warm, this is only 13º and 12º warmer than the iPad 2, respectively. The testers also note that while the device was definitely warm, it never seemed uncomfortable.

The question as to why the new iPad seems to be a bit toastier than its predecessors has been a topic of open discussion for some time. Most pin the blame on the device’s new A5X chip with its quad-core graphics capability. However, CNet spoke with the president of DisplayMate Raymond Soneira who believes that the issue lies in the much celebrated high-resolution screen in the new iPad.

According to Soneira, the new iPad has twice the LEDs of the iPad 2 in order to deliver the same peak brightness as the older tablet. The issue, it seems, is the pixel-packed Retina Display pioneered in the iPhone 4 and a similar high performance screen used in the new iPad. From CNet:

More pixels and transistors take up more space, meaning less opportunity for light to pass. “So they basically have to blast light through the LCD to make it come out.” Soneira adds: “I measured the LED power at maximum brightness–it’s two and a half times greater than on the iPad 2.”

To recap: because the screen is so dense, Apple needed to put 2.5x the brightness behind the screen to make it as bright as the older model. More LEDs mean more warmth, and also greater power draw on the battery which, coupled with the power demands from new A5X chip, is almost certainly contributing some heat.

Like Consumer Reports, CNet quotes Soneira as saying that the device does indeed get warm, but never uncomfortably so.

So why all the fuss? For some people, their new iPads are actually shutting off from the heat — and that’s a real problem. It’s worth noting that Apple doesn’t recommend using an iPad in temperatures above 95º. Also, because the new iPad is indeed hotter than the iPad 2, it’s posible that the device does not take as well to being confined to a poorly ventilated, but stylish, case.

For users whose iPads are just feeling hotter than they’d expect, part of the issue likely has to do with buyer’s remorse. For most people, an iPad is a fairly significant investment and the slightest hint that there is something wrong with their expensive new toy likely makes consumers weak at the knees. Nobody likes to feel that they were sold a lemon.

Moreover, the new iPad hit a sales record for its first weekend out the gate — a whopping three million units. That’s a lot of iPads, and there’s probably a lot of iPads going to people who have never owned an iPad or similar piece of high-end consumer electronics before. Those of us who have been using Apple products for years know that great design and high performance comes with a few temperature related strings — I’ve warmed my toes over the clamshell iBook hockey-puck AC adapter, I’ve had my thighs toasted by aluminum PowerBooks. For some new owners, this may be a new and distressing experience.

Lastly, the launch of a highly anticipated “hot” (har har) product being followed by consumer concerns is a storyline that we all know, especially those who make a living writing about hotly anticipated consumer products. See: the iPhone 4s battery issues, iPhone 4 “antennagate” and numerous other examples. That’s not to say these are invalid concerns, but that the news cycle is watching out for them. Apple’s trademark reticence on the issue is also not helping matters.

The takeaway from all this testing seems to be that your iPad is fine; warm, but fine. It’s worth noting that Apple doesn’t recommend using an iPad in temperatures above 95º. Also, because the new iPad is indeed hotter than the iPad 2, it’s posible that the device does not take as well to being confined to a poorly ventilated, but stylish, case.

However, if reports of new iPads becoming so hot they shut themselves off increase, then Apple as well as consumers might have a much larger issue on their hands. Fortunately, those seem to be remaining few and far between. For now.