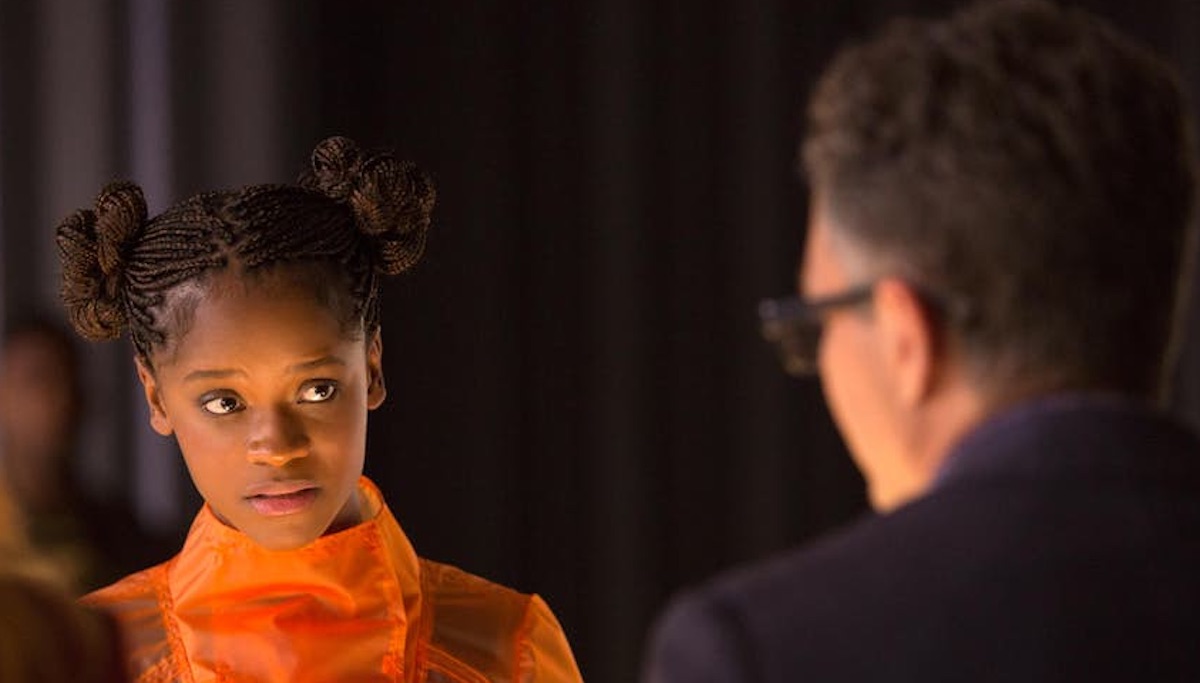 Maybe you, like me, have been feeling as though Marvel’s skimped on its Infinity War reveals, considering the movie’s out in April. Well, it appears the marketing sprint has finally begun, kicking off with a flood of new pictures to accompany Entertainment Weekly’s 15-cover double-issue spread. Yes, 15 covers.

Our cup runneth over after so many days of drought. Let’s dive right in, starting with the new stills from the movie: 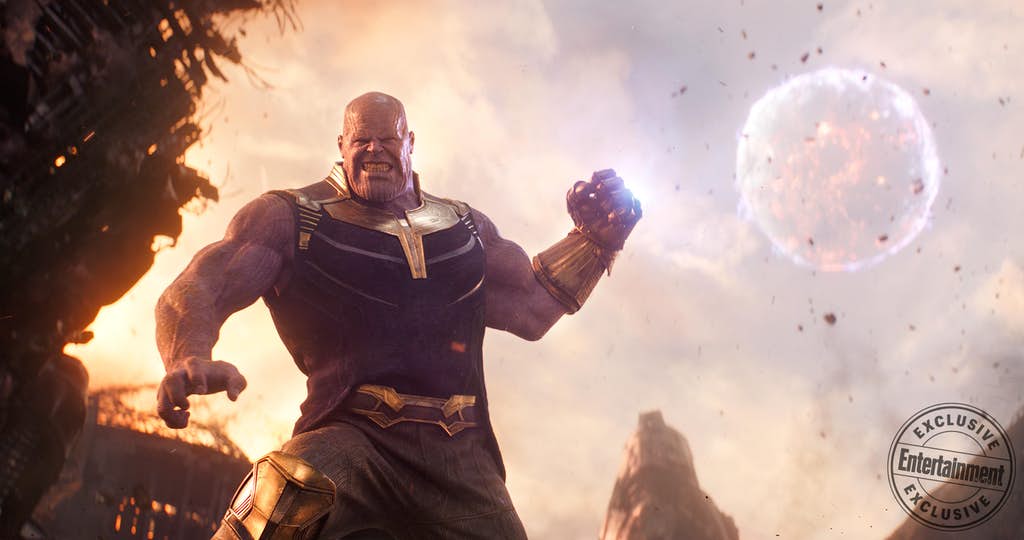 I hate you because you’re likely in the process of hurting someone that I love. Go back to Saturn, no one likes you. Not even Death. 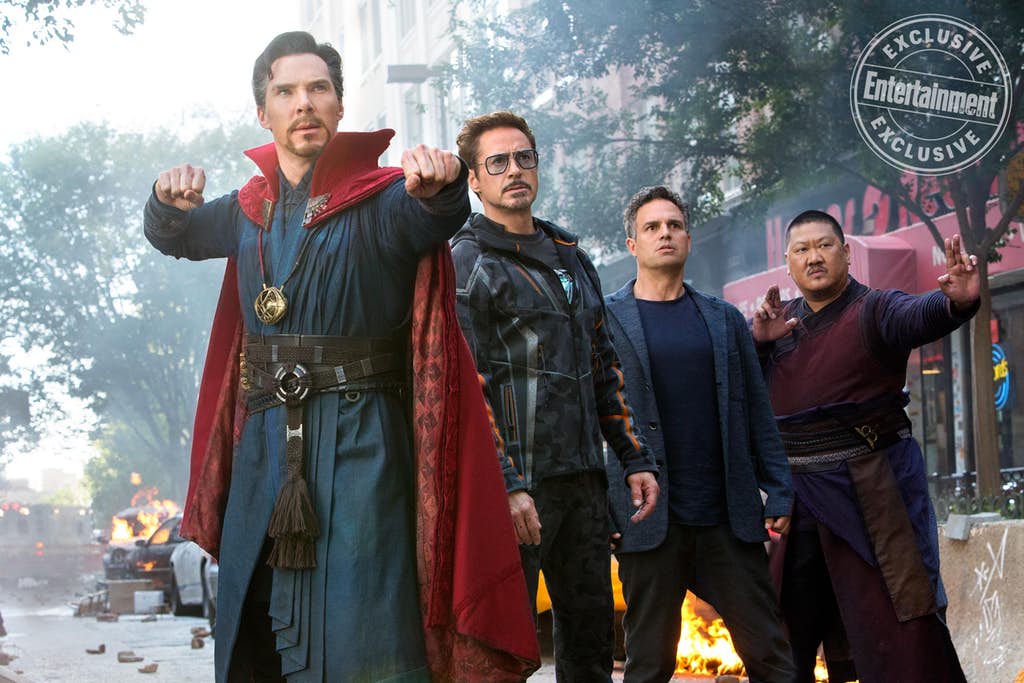 Whose clothes do we think Bruce Banner is wearing now? It doesn’t seem like Tony’s this go-round, because Tony Stark is dressed like he’s just hoverboarded in from the future. (Considering Bruce crash-lands naked in the Sanctum Sanctorum, is this Doctor Strange’s weekend attire? Does he moonlight in teaching a creative writing class?) Anyway, things sure do look bleak in the West Village, but most pressing: what’s gonna happen when the Science Bros. meet the Magic Bros.? This feels like it has the potential to be awkward. 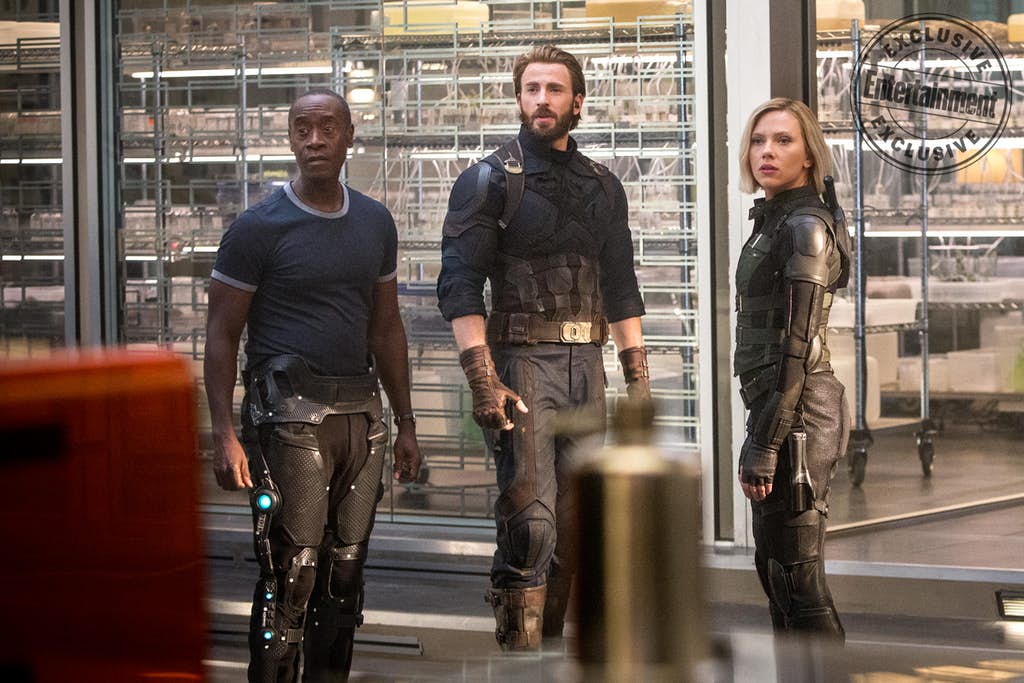 What are we looking at? At least it doesn’t seem to be looks of terror? And Steve and Nat seem like they’re back on better terms with Rhodey, who looks like he’s wearing some Stark-made braces to help with his mobility after the fall in Civil War. Where are these three? A lab? A server room? It reminds me of the cheese-making factory down the street, but that’s probably not helpful. 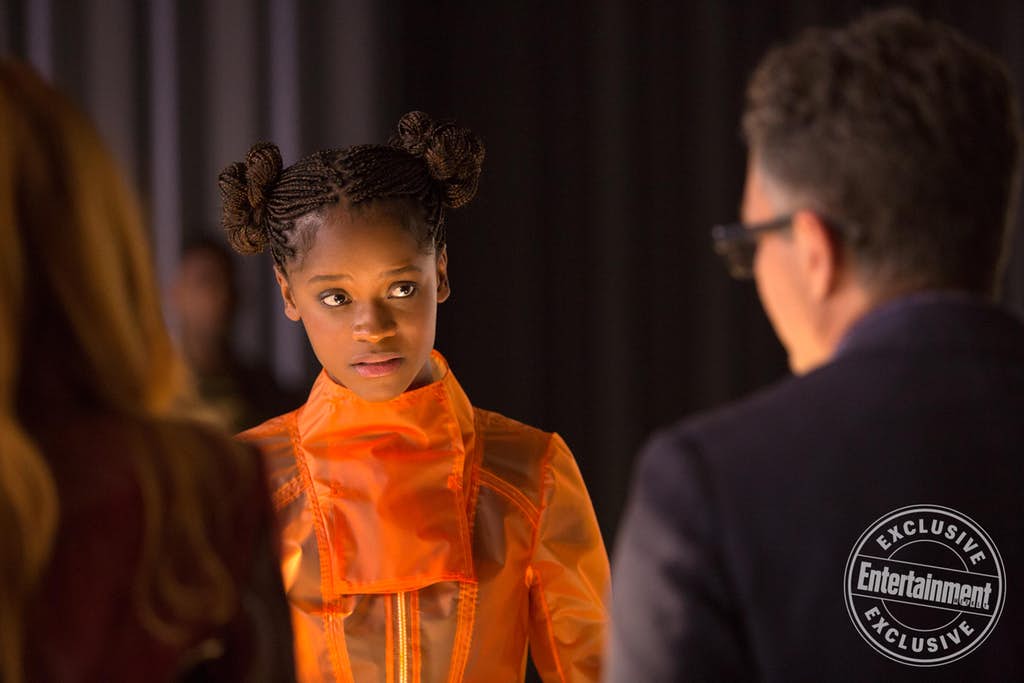 Our girl Shuri is styling in what looks like some futuristic Wakandan-designed threads, likely schooling Dr. Banner (and Wanda?) on a finer point of science. If I were a betting person, I’d say that based on what we know this scene has something to do with Shuri attempting to remove the Mind Stone from Vision’s forehead without destroying him. 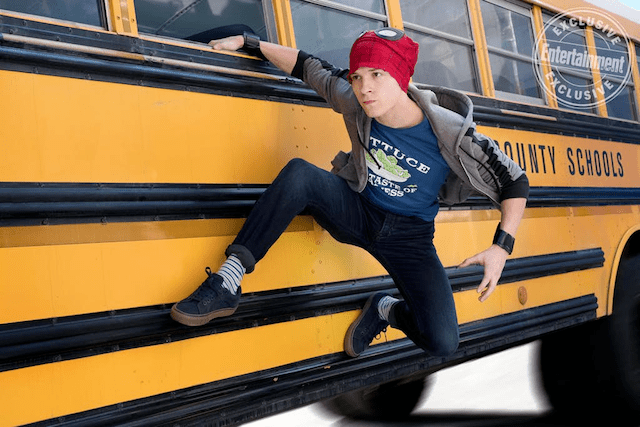 I don’t even have anything snarky to say about Peter, this is the most Peter Parker-y picture I have ever laid my own two eyes upon and it is perfect. 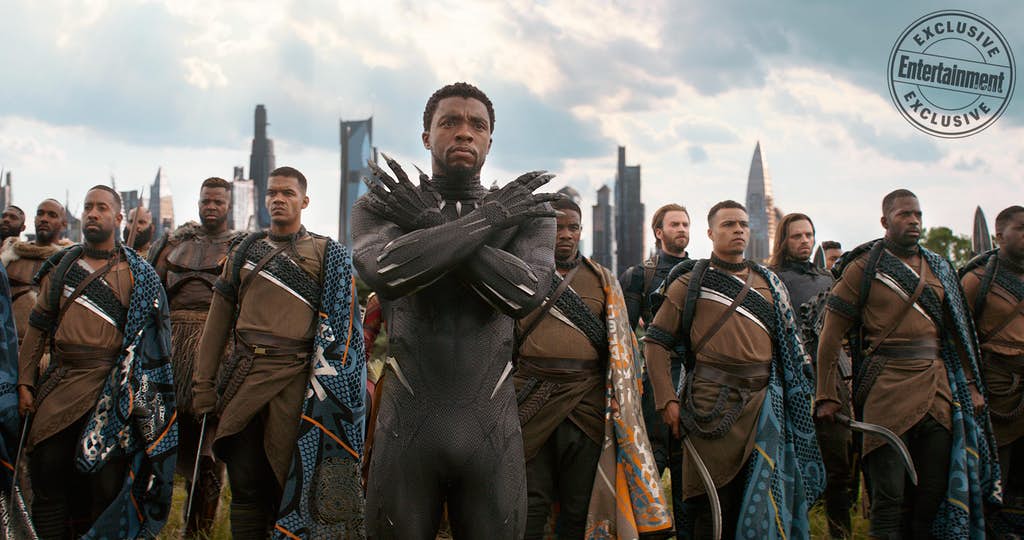 We’ve seen this scene in the trailer before, but let’s appreciate a couple of things once we’ve bowed before the King: the glorious M’Baku on T’Challa’s left ready to fight, and Steve and Bucky hanging out side by side like it’s old times. 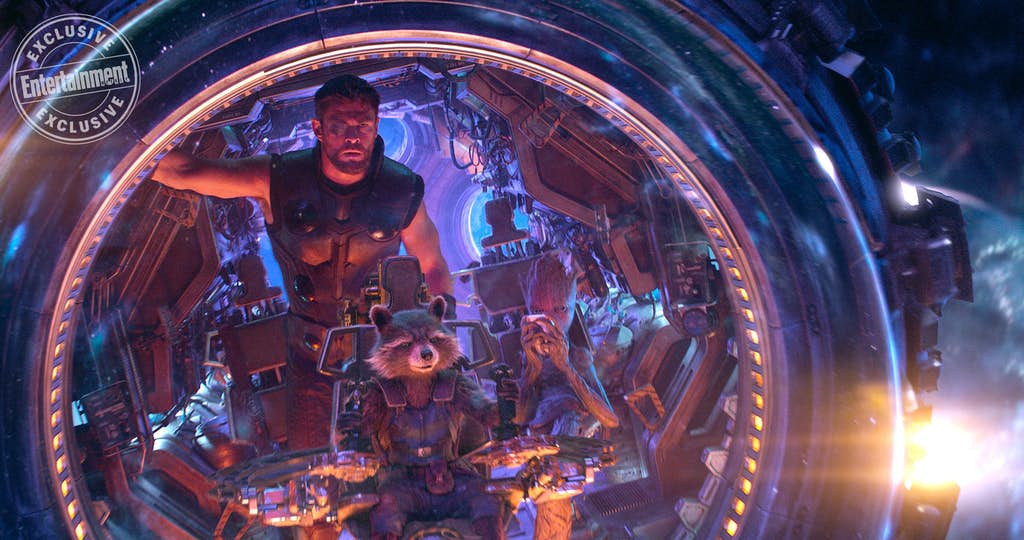 We’ve also seen this scene go by in trailers, but we should appreciate the gorgeous composition here of an unlikely trio in space. It appears that Thor, Groot, and Rocket will be spending a good chunk of this movie off on a mission of their own. Teenage Groot is in fine teenage form, appearing to ignore everything else around him in favor of staring at a tiny screen. 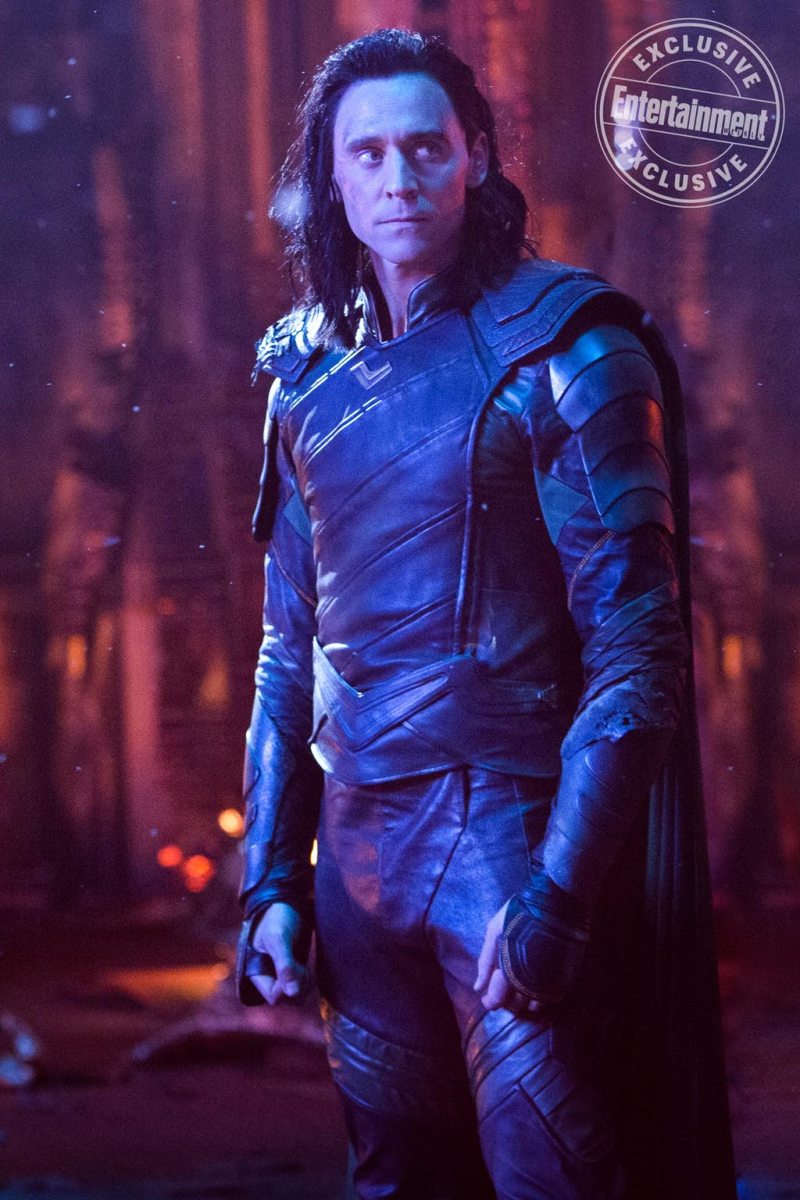 Oh, Loki, Loki, Loki. We’ve now seen Loki three times and every time he’s in the same scene—somewhere very much on fire—looking either a) sad b) mad c) squirrely d) back-to-his-old-tricks. How you feel about Loki will likely influence how you interpret his facial expressions here, but since he’s in his Ragnarok costume, I’m going to assume this happens relatively early in the film. Odds continue to remain not great for the Asgardians.

With these new sights in mind, let’s check out the truly mind-boggling amount of covers EW has produced in anticipation of Infinity War. According to the cover, the magazine contains a 40-page guide to the movie, so you better believe I’m going to get my hands on it. Stay tuned! In the meantime, you can check out each individual cover over on EW for a closer look. 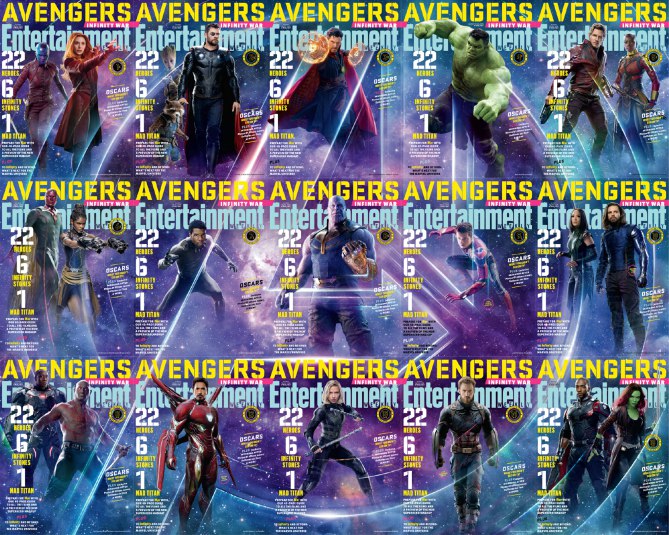 See what I mean about a lot of covers? Most intriguing cover-wise for me (other than that sweet look at Iron Man’s new armor, which has “wings” and also “rocket boosters” that can propel him into deep space) is some of the pairings here—it’s unclear if EW put these together through some sort of logic or else were told to by Marvel.

For example, Scarlet Witch and Nebula are on a cover, according to the caption, as “both are sisters who were shaped by powerful experiences with a beloved (or maybe not-so-beloved) sibling, and both found redemption after aligning with darker forces.” Fair! But then of Star-Lord and Okoye, “What could Chris Pratt’s galactic smart-ass and Danai Gurira’s no-nonsense Wakandan security chief have in common. Um … music?” So there was … no rhyme or reason to these pairings? Or Star-Lord and Okoye may really find time to jam? I’m confused. 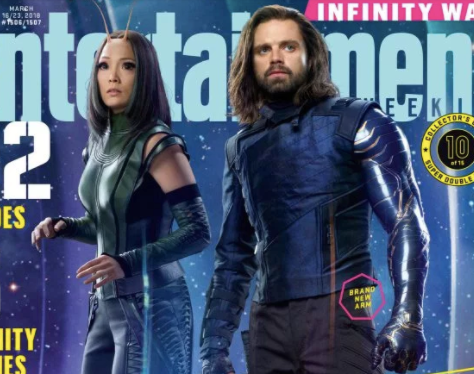 This description deepens the caption-mystery, however: “Sebastian Stan’s rehabilitated assassin now goes by White Wolf. It’s intriguing to see a man whose memories were scrambled, wiped, and rebuilt paired with Pom Klementieff’s alien mind-reader.” Some outlets have been saying that the caption means that Bucky is definitely going to be called White Wolf now instead of Winter Soldier, but I’m not so sure—maybe that’s just the caption-writer’s extrapolation from Black Panther? I have questions, and I’ll report back if the magazine itself can provide further answers.

This is also our closest look at Bucky’s new Wakandan-designed arm, and it’s … beautiful? You did good, Shuri. You did good.

What did you spot here that you haven’t seen before?