J.K. Rowling Gets Back to Prose By Delivering 3 New Harry Potter E-Books 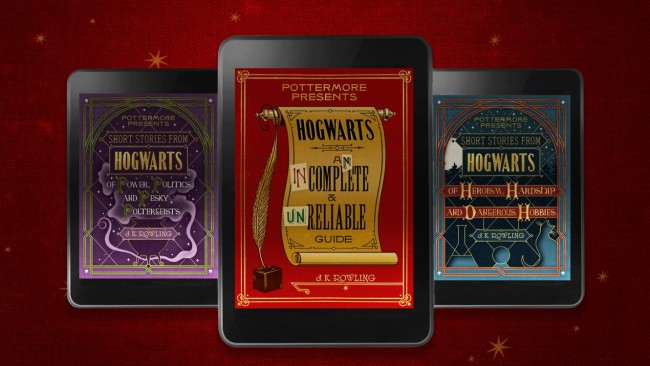 OK, so despite breaking sales records, reviews of the printed script of Harry Potter and the Cursed Child have ranged from mixed to downright infuriated. A large part of this has to do with the fact that, when purchasing a Harry Potter book, Potterheads expect, well, a book. They expect prose, and they just aren’t going to get the same level of enjoyment from a play script. Plays are meant to be seen. To offer fans more of what they’re used to, author J.K. Rowling is releasing new Harry Potter e-books!

As reported by The Daily Dot, Rowling announced that she will be releasing a series of short e-books called Pottermore Presents, each of which will delve more deeply into Harry Potter’s wizarding world. However, unlike other similar books like Fantastic Beasts and Quidditch for the Ages, these books will only be available as e-books.

According to the Pottermore announcement, “Pottermore Presents is a series of bite-sized eBooks that dig deep into the Harry Potter stories, with titbits taken from Pottermore’s archives and original writing from J.K. Rowling. The series offers Harry Potter fans added insights into the stories, settings and characters and were all lovingly curated by Pottermore.” The lovely covers were designed by Miraphora Mina and Eduardo Lima, otherwise known as the design team MinaLima, whose work might seem familiar to you from the Harry Potter films.

While there will be new writing in these books, much of it will come from material previously released on Pottermore. However, while much of it will be familiar to fans active on Pottermore, it seems that these e-books are geared toward Harry Potter fans who may not have gotten as into Pottermore as was hoped. (Fans like me who, when taking the Pottermore Sorting Hat quiz got Griffindor even though I know in my heart of hearts that I’m Hufflepuff, and so was all Eff you, Pottermore! Ahem.) As reported by The Bookseller, a spokesperson for Pottermore explained, “We also recognize that not all Harry Potter fans who want to read more about the wizarding world visit pottermore.com so we’ve developed Pottermore Presents to to reach those fans through other channels.”

If the series continues, even fans not on Pottermore will possibly be able to debate the problematic cultural elements of the new Pottermore material, which I have to say is a smart move. More platforms are always better than fewer platforms.