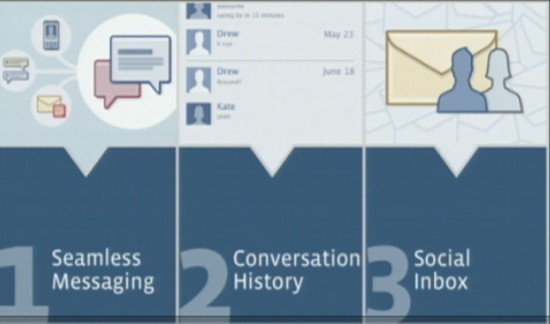 This afternoon, Mark Zuckerberg and company unveiled Facebook’s new messaging service, which isn’t quite an “email service“, as Zuckerberg took pains to mention, even though it has email-like features; rather, it’s a sort of blend of email, instant messaging, and SMS. In some respects, it’s a little like a toned-down Google Wave that could actually catch on, since it’s built upon Facebook’s social graph and is designed with casual users rather than engineers in mind.

The new Facebook messaging is evolutionary rather than revolutionary, and for that reason it’s already drawn some early smirks from early adopters. It’s not something that anyone would build a new startup around, but as an upgrade to an existing social network with over 500 million users, it’s a promising step forward.

As you can see from the above graphic, there are three components here, “Seamless Messaging,” “Conversation History,” and “Social Inbox.”

Of the three, Seamless Messaging is the most significant. For one thing, it means that everyone who wants one is getting an @facebook.com email address. (These will be assigned per your Facebook username; if your Facebook page’s URL is http://facebook.com/_______, your email address will be [email protected]) As our Twitter follower Anti Glib quipped, “It’s just like an Oprah taping!”

That Facebook email address is necessary because “Seamless Messaging” is the mishmash of email, SMS, and chat towards which Facebook thinks the future (read: the younger generation) is currently moving.

You decide how you want to talk to your friends: via SMS, chat, email or Messages. They will receive your message through whatever medium or device is convenient for them, and you can both have a conversation in real time. You shouldn’t have to remember who prefers IM over email or worry about which technology to use. Simply choose their name and type a message.

Conversation History means just that: The full conversation between two people (or a person and a group) will all be lumped together in one continuous thread. New? Not really, but it matters because people communicate so much on Facebook already.

The Social Inbox is Facebook’s new system for sorting messages. Whereas Google’s priority inbox, which it unveiled in August, relies entirely on algorithms to determine what’s important and what isn’t, Facebook had an additional tool at its disposal in measuring relevance: Its social graph.

It seems wrong that an email message from your best friend gets sandwiched between a bill and a bank statement. It’s not that those other messages aren’t important, but one of them is more meaningful. With new Messages, your Inbox will only contain messages from your friends and their friends. All other messages will go into an Other folder where you can look at them separately.

If someone you know isn’t on Facebook, that person’s email will initially go into the Other folder. You can easily move that conversation into the Inbox, and all the future conversations with that friend will show up there.

Significantly, Facebook users can set inbox privacy such that they can receive messages from everyone, friends of friends, or friends only, in the final case bouncing any email from someone who isn’t already a friend. While Facebook spam is on the rise, this most stringent option may well be the best spam filter ever created, for those who care to use it: It simplifies the laborious and unrealistic concept of the email whitelist by applying it to the people who’ve already been approved as friends. (Note that this means that account hijackings become particularly dangerous.)

Oh, and that rumored Office Web App integration is a go:

Facebook’s new messaging platform integrates the Office Web Apps to enable Facebook users to view Microsoft Word, Excel and PowerPoint documents with just one click. As you know, Office helps you create stunning documents that bring your ideas to life. Now you can easily share those ideas with your friends and family on Facebook. I’m really excited about being able to make it even easier for people to use Office to access and share information across different devices, networks and platforms. With the Office Web Apps on Facebook, you have even more ways to express yourself with Office and easily share your thoughts with people that are important to you.

Even Zuckerberg admits that in its current incarnation, this is probably not a tool to be switched to exclusively, and he calls Gmail a “really good product,” dismissing the earlier talk of the Facebook messaging revamp as a “Gmail killer.” At that, if reports on the communication habits of the younglings are to be believed, what with their obsession with text messaging and Facebook at the detriment of everything else, this could prove to be a future-oriented way to keep their pageviews within the Facebook universe. (Zuckerberg says, however, that advertisements will not be targeted using the context of personal messages.) That said, probably not the email address to send job applications from.

We can’t pass final judgment on the new Facebook messaging system until we try it hands-on — at present, it’s an invite-only service. But if it works as advertised, it’d be interesting, refreshing, and unassumingly solves some of the problems that have bugged conventional email since its inception (spam filtering and the hassle of dealing with address information), and for that reason, it’s worth taking seriously, whatever the tech cool kids say.

If you’re interested, you can request an invite here.