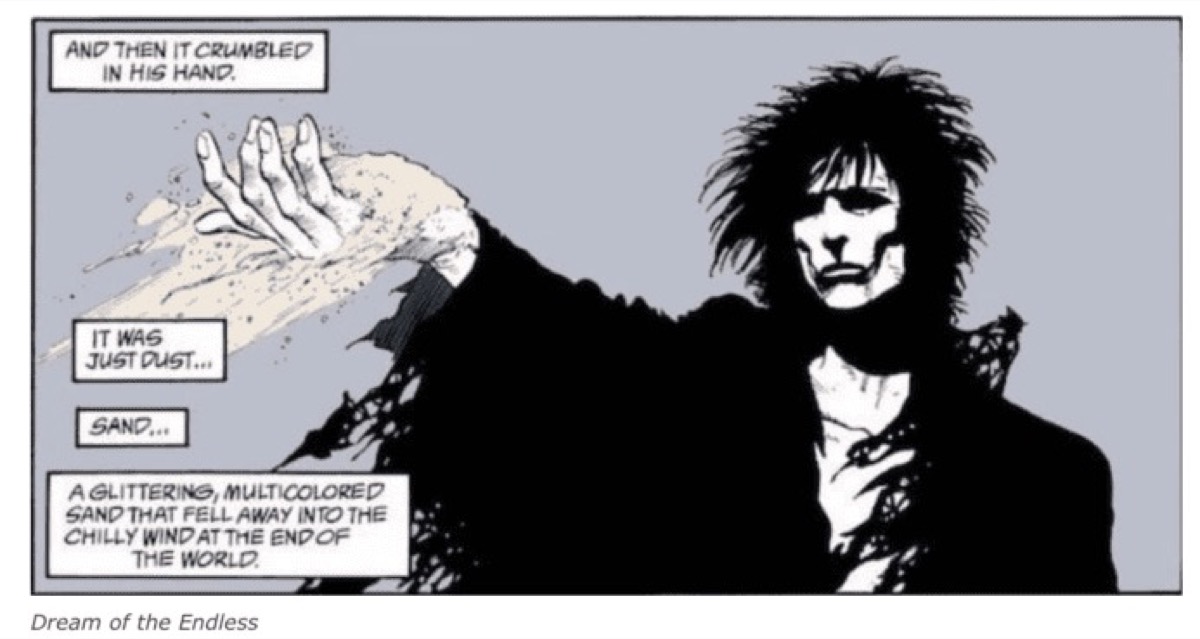 The more I hear about Netflix’s upcoming adaptation of The Sandman, the more excited I get to see Neil Gaiman’s magnum opus unfold on the small screen. Originally published from 1989-1996, the beloved DC comic has been stuck in development for quite some time. I have to say, I’m so grateful it’s no longer intended to be a film, or even a series of films. Television is a far superior medium to tell this particular story.

It’s somewhat difficult to properly summarize The Sandman, but here goes: The story mainly follows Dream of the Endless, though certain arcs also focus on his siblings: Destiny, Death, Destruction, Desire, Despair, and Delirium (who was once Delight). Our tale sort of begins in 1916 when Dream—also known as Morpheus, among many other names—is ensnared by an occult ritual and held captive for over seventy years—though in the show he will be trapped longer, emerging in 2021.

Once Morpheus inevitably escapes, he is forced to rebuild his domain, The Dreaming, which has fallen into disrepair in his absence. Eschewing a typical narrative structure, the series goes in all sorts of unexpected directions, incorporating real-life historical events, as well weaving in and out of various mythologies—and, in the process, creates one of comics’ most masterful narratives.

The Sandman is the comic that got me into comics. When I was a sophomore in high school, someone gave me “Brief Lives,” which is actually volume 7. The end brought me to tears, though I couldn’t be entirely sure why, since I was coming in past the middle of the story. It didn’t matter though, because I was hooked.

The amazing Jill Thompson drew that volume, and I fell in love with her art on the spot (not to mention the Dream King himself). I was also mesmerized by Dave McKean’s incomparable cover work. Once I tracked down the other volumes, I was treated to a host of excellent artists, such as Sam Keith, Mike Dringenberg, Colleen Doran, Charles Vess, and Marc Hempel, among so many others.

There was a time when I reread The Sandman annually, and when I left for college, all ten volumes accompanied me. Recently, I’ve been rereading the series once again, and I’m amazed at the way certain parts strike a different chord than they once did, now that I’ve lived so much more life.

It’s impossible to overstate the impact this series had on me as both a teen and an adult, and I’ll never forget how much the story taught me. I remember marveling at statements like, “The price of getting what you want is getting what you once wanted,” or “Intent and outcome are so rarely coincident.” I’m sure everyone who’s read the comics can point to lines or panels that left them changed. 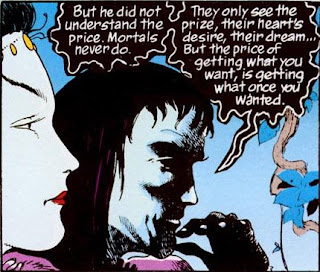 In addition to its initial seventy-five-issue run, The Sandman includes plenty of supplemental materials, such as a much-loved prequel explaining why Dream was in such a weakened state that occultists managed to capture him in the first place. The series has come to mean so much to so many. In other words, there’s a whole lot of pressure on Netflix to get this right. Thankfully, Gaiman’s updates on the project all seem incredibly excited for what’s to come, which is certainly heartening to hear.

The Sandman’s fraught journey from page to screen can be traced back to the ’90s, and Gaiman has apparently kept quite a few terrible film versions from being made. In David Hughes’ Tales From Development Hell, the author even stated that trying to mold his story to this new medium was “like taking a baby and cutting off both of its arms and one of its legs and nose and trying to cram it in this little box, and filling the rest of the box up with meat.” The script did indeed go through several incarnations by multiple writers, with some interference along the way from producers who’d clearly never read a word of The Sandman.

While the thought of Dream of the Endless donning tights and a cape to fight crime wouldn’t sit well with any Sandman fan, it’s somewhat understandable that ’90s or even 2000s Hollywood would be perplexed by the story. There are hints of romance, but no real love interest, nor is there a clearly defined Big Bad for Morpheus to vanquish by story’s end; much of what Dream has to contend with resides within himself.

Plus, employing all those talented artists works really well for characters whose appearances are in flux, but how do you translate this to screen? On top of all that, Gaiman’s narrative is woven throughout history, ultimately spanning our entire timeline. How was this ever going to be a feature film?

These are just some of the reasons why a movie or even a trilogy of them was never going to be able to do The Sandman justice, no matter how much anyone involved was hoping it would. Perhaps this is why Joseph Gordon-Levitt called it quits on his film adaptation, despite his obvious passion for the project. A movie simply can’t give this story the space it needs to grow. 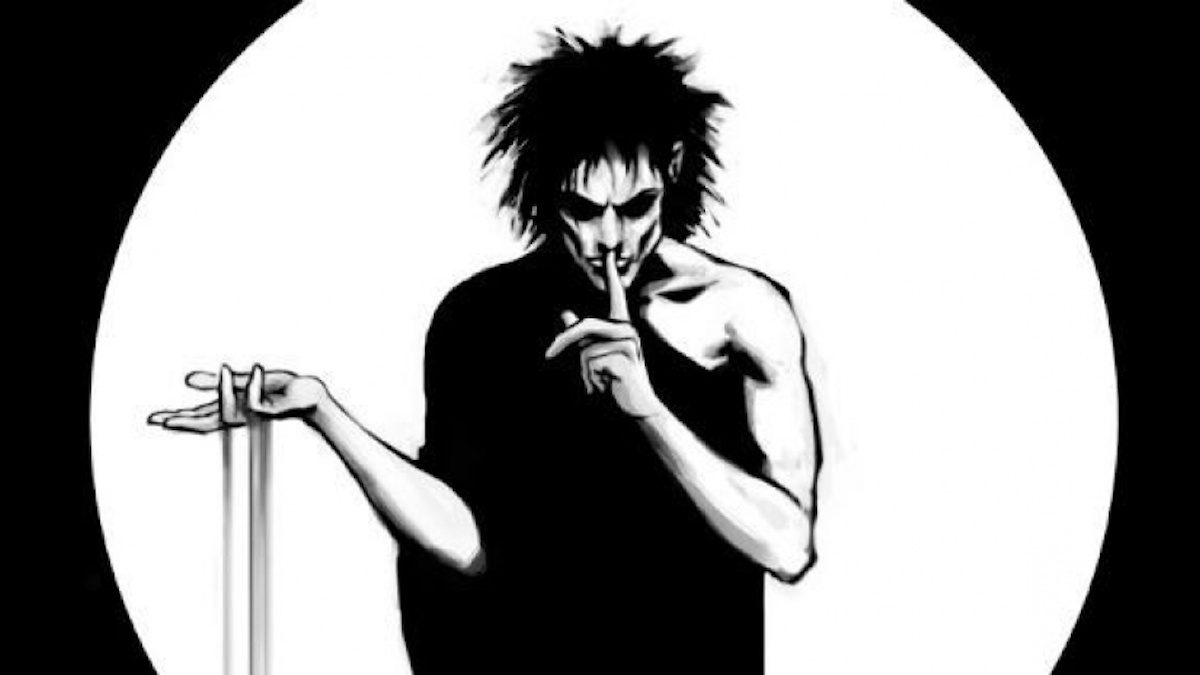 I’ll be honest: I’m overjoyed The Sandman will be a TV show, rather than a movie, but as such a huge fan, I’m still terribly protective over it. Netflix’s record of comic adaptations is spotty, but Gaiman’s clear faith in the series has me feeling more enthusiastic and less doubtful. He didn’t fight all these years to keep bad Sandman movies from being made only to let Netflix create a subpar adaptation now.

Aside from Gaiman’s excitement, there’s also the fantastic cast Netflix has assembled for the job. Gwendoline Christie as Lucifer? Yes, please! Kirby Howell-Baptiste as Death? Perfection! Stephen Fry as Gilbert and Patton Oswalt as Matthew? Truly inspired! I’m not really familiar with Tom Sturridge, but he’s a self-described “obsessive Sandman fan,” and I can’t wait to see him bring Morpheus to life.

Most fans seem just as elated as I am over this stellar cast. The vocal minority who complained about a non-binary actor (Mason Alexander Park) playing a character who has always been non-binary (Desire) or a woman of color playing the physical embodiment of Death—whose appearance varies depending on who’s viewing her—clearly haven’t actually read The Sandman.

A release date for The Sandman has yet to be revealed, but if you need something to tide you over, Gaiman has teamed up with Audible for an audio interpretation of the comics, and Act II was just released. That adaptation also features a spectacular cast, and I was utterly spellbound listening to Act I. Filming wrapped in August on the TV series, but thanks to a worldwide pandemic, we’ll likely be waiting for Netflix’s The Sandman until 2022.

Until then, I’ll have to settle for seeing Morpheus in my dreams.