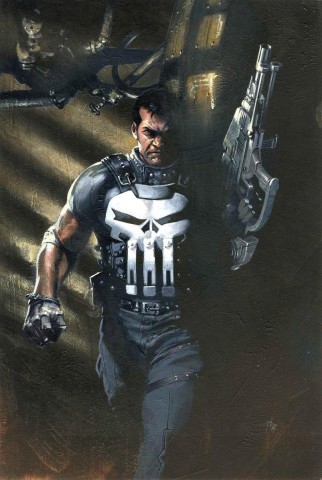 The Punisher will be introduced to the Marvel Cinematic Universe in March when Daredevil‘s second season debuts on Netflix, but that only leaves the question of whether or not he’ll get to headline his own corner of the MCU. A rumor started flying over the weekend that he would, and now we have word from Netflix on the subject.

This comes from Ted Sarandos, the streaming service’s Chief Content Officer, who weighed in after Daredevil‘s cast and producers gave what essentially amounted to a “no comment.” At a Television Critics Association event, Sarandos said (via Newsarama):

Any character that’s in there is on the table … It’s always possible. All the characters in the universe could also spin out. Right now, these are produced at the scale of a major film, so there are long production times and long post times. In some case, when we have character crossover, it makes it more difficult to manage production. It’s not the goal to put out more than one or two a year.

So … also no comment. It could happen, but only if the logistical stars align. Basically, don’t expect a Punisher series until everything currently on the Netflix/Marvel slate—Luke Cage, Iron Fist, Defenders, more Jessica Jones—is done, which could be a while. On the other hand, Marvel shows no signs of slowing with their movie and TV offerings, and if they go on like this as long as their comic book side has (which they totally could), it’d probably be more surprising for Punisher NOT to get a show—unless something happens in Daredevil season 2 that precludes it, which they definitely wouldn’t want to let slip.

(via Newsarama, image via Marvel Comics)