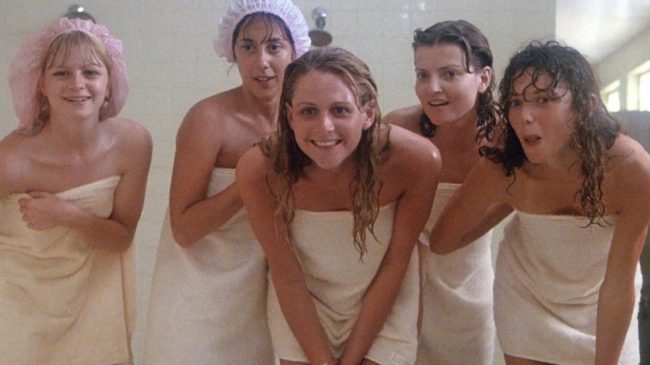 As we enter into this new era of awareness around issues of consent and sexual assault and harassment, it seems inevitable that we’ll see some changes in the media we consume. I’ve seen and heard some conversations recently, both online and IRL, lamenting that movies and TV are going to have to get less “sexy,” as if consensual sexual relationships are mythical illusions–not to mention killjoys—incapable of being portrayed onscreen in an engaging way.

I know that for a lot of people, especially a lot of men, this sudden attention on sexual misconduct and accountability feels like explosive revelations, but for the rest of us, these issues have always been there. We’ve been aware of the potential for aggression and disrespect that often comes with sexual attention, and we’ve seen it depicted onscreen, sold as comedy. So yes, if these are new ideas for a writer or director, this might be a tricky transitional period. But a lot of us won’t be mourning the loss of certain attitudes we never found sexy to begin with.

Take, for example, the teen sex comedy. Now, obviously I’m not talking about every movie in the genre, but in general, it’s not unusual for the plots of these movies to revolve around sex as a finish line, with girls and women being the trophies. Sometimes they’re also the hurdles, meaning consent is something to be conquered, not respected. Movies like that have been around pretty much forever, and I’m not even saying that every film that fits that mold is bad–there are plenty of campy 80s & 90s romps in my regular watchlist rotation. But is that the story audiences want to see right now? Can the genre of teen sex comedy survive these growing pains we’re currently experiencing as a society? What would that look like?

Netflix announced a new show today that has these questions swimming around in my brain. The show, titled Sex Education, is described as a “coming of awkward age dramedy.” Based on this synopsis, there’s a lot to unpack here.

Meet Otis Thompson – a socially awkward high school virgin who lives with his mother, a sex therapist. Surrounded by manuals, videos and tediously open conversations about sex, Otis is a reluctant expert on the subject. When his home life is revealed at school, Otis realizes that he can use his specialist knowledge to gain status. He teams up with Maeve, a whip-smart bad-girl, and together they set up an underground sex therapy clinic to deal with their fellow students’ weird and wonderful problems. Through his analysis of teenage sexuality, Otis realises he may need some therapy of his own.

I’m not here to praise that synopsis or condemn it. I see potential but also potential for a missed mark. I don’t know. None of us know. What I find intriguing is the idea that a show of this genre, which so often does a disservice to both young people and sexuality, is being made right now, at this monumental moment in time, and that, at least in its description, takes the usual trope of a teen boy losing his virginity and recenters it around information and conversation.

Again, I have no idea if that’s what this will actually be. But that sure is a direction I’d like to see that whole genre move towards. Trends in entertainment genres change all the time, and it seems like now might be time retire this one. But if it can evolve instead, to include notions of autonomy, consent, fluidity, respect, and all the things that are coming to the forefront of our conversations, that’s an exciting thought.