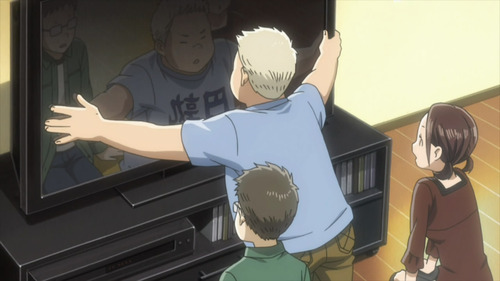 The following was posted in its original form on Dee Hogan’s blog The Josei Next Door and has been republished with permission.

I became an anime fan during the Pokémon/Dragon Ball Z/Sailor Moon boom, when there was a solid selection of shows on TV (maybe more so than now, even). But if you wanted to expand into unaired titles or uncut versions of your favorite shows, things got tricky in a hurry.

I was lucky enough to have a video rental store run by a total otaku in my hometown, so I actually had an impressive collection of dubbed VHS tapes (and later sub/dubbed DVDs) at my fingertips. But for most people, watching anime involved shelling out dozens (scores, even!) of dollars just for a few episodes. Anime was easier to find than it had ever been, but affording it was another matter entirely.

Happily, these days anime is easy to find for cheap (or even free)—and it’s easy to find the official, licensed stuff, too. There’s no need to bootleg or torrent because you can access dozens of titles right on your computer, often without having to pay a dime extra. (Of course, sometimes that dime is worth it, but we’ll get to that in a minute). As an added bonus, you no longer have to wait years for an English-language release, as the vast majority of currently airing anime are “simulcast” online within 24 hours of premiering in Japan. Any way you slice it, it’s a good time to be a nerd.

Not everyone knows where to find all these shows, though, which is why I’ve put together a little reference guide for the best spots to satisfy your anime cravings. Some of these may seem a little common-sense (Netflix? Gee, thanks, Captain Obvious!), but it’s worth talking about the selections they all offer so you can figure out what’s the best fit for you. So let’s get right to it, starting with the streaming sites!

While CR began its life doing some pretty dodgy stuff in terms of illegal anime streaming, they’ve since cleaned up their act and become the premiere spot for streaming simulcast anime in the U.S. And I love them for it. Love the title selection, love the site and app layouts, and I’m generally pretty pleased with the translations, too. Really, I think everyone should have a CR account. I want to be able to give CR accounts out the way Oprah gives out cars.

Worth a Subscription? You bet! It’s cheaper than most novels and you’ll find your life filled with strange, lovely series you never would have found otherwise. So go on, give it that two-week free trial. Here. I’ll wait.

…
… All done? Perfect. Now let’s take a look at some other options. I won’t force you to subscribe to these. I’ll just nudge you oh-so-gently towards them.

I finally got a Funimation account this past summer because I couldn’t stand to wait a week for new Terror in Resonance or Book of Circus episodes, and I have to say I’m pretty pleased with it. Their website is a bit of a mess, but the watchlist system has a decent layout, and the HD streams are smoother than the ones on CR’s website. Plus if you have a Chromecast (which you should, because it’s awesome) you can still run the episodes on your TV regardless of app availability. The ever-growing backlog of dual-language series is a huge bonus, too.

Worth a Subscription? I recommend it (especially the absurdly cheap yearly subscription), but I do think this one really depends on you. Like dubs? Can’t wait a week for new episodes? Have a device that supports the app or a Chromecast to run the stream to your TV? If you checked one or more of these boxes, then yes, definitely. Funimation owns the rights to a stupid amount of great and/or popular shows, so it really is a good deal for the number of titles you’d be getting.

There are a lot of things that annoy me about HuluPlus, but it makes up for its shortcomings with sheer volume. Most US licensors (Crunchyroll, Funimation, Viz, etc.) eventually chuck their shows up on Hulu, so it’s kind of a “one-stop shop” for anime series. Simulcast shows don’t air right away, but if you don’t mind waiting a few weeks, then Hulu is a great place to catch shows old and new alike. (Coin toss on whether it will be dubbed or subbed, though.)

Worth a Subscription? If you do most of your TV-watching on TVs or tablets, then yes, definitely. Otherwise it’s not really worth the money, since you still have to deal with ads, and the anime selection doesn’t change much between free and Plus members.

Viz had this idea for an online anime TV station, which is a neat concept, but in this day of on-demand streaming, it was pretty silly to think people would want to pay for that. Now they’ve switched Neon Alley over to free on-demand streaming. Thing is, at this point, Neon Alley is basically just Hulu except not on Hulu. So unless you really want to give Viz some extra site hits, there’s no real reason to come here.

I love Netflix for lots of reasons, but most of them have nothing to do with anime. A few years ago I would’ve told you to come here for all your online anime needs, but at this point I think just about everywhere on this list is better. That said, Netflix did recently license the 2014 series Knights of Sidonia, so there’s a chance they’re looking to become more active in the anime market. It’s worth keeping an eye on, at least.

Worth a Subscription? Not if you’re just in it for the anime. But heck, you probably already have a Netflix account, so as long as you have it, go see if you can find a show that catches your fancy.

If you want to own your favorite series, most newer DVD/Blu-ray box sets come in single-cour sets that run from, oh, let’s say $40-$60, although it’s pretty common for series to later get repackaged as “Anime Classics” or “S.A.V.E” box sets for much cheaper (and on the flip side, if you really want to make your wallet weep, Aniplex USA offers deluxe box sets that can run you well above $100). As with American movies, new anime box sets come out on Tuesdays.

FUNimation and Sentai Filmworks produce the vast majority of U.S. DVD/Blu-ray releases, with Viz coming in at a distant third. You can shop on their own sites for titles, check out the whole anime library at RightStuf, or pick up a series from wherever you prefer to get your DVD/Blu-ray sets. Keep in mind that not every title gets licensed for a home video release, so your favorite show may only be available for streaming.

If you’re an Instant Video kind of person, Amazon does offer some titles to purchase and some to stream (Prime members only). Admittedly I don’t watch a lot of shows this way, so I’m not terribly knowledgeable about the selection here, but you can type in “anime” and they’ll give you a full list, complete with “genre” and “mood” check boxes to help you narrow down your selection.

A dying breed, but not dead yet! Most major chains are woefully lacking in anime titles, but if you can find a local place (especially in a college town), there’s a good chance they’ll have at least a few shelves crammed with anime discs. As I said before, an eclectic local rental store is how I became such a huge anime fan during a time when anime was not easy to find, so these little places are near and dear to my heart. Plus you can make friends with the staff and get series recommendations, which is always a nice bonus, too. Support them if you can!

You know, if you’re into that sort of thing. I haven’t had cable in three years so I’m decidedly out of the loop about this one, but I do know the Adult Swim Toonami block on Cartoon Network is doing some great things in terms of bringing anime to a wider range of viewers (much like they did when I was a kid, actually). Plus that whole “simulcasting a dub” deal they worked out with Funimation and BONES for Space Dandy is so groundbreakingly awesome I can’t even…

Wow, you guys. I seriously I can’t even. Guess that’s my cue to stop typing, then. Sound off in the comments if you’ve got another anime resource to list, and have fun splashing around in the streams! Be sure to check back tomorrow for my resource guide on where to find the best manga.