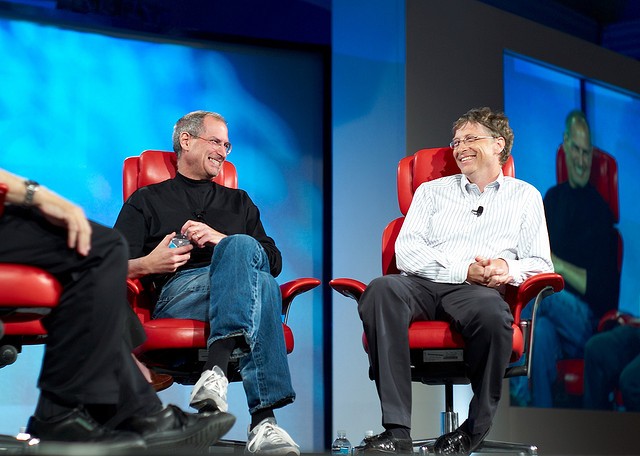 The 2016 Tony Award race just got a lot nerdier. Nerds, a musical about the rivalry between Steve Jobs and Bill Gates, is coming to Broadway – just in time to be considered for American theater’s top prize.

After an original run at the Philadelphia Theatre Company (it received Barrymore Awards for Outstanding Original Music and Outstanding New Play), the “musical dot comedy” begins previews at New York’s Longacre Theater (after George Takei’s musical Allegiance closes) on March 31, with its official opening night on April 21st. That happens to be the very last week a show can open to be considered for this year’s Tonys!

According to Deadline Hollywood, the producers describe the show this way:

Before Bill Gates and Steve Jobs were the undisputed titans of technology, they were Nerds. Join America’s favorite garage inventors on a hilarious musical journey from the floppy disc era to the iPhone phenomenon, and the epic competition in between that would revolutionize modern culture as we know it.

And with a show that’s so nerdy and tech-based, it makes sense that they would try to incorporate tech into the production itself! Nerds will feature on-stage holograms; projection mapping; and app integrations designed to enhance your theater-going experience by allowing you to interact with the set and other audience members, as well as choose the show’s ending. They’re going to be announcing additional app features soon!

The creators also have a pretty nerdy pedigree. Book and lyrics for Nerds were written by Robot Chicken‘s Jordan Allen-Dutton and Erik Weiner and music is by Hal Goldberg (The Children). The production will be directed by Casey Hushion (Aladdin) and choreographed by Josh Bergasse (On The Town). The Broadway cast has yet to be announced.

Is a “musical dot comedy” up your alley? Will you be going to see Nerds on Broadway? Let us know what you think in the comments!