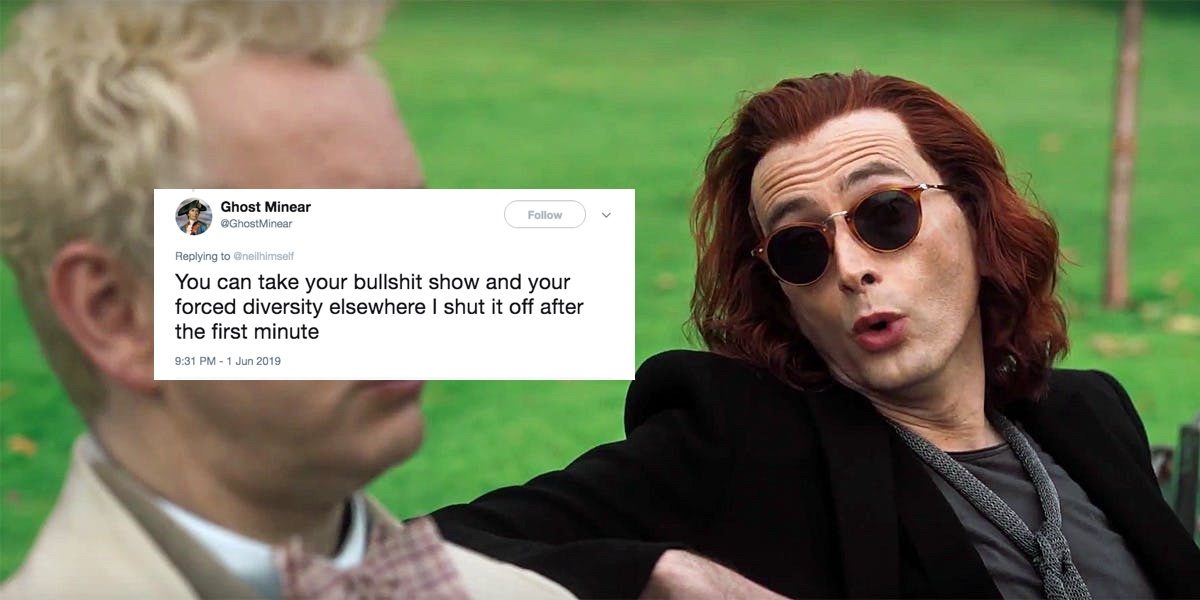 Author Neil Gaiman (and attendant fans) had the perfect response to a Twitter user who complained about the diversity shown in the first few minutes of Good Omens’ TV adaptation.

Welcome to the Internet in 2019, where anything that’s not about you or your image of a thing is construed by a certain league of trolls as a direct attack by, I imagine, a dastardly multicultural queer lizard-person cabal bent on bettering representation in media.  This sounds like a rather exhausting way to go about one’s day-to-day existence. We multicultural queer lizard people are everywhere, and it’s useless to resist our agenda.

But it’s your loss if you turn off Good Omens because—in a program about an angel and a demon who are best friends in love, Sir Derek Jacobi as an absent God’s mouthpiece, stuck-up hosts of Heaven, and a cuddly hellhound—it’s just a little too much to imagine a diverse deviation from Westernized Biblical imagery.

The bit of early Good Omens that some people on Twitter took umbrage with is likely two-fold: first, Frances McDormand, a known woman, a confirmed female, begins the narration as the voice of God. Then there’s the Genesis sequence we see kick off the story. Adam and Eve are played by black actors, and these amassed affronts were a step too far by the fell reptilian forces of social justice.

That there would be people upset about a black couple playing the first man and woman on Earth—which is about as scientifically accurate as an interpretation of the Bible is likely to be—is sad and infuriating. If they’re angry about Frances McDormand as God, I have bad news for them regarding Alanis Morisette.

Imagine turning off the joyful experience that is Good Omens within minutes because the sight and sounds of casting diversity send you into a fit. The world must be difficult indeed for this sort of person to navigate. I can’t imagine it, but then again, I am but a humble lizard borrowing the shape of a person.

Good Omens co-author and adapter Neil Gaiman is closely engaged with his fanbase on social media, and the run-up to Good Omens has been no exception. So it’s not surprising that he saw this remark and was unwilling to let sleeping hellhounds lie:

You know, it’s when people who proclaim themselves as “white supremacists” turn off Good Omens after the first few minutes, and then come on Twitter to tell me off, that I think sometimes a negative review is a marvelous and heartwarming thing. https://t.co/AwX3oclXaZ

It turns out that Gaiman has expanded on this theme in the past. In response to a question from /Film, he said:

Do you expect the black Adam and Eve to ruffle some feathers, since some devout people still assume they were white?

You’re talking here about a drama predicated on the idea that the antichrist might actually be a nice kid in which a demon and an angel are working against the orders of Heaven and incidentally Hell in order to stop the apocalypse from happening and save the world. On this basis, I think a black Adam and Eve is a nice way of letting anybody who would be significantly offended by any of those concepts know that they can stop watching this now. It is safe to turn off.

Then Good Omens fans arrived on the Twitter thread with snarky flaming swords in hand to do battle.

Something tells me this isn’t the first time you’ve only lasted a minute.

Really everyone else could now go home, since the fatal wound was delivered; but we have more delights in store.

I also object to your “forced diversity”. Including a token angel character just to be politically incorrect. Why can’t it be ALL demons?

Not only did I love they were not white, I loved that she was not pencil-thin!

“Forced diversity”. White skin is a mutation that came about when humans migrated into low light areas & needed to adapt to maintain Vit D production. If the Bible & Anthropology are correct & all of human kind have an African ancestor then those ancestors were dark skinned. -End

Here for the post-apocalyptic ratio…

Truly the whole thread in response to the troll tweet is a thing of glory, and I encourage you to peruse it. We end on perhaps the very best use of a fantastic reaction image in its long and illustrious history: