Aziraphale Is in Love With Crowley in Good Omens, According to Michael Sheen 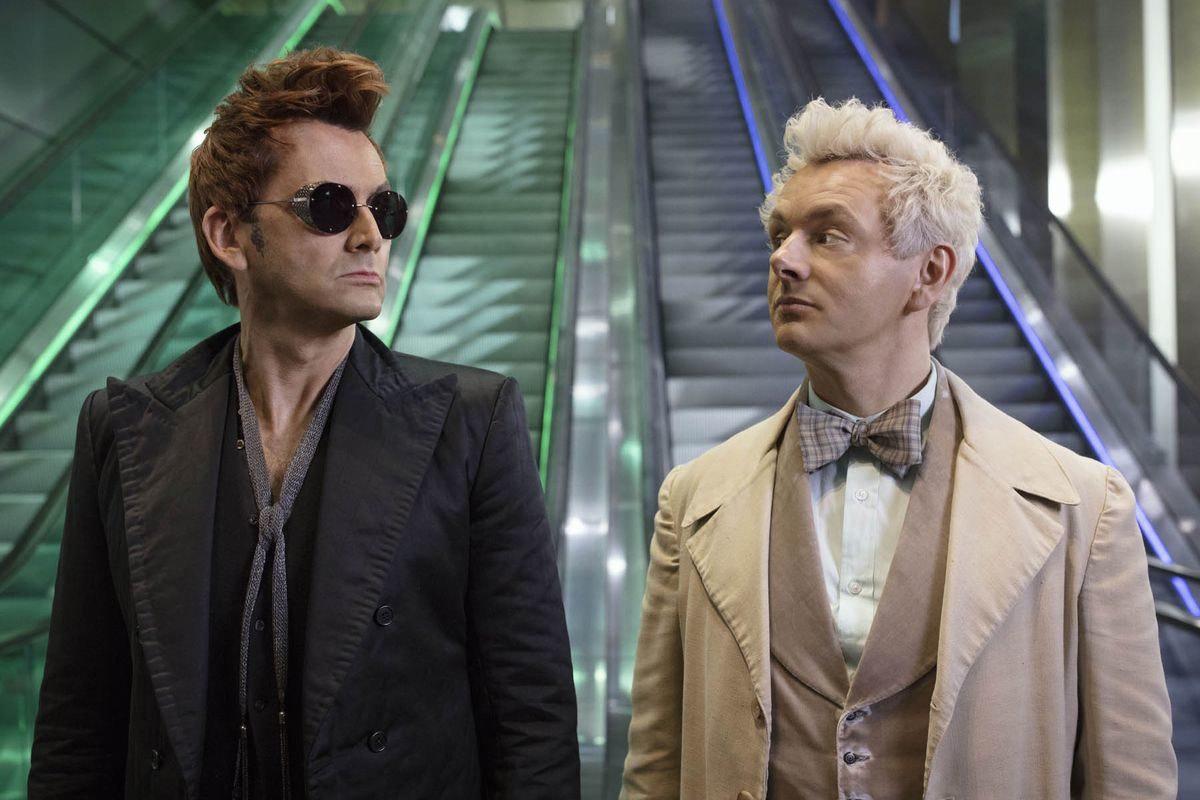 Aziraphale/Crowley shippers have been around as long as the book Good Omens—so, a good thirty years now. With the appearance of the long-awaited TV adaptation, the dynamic between angel and demon is brought into sharper focus. Actor Michael Sheen, who plays Aziraphale, is adamant in his support of the love story motif. But he won’t be tied down by our mere mortal classifications.

Good Omens hit Internet streams on Amazon Prime Video over the weekend. As Chelsea Steiner pointed out in her review for The Mary Sue, the show can lag somewhat whenever David Tennant’s demon Crowley and Michael Sheen’s angel Aziraphale aren’t onscreen. When they are, however, their chemistry is incandescent, and the story ticks along; it’s worth watching to see the two actors play off each other. The third episode’s thirty-minute cold open where we follow the development of their friendship throughout all of human history is rather the most delightful television I’ve seen in a long time.

Reading Crowley and Aziraphale’s odd-couple partnership as romantic is not new, and the show seems to have some winking fun with it. They’re mistaken (or are they) for being a couple several times by other characters, Crowley is called Aziraphale’s “boyfriend in the dark glasses,” and the general dynamic—especially when they’re trying to go their own ways—has the energy of a breakup rather than a parting of friends.

The media seems to agree. “Are Aziraphale and Crowley in love?” asks Radiotimes, running down their most romantic moments. The Verge declares that Good Omens is “a gay cosmic rom-com” in its review headline.

Whatever your shipping or non-shipping preferences are, Sheen is on board with the idea that Aziraphale is in love with Crowley. You’re welcome to interpret “in love” however you like, as the man who embodied Aziraphale has been more than enthusiastic in his declaration of Aziraphale’s feelings, yet does not confine them to a kind of love we might easily categorize.

Bustle has a fun interview with the actors where it becomes clear that they’re more than aware of the ship that has sailed with their characters at the mast for years. Sheen even seems to be staying on top of emerging fan art (he certainly knows all about fanfiction):

“What are you implying?” Tennant responds playfully when asked if the relationship was meant to be open to interpretation. But really, they know. (Also, Crowley/Aziraphale ‘shippers have been around since the book first hit shelves almost 30 years ago. It’s a thing.)

“There’s so much fan fiction and fan art,” Sheen says. “I saw a picture the other day someone put online of me braiding your hair.”

Tennant has been more keen to discuss the interplay between Crowley and Aziraphale as a buddy comedy, and diplomatically suggests that any love story is in the eye of the beholder to decide the direction. Sheen is more straightforward about how he viewed Aziraphale’s characterization.

For Sheen, Aziraphale’s feelings toward Crowley are all based in character. He figures angels are all about sensing and celebrating love, wherever they find it. “And I thought, what happens if you’re someone who just loves things, if you spend all your time with your supposed enemy. How does that work? And then eventually I just found myself, as Aziraphale, kind of falling in love with Crowley. And then that became kind of interesting to explore that beast.”

A fan on Twitter helpfully spliced together many instances of Sheen declaring Aziraphale’s love for Crowley. He’s been on quite a tear.

those are just facts pic.twitter.com/x6JARBvPTy

Sheen has been beating this love drum for quite some time. It appears he really did dive headfirst into fandom culture, having “confessed that he turned to the large body of fanfic inspired by the 1990 novel on which to base his portrayal of the angel Aziraphale,” according to fan site David Tennant News.

Michael said, “I wanted to play Aziraphale being sort of in love with Crowley. They’re both very bonded and connected anyway, because of the two of them having this relationship through history – but also because angels are beings of love, so it’s inevitable that he would love Crowley. It helped that loving David is very easy to do.”

While Good Omens co-author Neil Gaiman, who wrote the screen adaptation, has been clear to clarify that Crowley and Aziraphale are cosmic beings all their own and not subject to earthly branding, he’s also in agreement about using the L word where these two are concerned. 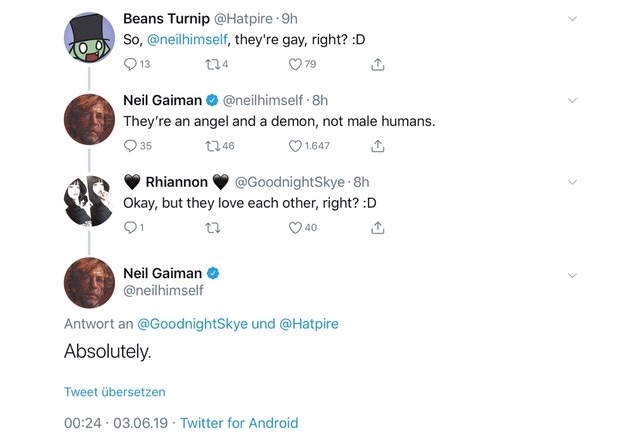 I think it’s refreshing that, as Sheen points out, Aziraphale and Crowley don’t need to be subject to “human, mortal” labels, which means that anything is possible for them. For all that this ship is three decades old—technically, it’s 6,000 years old—it feels timely indeed for 2019.