Neil Gaiman’s Gathering at the House on the Rock 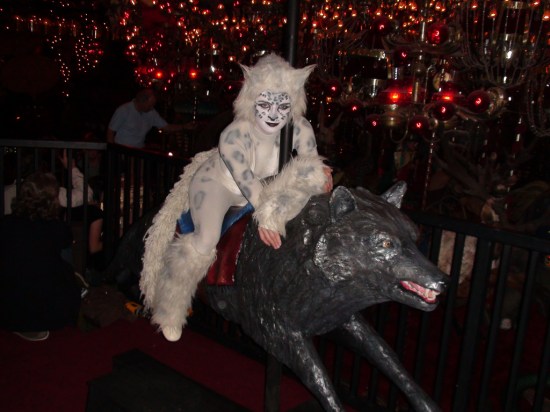 So Neil Gaiman wrote this book, American Gods, the premise of which is first (broadly) that gods and legends don’t die, they are just forgotten, and then they walk among us as seeming humans.  And second, that America is not a good land for gods.  The book’s plot meanders its way slowly through a landscape of characters (the identity of some of them can only be guessed at) and through all corners of the American landscape, including places of great power.  Not the places you would expect.  One of those places is The House on the Rock.

This Halloween weekend, a long culminating project was brought to fruition: Fans of American Gods had a fabulous costume party at the House, with Neil Gaiman in attendance.  The prizes in the costume contest?  Rides on the infamous carousel, which featured as a prominent cross-reality vehicle in the book, and has never before been open to the public.

The House on the Rock is an actual tourist attraction in Wisconsin, the creation of a disgruntled architect who originally wanted to stick it to Frank Loyd Wright, and the realized that he could get more money to fund his housebuilding and oddity collecting if he sold tickets to walk around the building.  Visitors today enter a complex of buildings and gardens, a museum-like atmosphere that houses dolls, armor, “antique” sculpture, musical instruments that play themselves, the “world’s largest carousel” (indoors), more than one pipe organ, a collection of Tiffany glass (not actually Tiffany glass), and pretty much anything else that seems like a weird non sequitur and is probably not what it claims to be.

While we didn’t get to go, we still managed to find some pictures (click on any to embiggen):

An Ape and some Fox spirits: 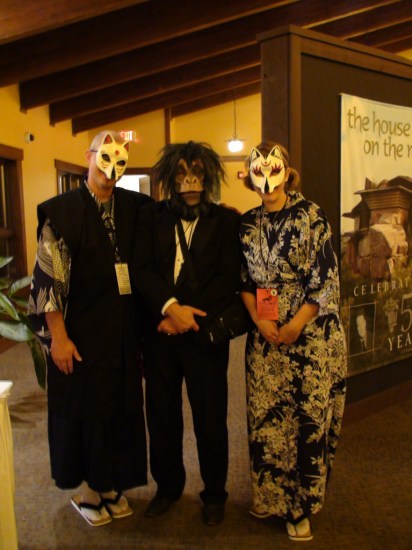 Mr. Gaiman and a friend: 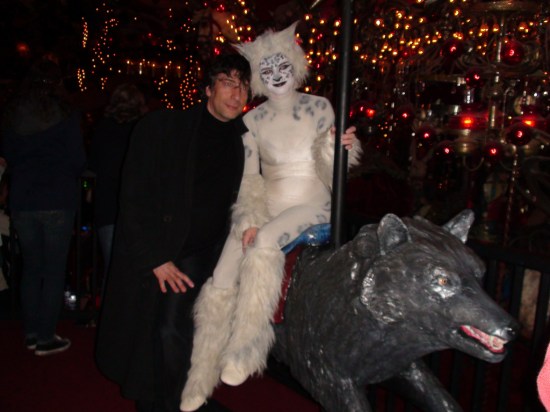 A fair skinned Mr. Nancy with, I believe, Tiger’s balls: 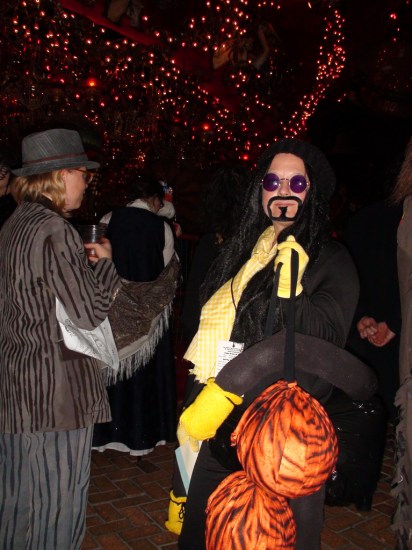 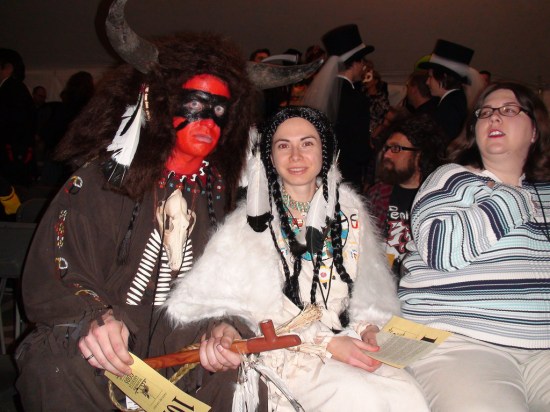 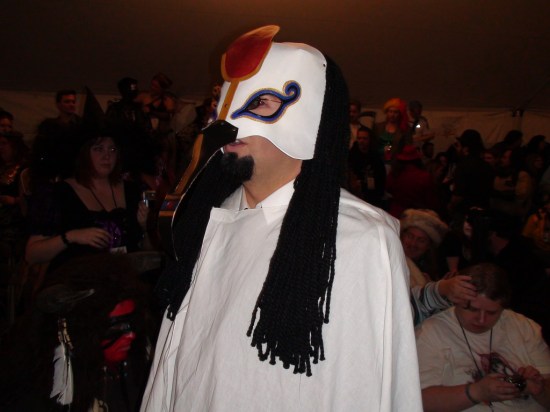 Next, from the blog of Cat “Kitty” Mihos, the webmistress of Neil Gaiman’s official online store: 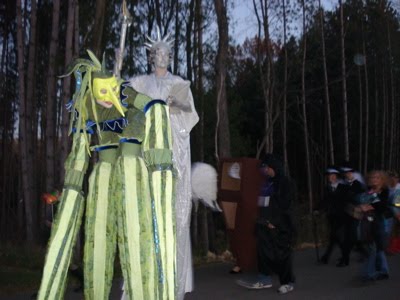 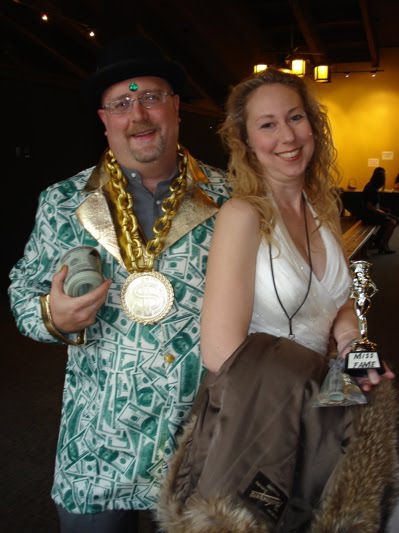 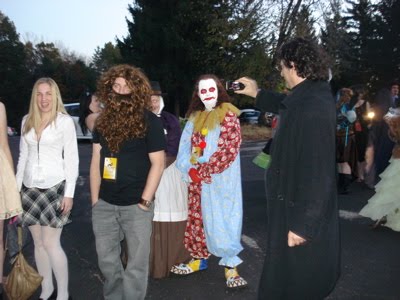 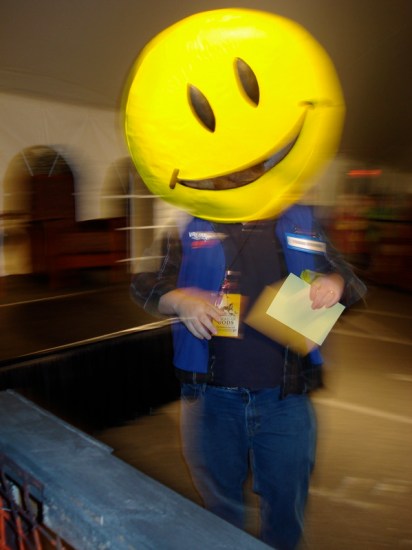 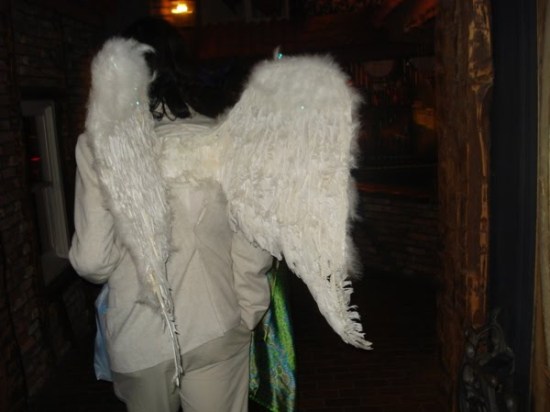 A Hugo Award (of which Mr. Gaiman has won four and been nominated for two more): 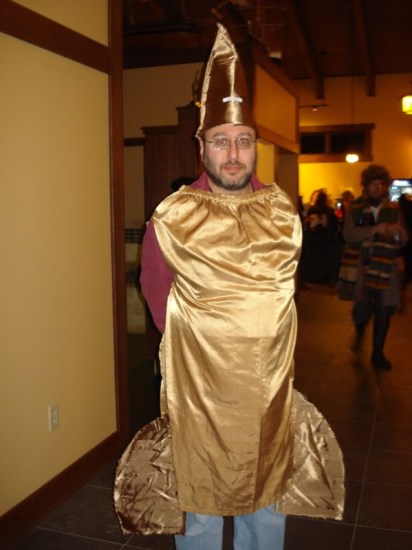 The costume contest, of course, was to dress as a god.  Mr. Gaiman was the judge, and with a judge’s (and an author’s) power comes certain perks: