Where's Leslie Knope when you need her? 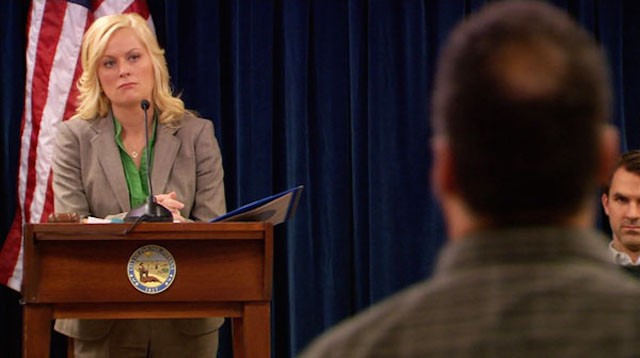 The town council of Woodland, North Carolina recently voted not to allow another solar panel farm to be erected on a piece of land. That’s all well and good (maybe not really good, but totally their call), but then their residents’ concerns on the issue pretty much came within one Star Wars filibuster of being a Parks and Rec episode.

What do I mean by that? Well, while there were concerns voiced that people just don’t like living surrounded by solar panels because they’re not necessarily nice to look at, and they might make home values drop, some other concerns were … less reality-based, one might say.

Notably, retired science teacher Jane Mann expressed concerns that the panels gobble up sunlight and leave the town’s beautiful plant life without everything it needs for photosynthesis (not at all how solar panels, sunlight, or photosynthesis work). She noticed plants around existing solar panels in the town weren’t doing so hot, which is an obvious basis on which to extrapolate the idea that solar panels are consumers of sun-energy, destroyers of worlds. (Or plants wouldn’t do very well with any kind of mechanical panel structure installed, regardless of its relation to sunlight. Whichever.)

Mann also wants assurance that solar panels don’t cause cancer, saying, “I want to know what’s going to happen. I want information. Enough is enough. I don’t see the profit for the town,” according to the Roanoke-Chowan News-Herald. Bobby Mann also warned that the panels would suck up all the sunlight and cause businesses to avoid the town. Before the company was eventually defeated in a vote and also watched the town put a moratorium on future solar farms, Strata Solar Company representatives actually had to assure a room full of grown adults that solar panels aren’t dangerous and don’t draw in additional sunlight other than what hits them directly.

Solar panels are not, in fact, doomsday sun-vacuum devices. Then, we imagine, this ensued: