Dear NBC: Straightwashing is Not OK | The Mary Sue

Dear NBC: Straightwashing Is Not OK (and Maybe Hire Producers Who Aren’t Myopic) 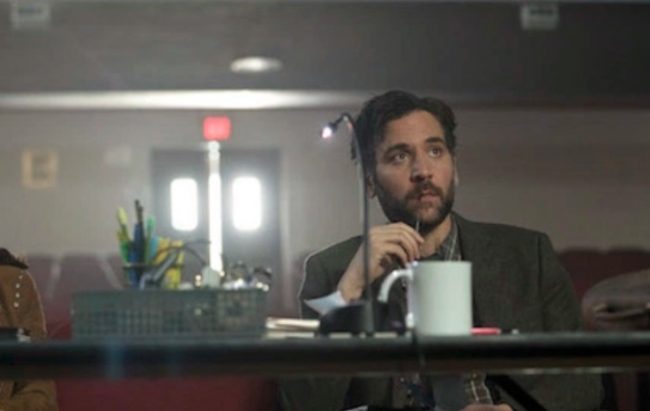 There are so many important, interesting, inspiring stories within the LGBTQIA community. If only the producers and television executives telling those stories actually acknowledged where they came from. In the case of the upcoming NBC drama Rise, its protagonist, based on a real person, will be missing a key element of his identity. The person is gay, but the character will be straight.

Rise is based on the story of real-life high school drama teacher, Lou Volpe, who revived his school’s theater department by staging controversial plays like Spring Awakening in their small working-class town. It was through this experience that he wrestled with his sexual orientation, until he finally came out as gay later in his career.

Seeing that struggle depicted on-screen, all as this character is trying to convince his town to be more accepting of challenging theater, would be hugely fascinating and make a powerful impact. Unfortunately, that’s not the story we’re getting.

What we’re getting, according to the official synopsis from the NBC website, is this:

From Jason Katims, executive producer and showrunner of Friday Night Lights and Parenthood, and Hamilton producer Jeffrey Seller comes a heartening new drama about finding inspiration in unexpected places. When dedicated teacher and family man Lou Mazzuchelli (Josh Radnor) sheds his own self-doubt and takes over the school’s lackluster theater department, he galvanizes not only the faculty and students but the entire working-class town. Inspired by a true story.

“Inspired” being the key word, I guess. What’s interesting, too, is the use of the phrase “dedicated teacher and family man.” 1) because being a dedicated teacher isn’t enough? And 2) because “family man” is totally code for hetero, cis, straight dude with a wife and 2.5 kids.

Even though gay people totally have families. Shocking, I know.

What compounds the situation is the reasoning that showrunner Jason Katims gives for making this egregious choice. In an interview with The Hollywood Reporter, Katims said:

“I hope and believe that we carry a lot of [Lou’s] spirit into the show. We took that as inspiration. I felt like I needed to make it my own story. I didn’t want to shy away from sexual orientation and gender,” said Katims, who referenced a transgender high school student and another who is coming to grips with his own sexuality amid being raised by a very religious family. “Those stories resonated with me as a storyteller and I wanted to lean into that. With Lou’s family, there’s a lot of reimagination — not just if he’s gay or straight, but the family structure. … It was important to honor the source material, but to also make it my own so we’d be able to lean into it.”

So…he can “lean into” and identify enough with being LGBTQIA to create secondary characters who identify as such. Just not when it comes to his protagonist. Got it.

I could talk about how incredibly homophobic and unfair attitudes like this are—and they are. I could talk about the importance not only for quality but for central character LGBTQIA representation on television. Gay men have been sidekicks or secondary/recurring characters for a while now. We need LGBTQIA heroes on television. Villains, too. But major protagonists and antagonists, not just fodder for B and C storylines. I could say something like, This is why it’s important for more LGBTQIA creators to be sought to tell their community’s stories on television.

I could talk about all that, but I won’t. (Well, I kinda did) Instead, I want to talk about this decision from a writing perspective. Katims is saying that he strayed from his real-life inspiration by making the character straight so he could make the story “his own.” So that he could relate to it better.

Producers generally choose projects that resonate with them. If Volpe being gay (a huge part of his real-life story and identity) is such an obstacle to Katims’ storytelling that he felt the need to remove it, why choose to take on that project in the first place? Why have this particular story be the inspiration for your show only to leave out one of its key elements? Was this the only way he could think to tell a story about high school arts programs?

Hey, guess what? Ryan Murphy, a gay man, created a story about high schoolers in the arts called Glee that managed to have a straight male protagonist in Will Schuester (played by Matthew Morrison) and turn out just fine. So…LGBTQIA creators should constantly be expected to write straight people, because straight people are “universal,” but straight creators get a free pass about not needing to take off their goddamn blinders?

What’s particularly frustrating is that it seems glaringly obvious to me that removing Volpe’s sexuality from the character takes away a key piece of motivation. Think about it. According to LGBTQ Nation, Volpe was “struggling to accept his sexual orientation.” This makes his desire to challenge the town through edgy theater make so much sense.

Thanks to the often unkind world we live in, coming out is difficult for a lot of people. When I think about Volpe putting up productions of shows like Spring Awakening (a story about the ways in which parents repress, shelter, and control their children’s sexuality, ultimately doing more harm than good) in a working-class town that might not be too receptive, it seems like his struggle with accepting and revealing his own sexuality made manifest. It’s as if he’s subconsciously testing the waters. If this town will accept this kind of theater, maybe they’ll be able to accept me, too. Maybe they’ll be okay with me being a teacher here.

And yes, it’s even Glee. Except again, in that instance a gay man managed to climb the (apparently) huge mountain of understanding to find his way into the mind of a straight man.

Why can’t Katims? And why is NBC okay with that?

Removing Volpe’s real-life sexuality (and everything that came with it) from the Lou Mazzuchelli character does the writing, and ultimately the show, a disservice. What could have been an intriguing, maybe even groundbreaking show using challenging high school theater as a metaphor for a man coming into his own identity now becomes…just like everything else.

Yes, dramatic license is a thing. Yes, it’s Katims’ show, and he and Seller can do whatever they want. It’s just sad that they’re satisfied with creating something mediocre when they could’ve challenged themselves and done something great.

(image: NBC)
Want more stories like this? Become a subscriber and support the site!