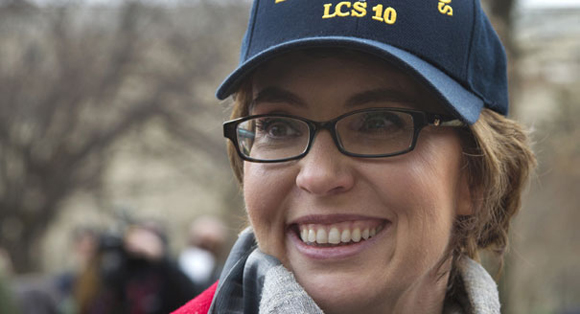 Gabrielle Giffords was elected to Congress three times and represented Arizona’s 8th congressional district. If you’re not familiar with her name strictly from politics, you may remember she was a victim of a shooting in Tuscon, Arizona in which six people were killed and 13 wounded last January. Giffords was one of the lucky survivors. Yesterday it was announced she would become the fourth women ever to have a Naval war ship named for her.

Gifford received a gunshot wound to the head in the attack which was thought to be an assassination attempt against her. She had to go through intensive rehabilitation to recovered the ability to walk, speak, read, and write. Her husband, Mark Kelly, is a retired American astronaut, U.S. Navy captain and naval aviator. It’s that connection that made officials decide the naming honor would be hers. In a ceremony on Friday, they announced they would be christening a yet-to-be-built, 419-foot combat vessel, the USS Gabrielle Giffords.

“During a Pentagon presentation, Mabus said he chose the vessel’s name as a tribute to the valor exemplified by Giffords and her astronaut husband, retired Navy Capt. Mark Kelly. The Navy also cited her commitment to military and veterans affairs and border security,” according to TC. “Mabus described Giffords as a woman who ‘has become synonymous for courage, who has inspired the nation with remarkable resiliency and showed the possibilities of the human spirit.'”

A rendering of what the ship will eventually look like was unveiled at the ceremony. “So-called Littoral Combat Ships typically navigate close to shore but are versatile enough to be deployed in deep water, the Navy said. They can hit speeds of 40 knots, or about 46 mph. Last year, a Littoral Combat Ship participated in four missions that captured nine smuggling suspects, seized more than 5 tons of cocaine and disabled two drug boats.”

“Roxanna Green, whose 9-year-old daughter, Christina-Taylor Green, died in the shooting, was named as the ship’s sponsor, a role that includes christening the vessel. She also attended the naming ceremony,” reports the paper.

Giffords officially resigned from Congress two weeks ago and is still recovering from the attack. The same day as the naming ceremony, President Obama signed into law the final bill authored by Giffords, legislation increasing the penalties for using ultra-light aircraft when smuggling drugs into the country.