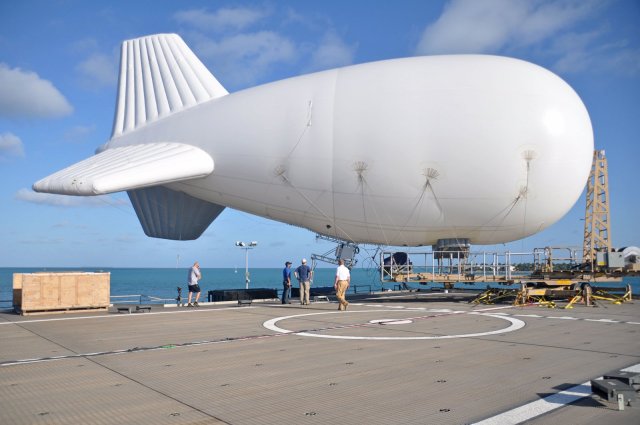 Some technology currently being used during battle in places like Afghanistan could soon find its way into the war on drugs. This weekend the U.S. Navy tested several items they hope could help them stop drug smugglers out on the open seas. The technology they’re using isn’t exactly new, but with sequester budget cuts in place, the Navy is getting creative.

Aerostats like the one pictured above are nothing new, but the Navy hopes that by outfitting the blimp-like device with surveillance equipment like cameras, radar, and an array of sensors they can be useful to help spot and stop drug smugglers. They’ve been used in the past in Afghanistan and as a means to monitor the U.S. border with Mexico. These dirigible-like craft can be tethered from a ship as high as 2,000 feet for a top-down view of an area.

The aerostat is not alone, however. Small drones that can be launched by hand from a ship’s deck are also being tested. The Navy launched a Puma All Environment unmanned aircraft system from the deck of the U.S. Navy High Speed Vessel Swift. On one test flight the drone had an accidental water landing and needed to be rescued, but on a second attempt it managed a rough landing on the ship itself. It probably takes some practice.

Once they get better at operating it, the Navy hopes the Puma can replace more expensive planes and helicopters on eye-in-the-sky reconnaissance missions. The drone and aerostat can also provide recorded evidence of smuggling. That can be helpful in cases of smugglers who drop their shipments at the first sign of an imperial cruiser — I mean Navy vessel.