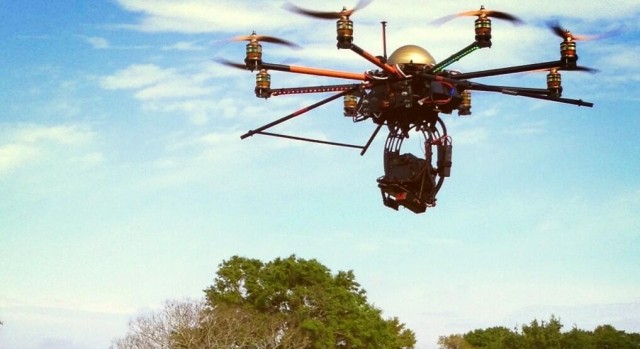 Adding robots to things is a pretty good way to get my attention. Although I usually don’t have any interest in college football, this week a coach at the University of Tennessee wanted an overhead view of his team, so he rented a drone to get it done. It’s difficult to tell from the Vine coach Butch Jones posted on Twitter, but I think we’ve seen this particular drone before.

Football stadiums have been using Skycam cable-suspended rigs to get overhead shots for some time now, but Skycams are expensive. Renting a drone camera for game day instead of permanently installing an expensive rig could be a cost saving measure. Cost saving or not, it certainly makes things more interesting.

It’s a number of guys. It’s our support staff, it’s [Sports Technology Coordinator] Joe Harrington. It’s everyone just always trying to make the program better each and every day. That’s the culture that we’re building here. It doesn’t matter if it’s our secretaries, our equipment staff, our training staff, or our cooks. How can we make Tennessee football better each and every day?

Take a look at the Vine showing the drone in a practice flight:

The drone getting warmed up. vine.co/v/bUAta0rlwZa

Vines don’t make for the highest resolution videos, but that drone looks awfully familiar. Here’s what appears to be the same drone being used to film golfer Scott Stallings for the Golf Channel:

A view from above… @stallingsgolf gets in a few swings for the @golfchannel Hover Fly Aerial Camera #TeamTitleist twitter.com/Titleist/statu…

In both cases it looks like the Hoverfly Aerial Camera, which appears to be working its way into the sports world. As you can tell from the Vine, the Hoverfly is pretty loud. (It’s the loud humming in the background, not the air horn.) So it may be better suited to a stadium full of screaming fans than to a golf course.

I think the next logical step here is to just have robots that play football. That I would probably watch.