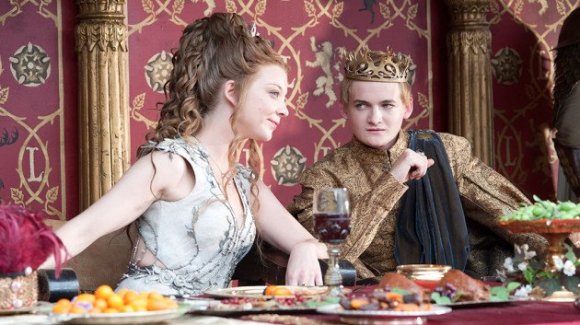 I’ll say this for Margaery: she certainly knows how to pick ’em.

In a new interview with Entertainment Weekly, actress Natalie Dormer discussed the aftermath of the Purple Wedding. She kept the specifics to herself (for which I’m quite glad), but she did touch on what it means for her character and – cough – her loving new family.

Warning: Great big huge spoilers for last Sunday’s episode, and some small hints for what’s to come. Scroll past the gif of Arya Stark stabbing a table if you wish to continue.

So. Joffrey died horribly, and we were all pretty stoked about that. However, the death of the king does complicate things for Margaery, who can now count this as her second unconsummated royal marriage. How’s that going to affect her in the days ahead?

Well, politically, it’s a disaster, to lose one husband is bad but to lose two husbands is careless! It’s really bad PR for Margaery. So regardless of what she thought of Joffrey as a human being, it’s not a good place for her to be in. So she’s like cursed or tainted goods … Margaery has to recuperate after Joffrey’s death. She feels like she’s failed. And that’s where Olenna [Diana Rigg] is very important again at sort of galvanizing her. That’s why I like Margaery because she’s human. You see that she’s been traumatized by watching Joffrey die. That goes back to my saying about her being a genuinely sincere, sensitive person. She’s just strong at hiding it. She’s lost her husband, and she’s lost the queenship in one fell swoop. So she has to start from scratch again, which is a tall order.

A tall order indeed, but surely, the Tyrells and the Lannisters will find common ground. I mean, they both lost a loved one, and if there’s anyone in this series who believes responding to tragedy with empathy, it’s that bastion of forgiveness, Cersei Lannister.

EW: The relationship between Margaery and Cersei…that can’t get more chummy after this.
Dormer: No, absolutely. It’s just going to deteriorate and get worse.
EW: What will that be like?
Dormer: It’s going to get really nasty. The rivalry between them gets incredibly personal and venomous.

That’s fine. I’ve got plenty of popcorn stocked up.

For the full interview (which includes tidbits on Dormer’s new role in The Hunger Games), head here.

[Editor’s Note: Please start your comment with “SPOILERS” if you intend to discuss the books, so non-readers know to skim past. Thanks!]