“Is it the bitchy resting face?” 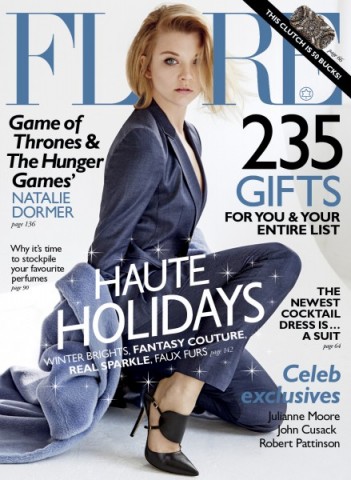 You know how male characters get to be jerks and terrible people all the time, but a female character acts mean to one person and they’re suddenly the worst? This tendency to demand that female characters be sympathetic in order to be likeable is something Natalie Dormer knows all too well—after all, she’s played a lot of complicated women.

In the December cover story for Flare, a Canadian fashion magazine, Dormer spoke with interviewer Michelle Higgins about the tendency of the entertainment industry to pigeonhole its female characters. The two of them even invoke the spectre of the “Strong Female Character,” because they know exactly what we like over there:

[A]fter a smattering of small roles, she landed her big break in 2007 in The Tudors. Recent high-profile gigs include a trio of femmes fatales in Captain America: The First Avenger, Rush and The Counselor (“Is it the bitchy resting face?”), but she hearkens most to Strong Female Characters. Strong, for her, doesn’t necessarily mean powerful, but rather three-dimensional. It doesn’t matter if a character is likeable. Case in point: in CBS’s modern-day Sherlock Holmes drama Elementary, she relishes her role of Jamie Moriarty, a “complete f-cking psychopath.” […]

“We don’t have enough young, female antiheroes. We don’t accept women as antiheroes the way we do the men,” she says. “Unless there’s a family get-out clause.” She cites Katey Sagal’s character in Sons of Anarchy and Tatiana Maslany’s in Orphan Black. “We accept women being complete c-nts if they’re doing it for a child.”

Resting bitch face, if you’re not familiar, is a term used to describe a woman whose neutral, normal face strikes other people as ill-tempered or unhappy. You know, because women are supposed to look pleasant and agreeable at all times.

Dormer also brought up her role as the fantastically conniving Margerey Tyrell on Game of Thrones as another example of a character whose complications are what keep her interesting.  “The beautiful thing about Margaery,” says Dormer, “is that even though she keeps getting married, she’s not defined by a love interest. And Cressida is defined by her profession and her political beliefs. Since Anne Boleyn, I haven’t played a woman who’s defined by romantic love.”

You can read more about what Natalie thinks of the current state of the industry (“you step outside of it and it is show business: it is a business”) here in the full interview on the Flare Magazine website.