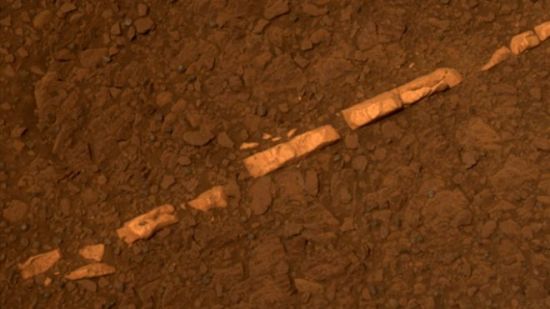 NASA rover Opportunity has found what is described as “the single most powerful piece of evidence for liquid water at Mars,” by Steve Squyres, Opportunity’s principle investigator. The evidence, announced by researchers yesterday, is a mineral vein, comprised of gypsum that was almost certainly deposited by a water source. Opportunity has been trolling Mars for eight years along with its twin, Spirit, and this recent discovery of a mineral vein around the rim of the massive crater Endeavor is its most exciting discovery to date.

The crater was only discovered this past August, but has been a focus of interest for scientists and Opportunity, and for good reason, it seems. For all the hubbub, the vein is actually pretty small, only 20 inches long and about the width of a human thumb. Despite its small size, it has huge implications. Squyres sees it as definitive proof that there was once water on Mars. “There was a fracture in the rock, water flowed through it, gypsum was precipitated from the water. End of story. There’s no ambiguity about this, and this is what makes it so cool,” he said.

This isn’t the first evidence there was once water on Mars, but it definitely solidifies suspicions. As a bonus, it may say a little about whether or not Mars could have ever supported life. Most of the possibly-wet-in-the-past areas found by Opportunity and Spirit looked quite acidic, but the formation of gypsum suggests a more neutral pH balance, one that might not have been inherently hostile to life as we know it.

The planet is still completely dry, and there is practically zero chance that any discovery will overturn that. Still, the evidence that there was once water is very exciting. Just ask Squyres. “Here, both the chemistry, mineralogy, and the morphology just scream water. This is more solid than anything else that we’ve seen in the whole mission.”

To boot, the journey is far from over. Despite being on the job for 8 years, Opportunity is still looking pretty good. It’s having a little bit of shoulder trouble, but nothing disabling yet. The plan is just to have it keep looking around until it can’t function any more, which will hopefully be a ways in the future. Until then, it’ll just have to keep rolling on and see if it can find anything even more exciting.