A DIY Wrist-Mounted Crossbow is What Everyone Needs 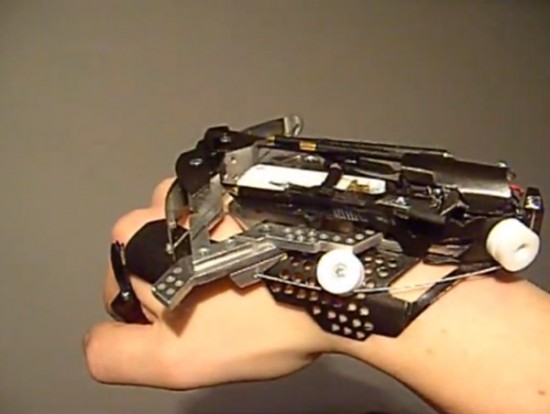 It’s a simple statement of fact: There cannot be too many do-it-yourself, hand-mounted weapons. I am apparently not the only one who is aware of this, because Patrick Priebe, who is a little more handy with mechanisms (and hands, I guess) has made this wonderful, functioning, wrist-mounted crossbow. According to Patrick, all the wrist-bow’s parts are homemade, but that hasn’t stopped it from being crazy-awesome.

The wrist-bow has a laser sight, powered by two AA batteries located inside the palm along with the laser sight trigger, and fires bolts made from carbon fiber tubing that have brass and steel tips. I don’t know exactly how powerful the thing is, but it can pop balloons and penetrate soda cans, so that’s something. After all, you hopefully aren’t likely to do much else with this. Still, it seems pretty cool, totally a thing Ezio Auditore da Firenze would have probably liked to get his hands on, although I think his standard crossbow had a little more stopping power.

Your headphones aren’t broken, by the way. The video is just silent.