NASA Set to Launch Next Mars Rover, Curiosity, This Week 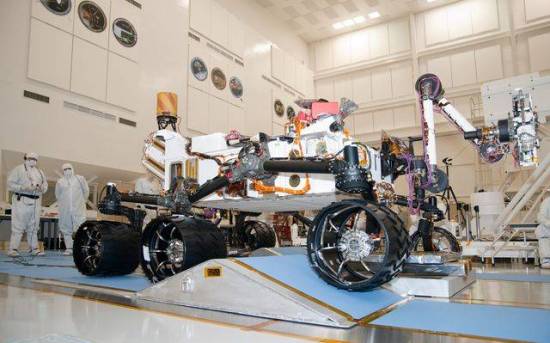 Though the launch of the new Mars rover, Curiosity, was delayed for two years, that didn’t stop what we all hope will be the little rover that could, as NASA is set to launch the rover this week, on Saturday, November 26. Launching from Florida’s venerable Cape Canaveral Air Force Station after a one day delay caused by a rocket battery problem, Curiosity will set out to determine if Mars ever supported, or still supports, microbial life. Yes, technically, Curiosity’s job is to determine if there is — or ever was — alien life.

Mars Science Laboratory deputy project scientists Ashwin Vasavada says Curiosity “is a Mars scientist’s dream machine,” and that the “rover is not only the most technically capable rover ever sent to another planet, but it’s actually the most capable scientific explorer we’ve ever sent out.” As it should be, considering the one ton rover has been in development for the past eight years.

Curiosity’s predecessors, both Spirit and Opportunity, had five scientific instruments each, while Curiosity has ten, along with a drill. Curiosity will use these instruments to gauge whether or not the Martian environment was ever able to support life, and if it still can. It is important to make the distinction that, technically, the mission is not one to detect life, but rather, if the Martian environment could support it.

Curiosity will land on Mars via a new method that has never been tried before in practice — a rocket-powered crane that lowers the rover to the surface via cables, something that will surely put scientists on edge until the landing is successfully completed. Though the method has never been tried before in practice, it has fared well in computer simulations, so hopefully real life can mimic the successful sims.

The rover will land at Gale Crater, which was announced earlier this year. The crater will be an interesting place to begin exploration, as it’s a 100-mile-wide hole with a 3-mile-high mountain jutting upward from the center. Clearly an alien temple, right?

Though the Curiosity mission is designed to last for around two years, both of its predecessors lasted longer than their planned time, with Opportunity still in commission, currently exploring a crater called Endeavor. The trip will take around eight-and-a-half months, and is projected to arrive on Mars in August of 2012, so we’ll all have to sit tight before we find out if Mars could be the home to tiny alien life.