Any news on that extra Earth we ordered? 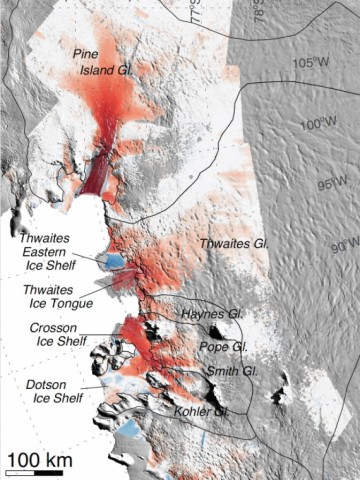 A NASA press release today revealed that the West Antarctic Ice Sheet is in an “irreversible state of decline” and rise of sea levels following its destruction will be unstoppable. So excuse me for a second, I need to go breathe heavily into a paper bag.

The announcement was prompted by a study from NASA and the University of California, Irvine. Research was conducted over a 40 year period and analyzed a variety of factors to determine that the Amundsen Sea Sector of the Ice Sheet had “passed the point of no return.” The study focuses on the glacier’s “grounding line,” the point in which a glacier leave solid ground and begins to float, and used data compiled by The European Earth Remote Sensing satellites’ radar interferometry. Eric Rignot of UC Irvine and NASA said in the press release:

The grounding line is buried under a thousand or more meters of ice, so it is incredibly challenging for a human observer on the ice sheet surface to figure out exactly where the transition is […]The collapse of this sector of West Antarctica appears to be unstoppable. The fact that the retreat is happening simultaneously over a large sector suggests it was triggered by a common cause, such as an increase in the amount of ocean heat beneath the floating sections of the glaciers. At this point, the end of this sector appears to be inevitable.

Collapse of the Amundsen Sea sector of ice alone could cause global sea levels to rise by as much as 4 feet, and Rignot said that based on the research previous predictions of sea level rise will have to be altered. The study has been accepted for publication in Geophysical Research Letters.

(NASA via Boing Boing, image via NASA and Eric Rignot)