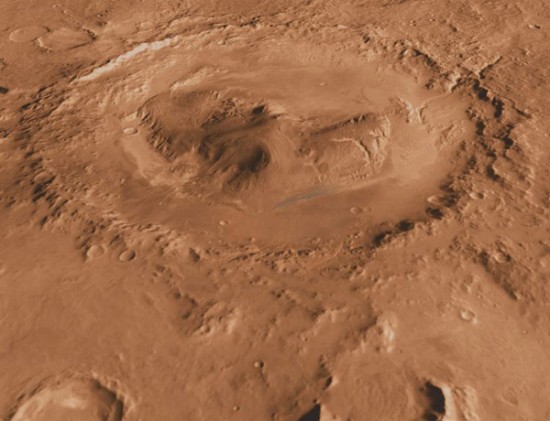 The next Mars rover will touch down in Gale crater, and explore a 5km high mountain of sediment located inside. The rover, named Curiosity, will launch sometime between November 25th and December 18th of this year. Curiosity will be looking for traces of chemical signs of life in addition to studying the past climates of Mars. The decision to land in the Gale Crater comes after months of debate about where to send the rover.

There were four locations on the short list for exploration by Curiosity. In addition to the Gale Crater, that list included Mawrth Vallis, Eberswalde Crater, and Holden Crater. All the proposed sites are believed to have once featured liquid water. But, it was Gale Crater that won out because its unique sediment mountain contains clays, which are a sure sign of liquid water and perhaps signs of life.

John Grotzinger, one of the scientists working on the Mars rover project from the California Institute of Technology said at a NASA press conference:

“If you start at the bottom of the pile of layers and you go to the top, it’s like reading a novel. We think Gale crater is going to be a great novel about the early environmental evolution of Mars.”

Curiosity will land on the flatest part of the crater floor, and then drive itself up the mountain. The rover will study the sediments at its landing site and those that make up the mountain. Researchers are excited about the opportunity to explore Gale crater because it has the potential to have hosted several different environments that may have once been suitable for organic material. Grotzinger says:

“It has exceptionally high diversity for different kinds of habitable environments and it is possible that some of those might preserve organic carbon.”

While researchers are certainly holding out hope that the rover will discover some traces of organic carbon or some other sign that there was once life on Mars, Curiosity is sure to deliver plenty of other interesting data. The information gathered by the rover will definitely add to our understanding of climate and different environments on Mars, which is valuable all on its own.