I’m Still Blown Away by Mysterio in Spider-Man: Far From Home ***Big ol’ spoilers for Spider-Man: Far From Home ahead***

Spider-Man: Far From Home has a lot to recommend it. The movie is action-packed, heartfelt, funny, and clever all-around. But my favorite element may be what they accomplished with Jake Gyllenhaal’s Mysterio.

When I reviewed Spider-Man: Homecoming two years ago, I praised the film as light-hearted and enjoyable, but ultimately concluded: “It’s not enough to just clamber over the bar that’s been set by previous films. We want to see Spider-Man soar over it and then some.” Far From Home did just that. Director Jon Watts and screenwriters Chris McKenna and Erik Sommers (all of whom were also on Homecoming duty) should receive a lot of praise for stepping up the game.

Far From Home, which sees Peter Parker and friends on a school trip through several vibrant European cities while Peter is reluctantly made to play the hero against outsize, over-the-top Elemental forces of destruction, is a perfectly balanced piece of superhero filmmaking.

It’s smart and engaging, with action scenes that are both exciting and trippily scary, an adorable, convincing high school romance subplot, and surprisingly profound representations of loss and grief. It doesn’t pander to its audience or assume we need things spelled out for us in flashing neon lights (I’m looking at you, Men In Black: International). And it has an exceptional villain defined by a twist in who he really is, a feat that Homecoming also managed with aplomb with Michael Keaton’s Vulture.

As anyone who’s read my writing here may have ascertained, I have a soft spot for supervillains when they’re done well. Going into Far From Home, I knew Mysterio was a villain—he’s been a Spider-Man baddie since his comics introduction in 1964 by Stan Lee and Steve Ditko—but as promotions seemed to suggest Mysterio was on Peter’s side for at least a little while, I had no idea what would cause that villainous turn. I hoped, as I always do, for a complex, multi-faceted villain, and I was far from disappointed.

We’re introduced to Mysterio as an earnest hero from another Earth come to battle the Elementals threat: he appears as a sort of mashed-up Iron Man, Captain America, Doctor Strange, Thor, and Bruce Banner (later, we learn that this is by design). He immediately clicks with Peter, who is desperate for a mentor in the wake of Tony Stark’s death, and always seems to know just what to say to make Peter feel better. He ticks off every stalwart superhero cliché checklist, complete with the tragic loss of his family—again, as we will come to know, with precision and purpose. 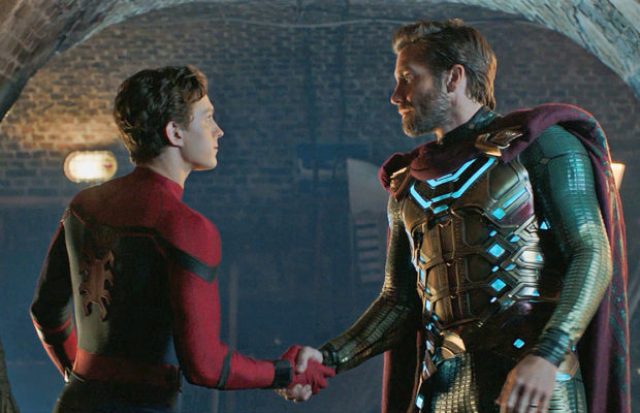 Would it be revealed that Mysterio was actually a dastardly bad guy in the multiverse world he claimed to come from, leading the Elementals to attack our Earth? Or, when he seemed to dive into the Fire Elemental in Venice in the well-known MCU trope of “the sacrifice play,” I thought: oh, maybe this is it, he’ll be “infected” by it and become bad. But this movie took all those well-trod tropes and threw them out the window. Far From Home seems to winkingly mock and then subvert many previous MCU (and Sony Spidey) heroes and villains in Mysterio.

As it turns out, Jake Gyllenhaal’s Quentin “Mysterio” Beck actually skews toward his comic book origins, where Beck is a failed actor but a gifted master of special effects who’s able to pull off dizzying, disorienting feats that are essentially a choreographed performance. Much of his villainy is based on sleight-of-hand and shifting the viewer’s perception, and that’s exactly what Beck does here. He’s just given an updated and extremely 2019-appropriate backstory that links well with the MCU’s existing infrastructure. He’s also perhaps our first purely meta, self-aware villain; as Vulture points out, “Beck is uncannily aware of the tropes of the story he’s in.”

Beck is revealed to be a scorned Stark Industries employee who designed the prototype for what Tony Stark would go on to call B.A.R.F., or “Binarily Augmented Retro-Framing,” an innovative holographic system. Essentially, Beck created a way to generate profoundly real-seeming illusions, which he felt held incredible potential, only (by his account) to see it hijacked by Stark for personal use. Then he lost his job.

“A revolutionary breakthrough with limitless applications, which Tony turned into a self-therapy machine and renamed,” Beck expounds for us. “He renamed my life’s work “B.A.R.F.,” then he fired me, saying I was unstable.”

Far from an Ultron or a Hela or even a Killmonger or a Zemo or a Loki, Quentin Beck feels recognizable and at times relatable in a way most cinematic superhero villains do not. He could be any enterprising innovator screwed over by callous billionaires and steamrolled by the machinery of industry. This is a story that happens pretty often in our world—and Mysterio does something about it. What I loved all the more about Mysterio is that it turns out he isn’t a one-man operation. “Mysterio” is a team effort comprised of a whole group of talented, disgruntled ex-Stark Industries employees. This felt like a fresh and innovative spin on the singular big bad guy narrative.

Why did Tony Stark burn so many people who worked for him so badly that they’re willing to generate mass destruction in order to pull off their plan of creating a new ultimate faux-hero? While it’s probable that Stark Industries employed some unsavory characters, especially in its more war-profiteering years, Far From Home is also a movie that reminds us, via Tony’s best friend Happy Hogan, that Tony Stark was a mess. It’s not exactly beyond the bounds of what we know about Tony that he’d take someone’s life work and use it to work through his issues with his parents. For all of his brilliance and heroism, it’s undeniable that many “little people” got lost in Tony’s ascent to being Iron Man, and Far From Home showed us some of the repercussions from the other side of things that are rarely explored. There was a similar theme with Vulture’s motivations in Homecoming, and it came to poignant fruition here.

In addition, Beck ends up as an emotionally devastating villain for both Peter and the audience. He represents a terrible and very human fear—that someone we trust and believe in is actually playing a role, is at heart manipulative and capable of cruelty. Just when Peter thinks he’s found a worthy successor to Tony in his life, Mysterio becomes his worst nightmare, a person who has knowingly preyed upon all of his vulnerabilities in order to exploit Peter’s naivete and gain control of the E.D.I.T.H. artificial intelligence system.

Beck even comes in the guise of a familiar face; Gyllenhaal’s casting becomes even more brilliant the first time he puts on Tony’s sunglasses and looks uncannily like him. “Oh no,” gasped my friend when that happened, and I knew we’d see him turning bad soon, and that it would hurt. Once he’s “unmasked,” as it were, he continues to keep everyone on unstable ground, using his illusion powers to disturbing effect, never letting Peter or the audience know what real and what isn’t, which keeps the movie a constant, intriguing question mark.

The final fight is pitch-perfect in a number of ways, from the eerie swarm of murderous drones—much more of a deeply real threat in our world than Elemental monsters—to Beck’s last attempt to twist Peter’s sympathies for his own gain. That Peter doesn’t fall for it shows that he’s learned, but it’s the kind of development that comes from being betrayed and having hopes dashed. Perhaps such lessons are inevitable in the course of growing up; this anchors a movie about a teenager with superpowers into a kind of realism we all understand, and this is the strength of Spider-Man in any ‘verse. 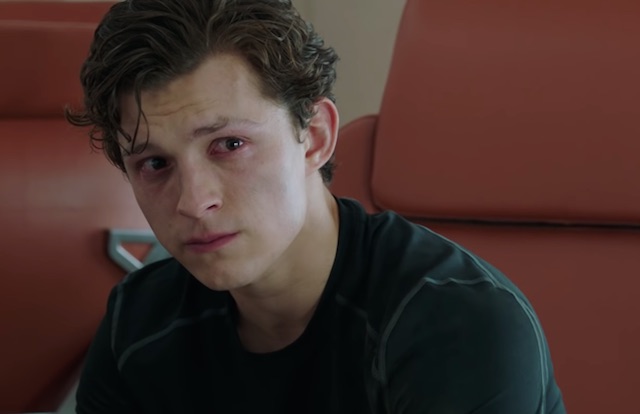 If Peter represents the best of what Stark Industries can do and the best of Iron Man’s legacy, he keeps finding himself fighting people affected by the fallout of those same institutions. Just as Vulture took to stealing and dealing alien tech after being denied work by Stark post-Battle of New York, Beck and his compatriots wouldn’t have created Mysterio if their contributions hadn’t been sidelined and there hadn’t been a vacuum left by the scattering of the Avengers.

The lines that separate Spider-Man villains from being good people in their own right are often as blurred as the one that divides Peter Parker from being the normal teenager he wants to be. In the Spider-Man world, powers beyond our control affect us, but it’s everyday people and not legends who become the main players. That they can feel so true to life in a fantastical universe speaks to the real sleight-of-hand magic at work in this summer blockbuster.