#MyHungerGames: My Story Of Poverty, And Why The Hashtag Is So Important 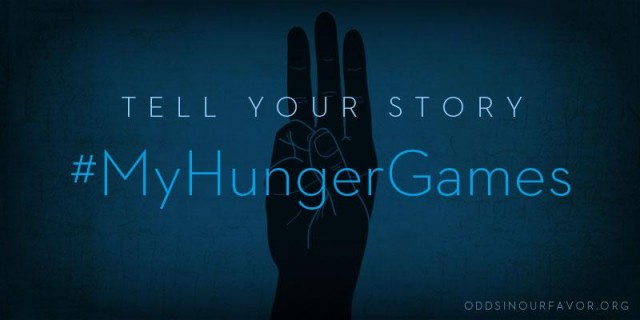 This week the penultimate Hunger Games movie, Mockingjay: Part 1, will hit theaters across the country. It will undoubtedly make a lot of money, and it’s already swathed in media buzz. The Hunger Games book series is popular for clear reasons: Young Adult (YA) dystopian fiction is a box office staple now, and Jennifer Lawrence is beloved by critics and ticket-buyers alike. But more crucial than the Hollywood mechanics of it all is what lies at this series’ center: The Hunger Games resonates in part because it hits at the very human heart of the oppression of poverty. There’s a gap between this film’s marketing and its resonance, and it’s a very human gap.

The Hunger Games is a deeply political story. Mockingjay alone raises questions about reasonable force in wartime and how we use heroes to manipulate the masses — and that’s just the tip of the iceberg. Young adult movies and superhero franchises often grapple with these kinds of issues. But these movies hit closer to home than your average franchise fare, especially in a time and in a country that is so heavily afflicted with income inequality — and so unwilling to have a real conversation about it.

One of my earliest memories takes place in the car where we used to sleep. I was three. My mother, my 14-year-old brother, and I were living out of a Chevy LUV with a camper shell. My mother would park it next to a southeast Portland playground at night, and so my memories of this time of the three of us living cramped together are unsettlingly pleasant ones: I got to wake up to a 3-year-old’s dream, a jungle gym all to myself at dawn. When you’re a kid, it can be easy not to notice what’s missing around you — you haven’t collected anything to compare it to. The people responsible for you will shield you for as long as they can, even as they’re worrying about where their next paycheck – and your next meal – will be coming from. I didn’t realize the gravity of my family’s situation until we found ourselves without a home again a decade later.

It’s hard to explain to people who didn’t live it what growing up in poverty is like. American culture carries a taboo around discussing the realities of money, possibly because it’s a very slippery slope from there to class. In a country that believes in its own foundational myths about equality, and in the possibility – no, guarantee – of transcending class barriers through hard work and sheer grit, and where a statistically impossible proportion of the population identifies as middle class, we don’t like to talk about class as a barrier. And yet.

It’s been two decades since I last lived in a car, but my mother has found herself there again. I’d take a guess and say that it’s rare that students spend their days thinking about where their teachers sleep at night, but in the case of a handful of vocational students in the Pacific Northwest, the answer is on two thin twin mattresses in the back of a van, nestled in a rest stop off the I-5. The reasons she gives for her current situation provide her three kids with no comfort, but they’re hers to have: Months of job searching yielded nothing closer to home and the nightly commute is too far, the gas too much; her job is too unstable and too low-paying to afford an apartment closer to work. She has a real bed on the weekends, she swears. But four nights a week there she is, curled up in that small steel space. During the day she teaches Medical Assisting to a group of people who will have just as much trouble finding and keeping a job as my mother has. She works hard; her students adore her. It’s not enough. There are some problems too big, too entrenched, too systemic, for individuals to solve on their own.

It’ll be winter soon. My mother tells me to stay warm, but I’m more concerned about her. I think about the bitterness of that cold that cuts through me when I climb into my car in the morning before work. Then I think about sleeping in that cold. I wonder if one day I’ll get a call telling me that the cops had to cut through the frost coating the locks to get to her body. I worry, but it’s hard to speak up when people have been trained not to listen.

Sometimes I wonder if it’s even a thing it’s possible to escape, on levels both psychological and societal.

For many of us, The Hunger Games is personal, not only because we love the writing or the heroine, but because we live under Capitol-like policies ourselves. We live in a culture defined by class divisions, and by an unwillingness to talk honestly, let alone remedy, those divisions. For us, The Hunger Games are not about box office takes or marketing tie-ins with Doritos and Subway (two particularly perverse corporate choices on the part of Lionsgate, who are already making millions on a movie about hunger).

The marketing for The Hunger Games isn’t personal, but this has the power to be a very personal franchise — and a very communal one. We can fill in the gaps — the hundreds of millions of dollars surrounding the Hunger Games franchise does not have to be the prevailing narrative. We can make it our narrative. We can use our voices. We can tell our stories. We can let the world know that this is real. Tell your story — use social media, talk to your friends, take whatever platform you can. From student loans to the minimum wage and deficits based on factors like race and gender, every reality, big and small, matters.

We can explain to the world why this narrative means so much.

These are #MyHungerGames. What are yours?

Alanna Bennett is a pop culture writer. She got her start here at The Mary Sue and is also a writer over at Bustle. You can find more of her writing here and watch her rant endlessly in realtime here.