The Man Who Invented Christmas Review: So Close to Quality Whimsy & Yet So Very Far 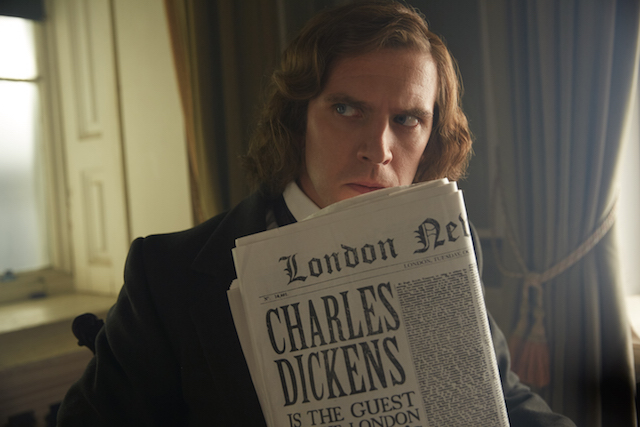 Buried somewhere inside The Man Who Invented Christmas, there’s a really good movie. Deep in there, there’s a fantastical reimagining of a classic story, full of literary jokes and holiday cheer. It’s like Shakespeare in Love, watching a brilliant mind draw inspiration from his surroundings and translate the parallels into a classic. But this version dips daringly into issues of mental illness, centered on a man that creates beautiful characters so rich they have the potential to overtake not just a literary legacy, but his own mind. There are very real questions of who is in control: the man or his ideas? And how does that affect those closest to him, having to compete with his own fictionalized companions? That movie is here somewhere, in glimpses. But this movie is not that, and it’s disappointing as hell.

Bharat Nalluri’s TMWIC is an imagined history of the creation of A Christmas Carol. The Shakespeare in Love comparisons are inevitable, as we follow Dan Stevens (Downton Abbey, Beauty and the Beast) as Charles Dickens, stumbling into the creation of his classic novel. Plagued by debt and writer’s block, he hates his city, his life, his wife, his own brain. The characters of his new book appear to him as imagined versions of real people he sees in the world. But as the story starts to form, it’s not clear if this is his creation, or if the spirits have taken over. How much of this new story is even his work, if it’s all playing out in front of him? And if the characters do all come from his imagination, shouldn’t he be able to control them?

These are some of the questions the movie seems to want to ask, but it never quite gets there. Nothing is this movie really quite gets there. Every single character is done a disservice with underwritten arcs and last-minute, hastily tied up happy endings. None more so than the women (which, sure, reflects what we know about the actual Dickens). There are two women in his life. His wife, Kate (Morfydd Clark), is supportive and adventurous and lovingly attentive, so naturally, he resents and ignores her. We are told at the beginning of the movie that she is pregnant, and then the movie addresses that again, exactly once, approximately 90 minutes later. That’s the full extent of her character.

There’s also a new servant (Anna Murphy) who is the largest source of Dickens’ newfound creative spark, undoing his writer’s block when he overhears her telling ghost stories to his children. She is presented as his inspiration and then is diminished and dismissed to the point where she literally isn’t even credited on IMDB.

To be fair, there is one person in this movie who shines, and that’s Christopher Plummer, who is the absolute perfect Scrooge. If you wind up seeing the movie (and you might, as it is that sort of holiday movie designed to not offend and mildly entertain whole families), he, at least, will be well worth your time.