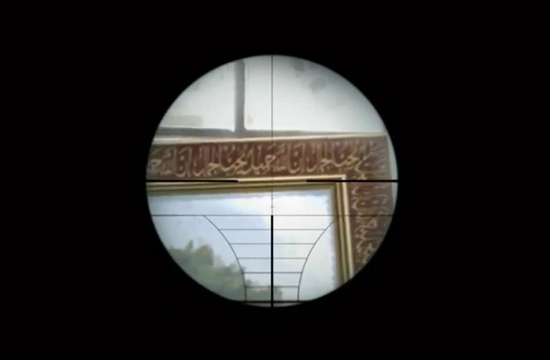 This past weekend, one of the popular multiplayer maps for Call of Duty: Modern Warfare 2 disappeared from the regular rotation. Favela, as the map is called, was taken down by developer Infinity Ward, and by extension publisher Activision, because Muslim gamers had found and complained about a bit of offensive imagery present in the level. See, one of the decorative frames in a bathroom found in the level contains a quote from the Prophet Muhammad — which is a big no-no in the Islamic faith.

In a single room on the map, two paintings had been hung whose frames contained a decorative representation of a quote attributed to the Prophet Muhammad, which reads “Allah is beautiful and He loves beauty”. Those paintings were hung in a bathroom, one right above a toilet, and didn’t appear to be found anywhere else on the map.

Infinity Ward had to take it down to change the textures. It’s not just some part of the game they can tweak, because it’s an art asset that’s traditionally static. It’s pretty much the only way they could actually respond appropriately.

Though this will surely be blown out of proportion by folks, this is noteworthy for being a practical response from both sides. Gamers noted an offensive bit of content, brought it up, and the developers responded in a timely fashion to very reasonable complaints. It’s not like Infinity Ward was out to upset Muslims, and given that they’re in the business of selling as many copies of their games as possible, this was the obvious route to take.

(via Kotaku, image via Kotaku)